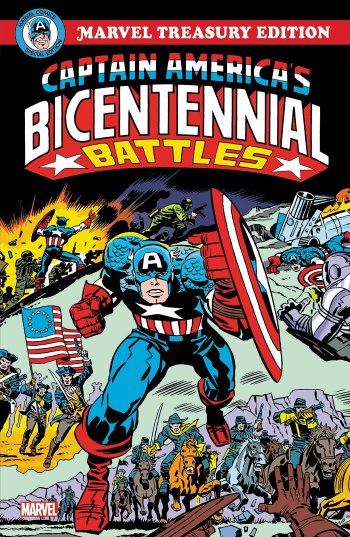 This one is a real treat.

I still have the original Treasury Edition, for which I gleefully plunked down a buck-fifty some 45 years ago, but this new edition is on pristine white paper that shows off the art in a whole new light, and there’s also the bonus inclusion of a few of the uncolored original art pages and Marvel’s 1976 calendar.

Now that we live in a world where failed actors go on FOX News and gripe about how the new Captain America comics (which they admit they haven’t read) have gotten “too political,” it’s nice to remember that Captain America was political the day Joe Simon and Jack Kirby created him, over 80 years ago, and that has never changed.

In fact, Captain America was not only always politically-oriented, most of that time he’s been a champion for hardcore progressive and liberal causes. The cover of his first comic book shows him punching Hitler…and that was a year before we entered World War 2, back when Republican forces wanted us to either stay out of the conflict or side with Germany.

This particular comic was created to tie-in with America’s Bicentennial, which was a marketing bonanza, and since Jack Kirby had recently returned to Marvel and was writing and drawing the regular Captain America comic (some 36 years after co-creating him), Kirby was assigned the task of telling a story about how Captain America relates to The American Dream. 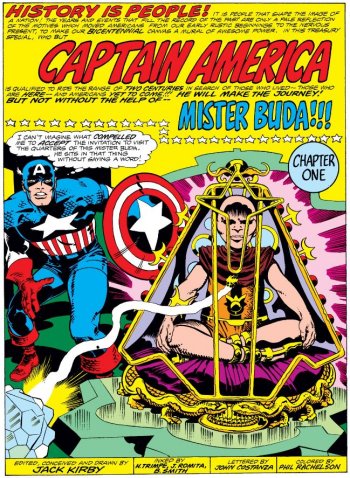 With elements of A Christmas Carol, This Is Your Life, and A Connecticut Yankee In King Arthur’s Court, we see Captain America transported through time for episodic adventures that demonstrate American ideals. He is reunited with his long-dead sidekick, Bucky, during World War 2. We seen him in pre-Revolutionary War Philadelphia, where his appearance inspires the design of the first American Flag.

We also see Captain America in the middle of the Indian Wars of the old West, flying an airplane during World War I, inspiring John Brown to become an abolitionist, witnessing the first atomic bomb blast and even inspiring a young newsboy in Mahattan’s Lower East Side to become a comic book writer and artist. That would be a young Jacob Kurtzberg (Jack Kirby) by the way.

This is all due to the mysterious Mr. Buda, who has summoned Captain America to his lair to send him on this metaphysical journey.

There are many folks in comics fandom who malign Kirby’s writing. I am not one of them. This story is very cleverly done, with a skeptical Captain being jerked around through history until he’s forced to learn the lesson he didn’t realize he needed to learn. Kirby’s dialogue is sharp and funny, with some outright satire mixed in to keep the pro-American message from getting too syrupy or insincere.

Captain America’s nostalgia for his sidekick is touching, while his reaction to Ben Franklin copying his costume for the flag is hilarious. Above all, Captain America’s Bicentennial Battles is a warts-and-all celebration of America. Kirby does not shy away from slavery or our horrible treatment of the Native Americans. The message is one of hope, but it’s not blind to our faults.

The folks at FOX News would probably hate this book. 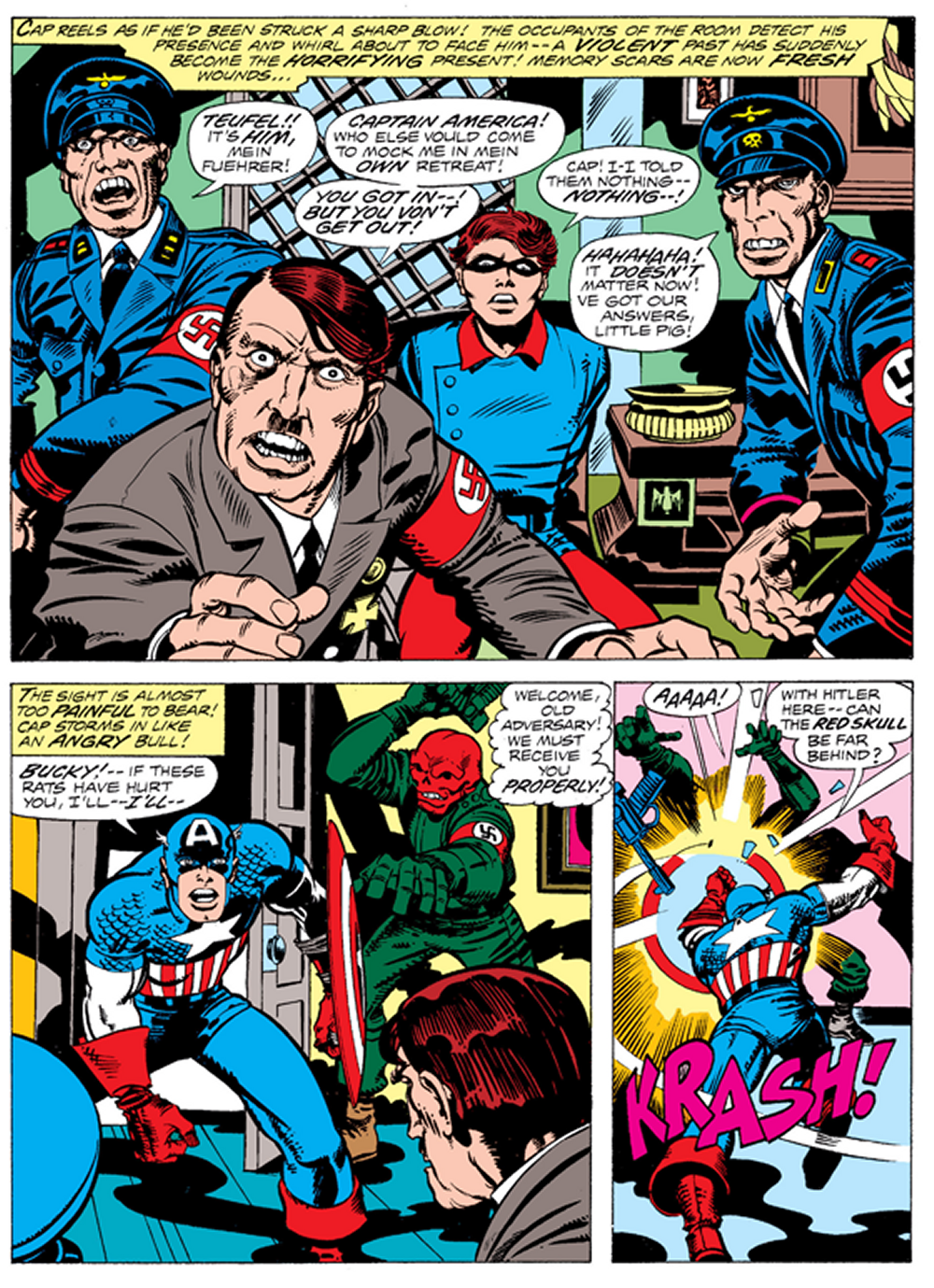 I have to mention the art. Kirby, of course, is a master storyteller and pencil artist, but he was often saddled with mediocre or uninspired inkers. That is not the case here, as this book has Kirby’s oversized art inked by artists who wanted to be involved. The first chapter is inked by Barry Windsor Smith, who had made his name as the first artist on The Conan comic book, but who had gone on to the world of creating fine art prints by the time this book came around. Smith’s inks over Kirby are glorious, and manage to look ultra-contemporary and look like the work of Kirby’s old partner, Joe Simon, at the same time.

Most of the book is inked by Herb Trimpe, who shows his respect for Kirby with solid work that really adds depth to the pages. John Romita Sr., Marvel’s art director at the time, inks one chapter and some additional pin-ups, and brings his usual professionalism to the job.

As a bonus, the book includes a few pages scanned from the original art, with no colors, so we can see just how well Smith and Trimpe worked with Kirby. Another bonus is the 1976 Mighty Marvel Bicentennial Calendar,which has some nice illustrations by Romita, Trimpe, Frank Brunner, Jim Starlin, Frank Robbins, John Buscema and more.

As someone who still has his original copy, this new edition of Captain America’s Bicentennial Battles is still worth owning. The bright paper, superior reproduction and bonus material make it a bargain. It’s not a hardcover, but the covers are sturdy and the binding is vastly improved from the original.  If you haven’t read this story before, it’s well worth adding to your library. The story is great fun, and the appeal is timeless. Plus by showing Captain America as an anti-fascist hero who believes that Black Lives Matter and Native Americans got a raw deal, it puts the lie to this right-wing nonsense that the character has only recently been politicized.

You should be able to order this from any bookseller using the ISBN code. 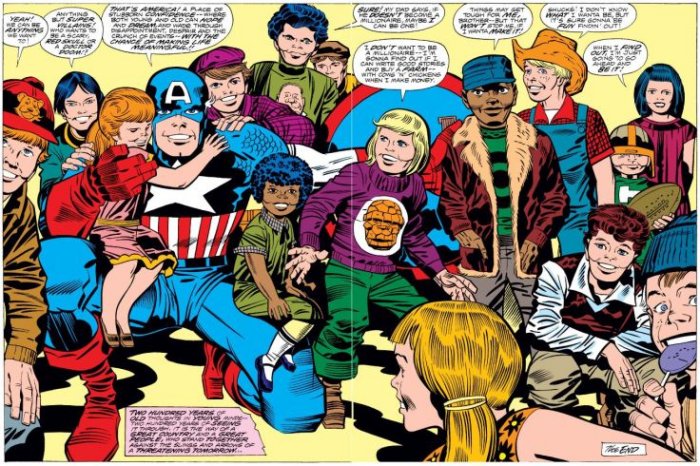