Cheesy Toy Knockoffs Are Back 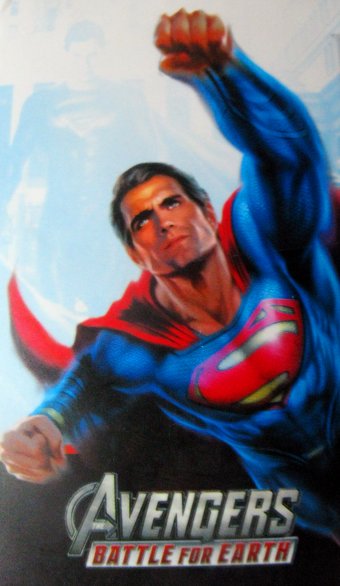 Last week your PopCulteer was in Chicago with his lovely wife, and as many couples do when on vacation, we took a day to visit Chinatown to look for cheesy knockoffs of toys.

Back in the 90s, when I was writing the “Facts on Figures” column for the late, lamented Toy Trader Magazine, I included as a regular feature the “Cheesy Knockoff of The Month.” This was in the early days of the internet, before a couple of hundred other people with the same idea started their own websites devoted to the topic, but I still get a huge kick out of cheesy knockoffs of popular toys, and once in a while I like to revisit my roots here in PopCult.

Last week we uncovered three remarkably cheesy knockoffs, one is a near-rip off of popular superhero toys, while the other two are essentially bootlegs of major properties, done up in a humourous (to me) fashion.

We hit eight or ten gift stores in Chinatown, but found two of these treasures in one, and the videogame-based toys in another.  We didn’t just go to Chinatown for the toys. We also went for the scenery, the atmosphere, the ice cream and the other scads of cool and inexpensive trinketry and jewelry that many of our friends and family will get for Christmas this year. Plus, as we discovered last time, almost every gift store takes their old stock, wraps it in Chinese-language newspapers, and sells it as “mystery boxes” for a buck or five. I’m a sucker for a surprise box, so we loaded up on those.

The cool part was that, as we discovered on our previous trip to Chicago, Chinatown is right on the Red line of the “L.” It was just a short walk from the station to the main drag, where all the cool gift stores are. We were also just a brisk walk from Chess Records and Willie Dixon’s Blues Heaven, but we didn’t go back there this time, because it was very cold, and we were laden with cool, cheap stuff. If you’re headed to Chicago and have some free time, hop on the Red Line and get off at Cermak/Chinatown. There’s great food, shopping, and tons of cool stuff to do, all an easy walk from the station.

But now, we must look at the toys…

Well, everybody knows all about the world-famous “Universal Hero Super Force, don’t they? 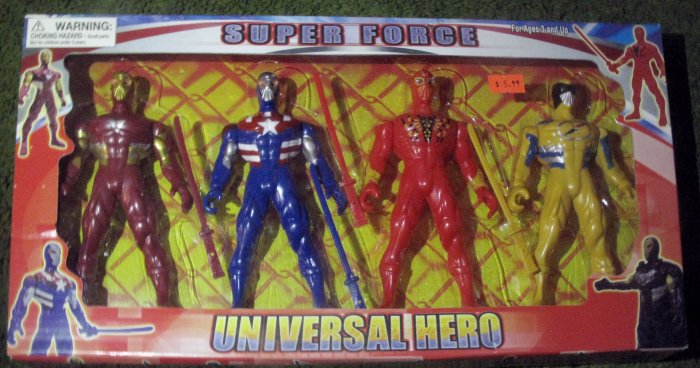 I mean, these guys are so remarkable. Let’s address the technical details, which may not be obvious from this photo. The figures, which stand roughly six inches tall, sport a truly amazing TWO points of articulation! The arms swivel at the shoulders. Even the heads don’t turn on these guys. Made of rigid plastic, each figure comes with a Katana, which they can hold due to a strategically-placed peg in the palm of each hand. The swords have holes in their handles that fit the pegs, so there you go.

These are basically the Ninja figures that you can find at Dollar Tree, with different body colors and paint jobs. As you can probably tell, the designs on them sort of look like (left to right) Iron Man, Captain America, Spider-Man and Wolverine. I did say “sort of.” Every character has a ninja mask molded on, and the designs are not exactly slavishly accurate. At first I thought Spider-Man was Daredevil, but then I noticed that the thing painted on his chest is a spider (with yellow legs).

So the figures are crap of the highest order, but the real entertainment value comes when you flip over the box, and look at the line-up and names on the back. Note that this includes four additional figures that I didn’t see, and probably wouldn’t have picked up if I had, since the four additional figures also sport the same body mold (only three of them have added capes). 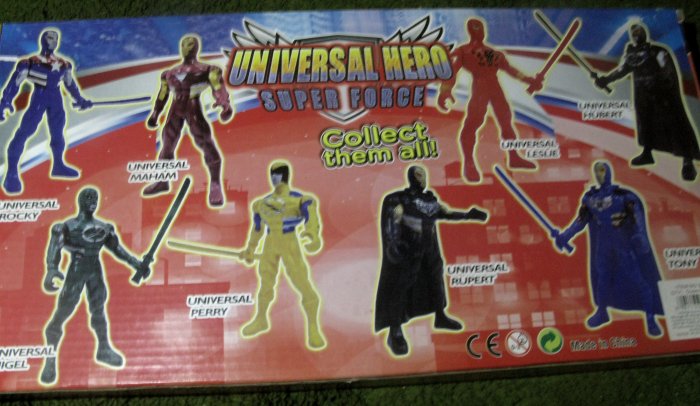 Is that amazing, or what? I mean, such a line-up of iconic heroes with such powerful names! 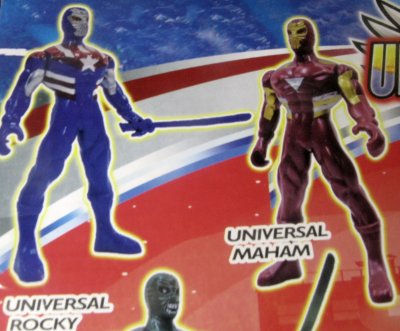 This set includes both “Universal Rocky” and “Universal Maham.” Who could look at that famous red-white-and-blue outfit and not think “Why that must be Universal Rocky?” And of course we have Universal Maham, because that’s such a common name. Actually, these are two of the three names on the box that don’t seem a little anti-masculine.

Note that Universal Maham is not pictured with his Katana sword, but rest assured that he does indeed come with one. I wouldn’t want anyone to feel he’d been cheated of his means of defense.

We’ll have to zoom in for a closer look at the other winners in this collection. 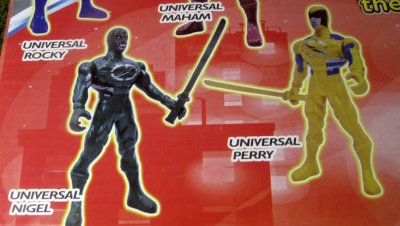 Man, you don’t want to mess with that guy. He’s a bad-ass. Nobody wants to cross Universal Nigel. Man, Nigel will MESS YOU UP!

As bad as Nigel is, stay far away from Universal Perry. he will do a number on you with that yellow sword he has attached to his hand with a peg.

Perry is in this set of figures, but Nigel, whom I’m guessing is a stand-in for Black Panther, is not. Like I said, there must be another set of four figures floating around out there in cheap-toyland. Or maybe there isn’t. Showing figures that were never produced would add to the mystique. 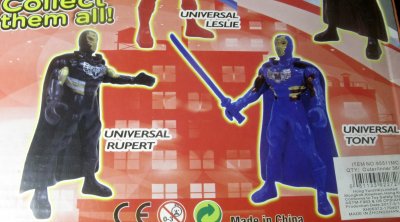 I’m leaving out the close-up of Universal Leslie (the Spider-Manish boy) and Universal Hubert because, with names like those, they were so manly that my photo of that part of the back of the box was too blurry.  It appears that Hubert is supposed to be Batman or Darth Vader or Dr. Doom or something.

Our last two figures are not in the set I picked up, and since three of those figures are shown with capes, they may have simply not made them because the capes cost a few pennies over their budget. Both of them have winged emblems with different symbols in them. Universal Tony has the letter “M,” which leads me to believe that they may have accidentally switched his name with “Universal Maham,” who is painted to look like Tony Stark’s alter ego.

As with Hubert, I have no idea who Rupert and Tony are supposed to be. They may just be generic knockoffs, or videogame characters or something from Anime or God knows what.

So that was fun, finding four cheap ninja figures repainted to somewhat resemble Marvel superheroes, with four additional figures shown on the box that may well not even exist, but from fun, we go to interesting, because when I got the next item, I had no idea what it was…

This caught my eye because the welding helmet looked like it might fit on a 1/6 scale action figure, and the rifle is also the right size, and what the hell is a frying pan doing in there?

Thanks to Eamon Hardiman, I now know that this is an unlicensed toy based on Player Unknown’s Battleground, which was apparently a big deal among videogamers back in 2017. I picked up (and probably paid too much for) this completely unlicensed set for customizing fodder, but left behind an entire box of smaller sets that included a non-gilded welder’s helmet and a sword. My defense on going for this set was that it was the last one, and the golden frying pan cracked me up.

That frying pan has “PUBG” stamped on it, which is the only thing close to an English-language logo anywhere on the front of the package. Since it’s packaged with the logo upside-down, I didn’t even catch that until I looked at the photo as I was writing this.

The real entertainment value of this item is on the back, which was even funnier before I found out about the game… 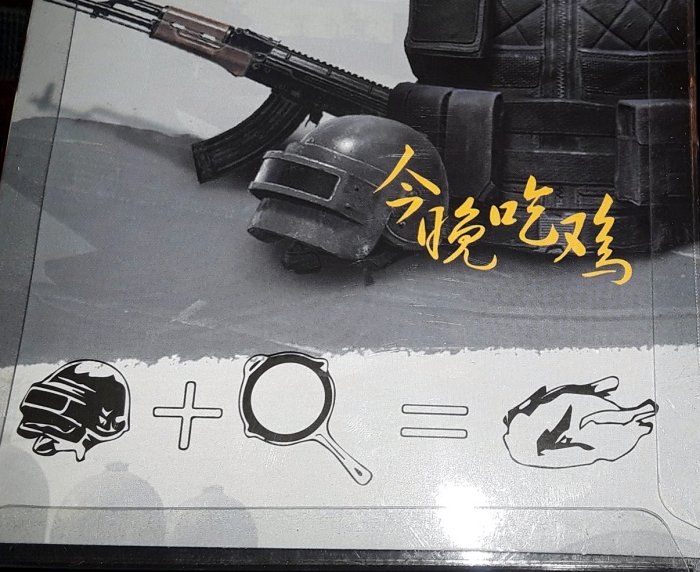 Having no clue about the game, which is apparently a first-person game where you’re dropped on an island and have to gather tools that you use to kill all the other players, I had no idea what the pictograph equation shown above meant. “Welder’s helmet plus frying pan equals chicken” was pretty hilarious to me. I later found out that those two tools are highly valued, and when you win, the game congratulates you with “Winner, winner, chicken dinner.”

I have to admit, I like it better as a non-sequitor.

However, there is more fun on the back of the package… 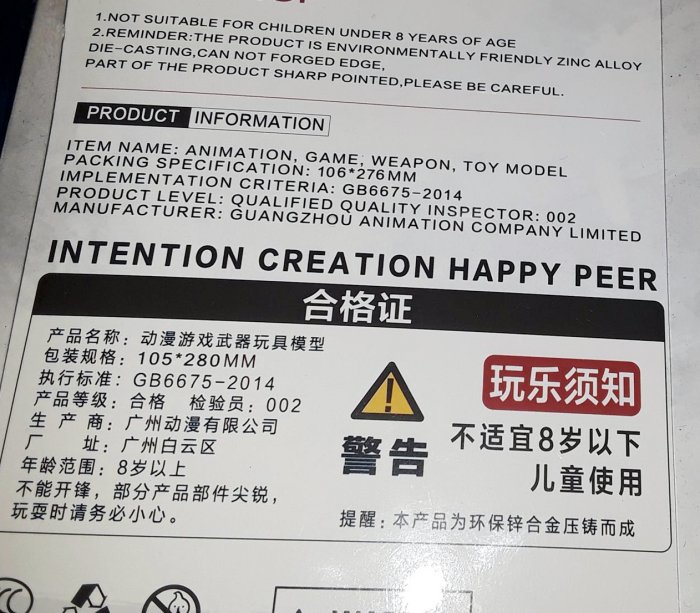 I’m not sure exactly which road is paved with “Intention Creation Happy Peer,” but I take comfort in knowing that it’s out there.

Finally, we have the winner in the “slap as many trademark violations on one toys as is humanly possible” sweepstakes… 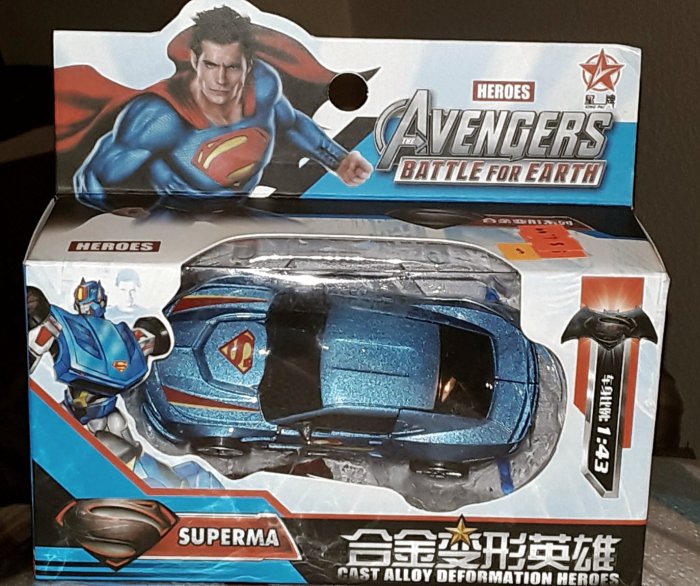 I know what you’re thinking. “What’s so remarkable about Superma’s car from the Cast Alloy Deformation Heroes line?”

I supposed we should start at the top with this, and work our way down. First we have a picture of DC Comics’ Supeman, next to the logo for Marvel’s Avengers: Battle For Earth, a videogame from six years ago. The word “Marvel” is omitted from the “Marvel Heroes” logo, and in case you aren’t a comics person, Superman and The Avengers are not published by the same company. Also, Superman doesn’t really need a car, but I digress.

We continue down the package to find a Transformer, the Superman “S” shield next to “Superma,” and in the upper right of the front panel of the box, the Batman vs. Superman logo. I didn’t open this thing until I was writing this, and discovered that the car does indeed transform–into a robot, not Superman–and comes with a sword and a ray gun to hold in its robot form. When I opened the package, behind the car, I discovered the interesting logo you see below… 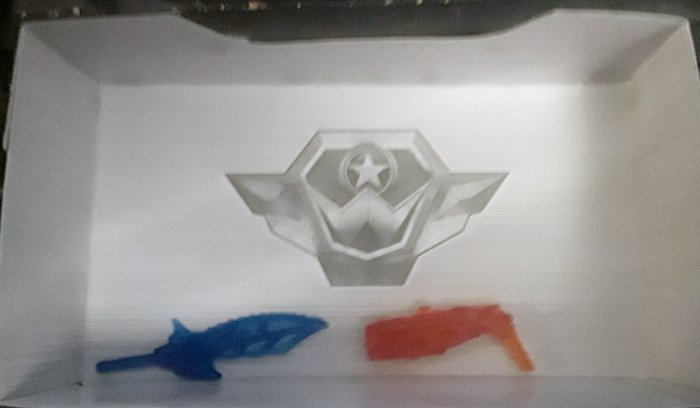 So, we have elements of Captain America and Wonder Woman, set inside sort of smooshed squat Autobot symbol. The hits keep coming!

We’re already beyond a trifecta, and we haven’t looked at the back of the box yet… 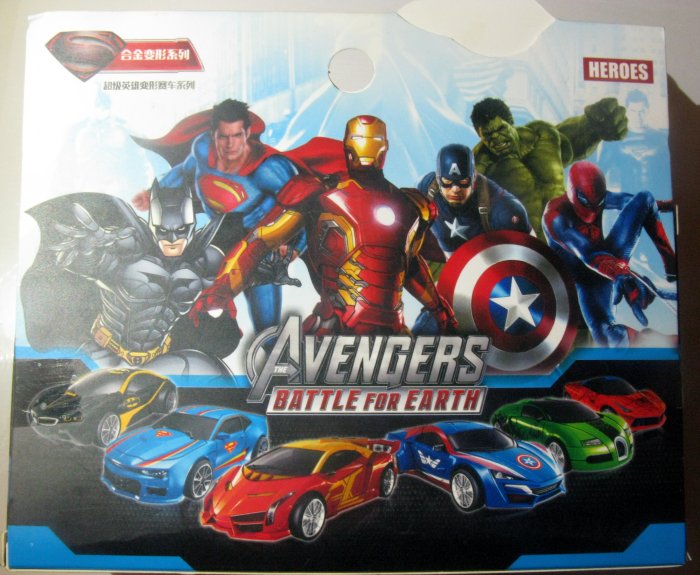 Is that not just beautiful? It’s pure mash-up eye candy. I remember when Batman and Superman joined the Avengers with Iron Man, Captain America, The Hulk and Spider-man, and then they all went out driving like they were The Fast and The Furious. I mean, that happened, right? Then they all transformed and had a giant robot hoedown! I’m pretty sure that happened.

That wraps up this week’s PopCulteer. Come back for our regular features. Sunday will probably include more video of cool stuff from Chicago. As always, we strive to bring you fresh content every day, even if it’s just half-assed.