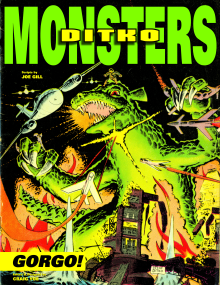 Ditko Monsters: Gorgo! is yet another high quality historical compilation assembled by Craig Yoe and follows up two more academic books about Steve Ditko, released by Yoe Books. Whereas The Art of Ditko (introduction by Stan Lee) and The Creativity of Ditko (introduction by Paul Levitz) were more scholarly career retrospectives, Ditko Monsters: Gorgo!, and the upcoming Ditko Monsters: Konga! collect work that Steve Ditko produced during a very brief period in the early 1960’s for the loveable, low-rent comics publisher Charlton. 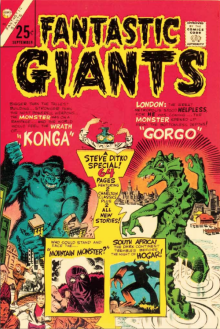 Steve Ditko matters because he is the co-creator of Spider-Man and Doctor Strange and is second only to Jack Kirby in terms of his importance to the success of Marvel Comics. What’s interesting is that while Ditko was at the top of his game producing Spider-Man for Marvel, he was also “slumming” by doing work for Charlton Comics. Charlton was a low-budget comics publisher based in Derby, Connecticut who were notable for doing everything in-house, from the creation of comic books to the printing and even the distribution. They were also notable for reputed mob ties.

Charlton Comics didn’t pay very much, but they offered nearly complete creative freedom, which was very important for the enigmatic Ditko.

Gorgo! was a comic book series based on the 1960 monster movie produced by the King Brothers and released by MGM. Gorgo! was an attempt to cash in on the success of Godzilla but stole part of its story from King Kong and wound up with a pretty funny punchline for an ending. Essentially, Gorgo is a prehistoric monster unleashed by an underwater volcano off of Dublin, who is then captured and brought to London. The monster is put on display by a circus promoter. 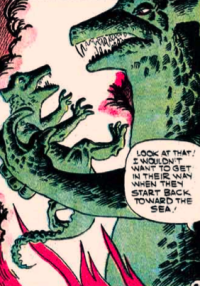 Things go smoothly with the display of the fifty foot beast until his mother shows up. The monsters terrorize London and are then driven back to the sea. The movie is enough of a classic that it earned a spot on Mystery Science Theater 3000. The history of the movie and the comic book is covered in great detail in Craig Yoe’s introduction.

The comic book based on the movie is fascinating, sometimes for reasons that go beyond the quality of the art and stories involved. Writer Joe Gill was basically cranking out material in bulk. He was having fun doing it, as you can obviously tell from the simple charm that his stories possess, but he wasn’t exactly going for high art with this work. Ditko seems to be having a blast working on these stories. It’s  obvious that he was  enjoying his freedom by being more experimental with his art. 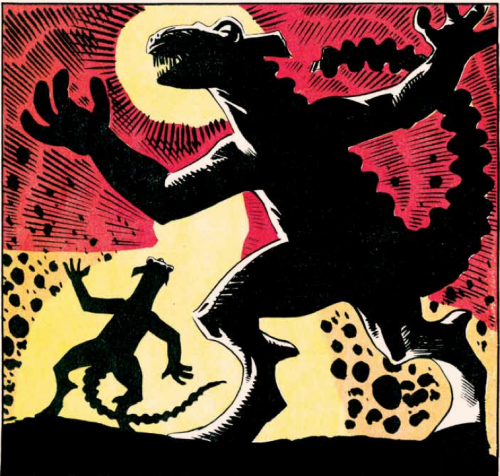 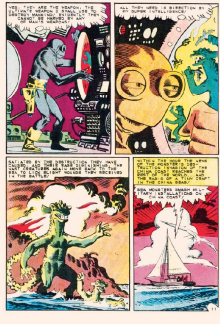 Much of the work in this book does not look like typical Steve Ditko artwork. Some of this might be due to the involvement of his studio mate, Eric Stanton, but some of it seems to be Ditko experimenting with different techniques just for the hell of it. There are pages contained within this volume that look like they were inked by Joe Kubert instead of Steve Ditko. He was obviously trying new methods and exploring new territory as an artist, even though these stories are not the timeless classics that his Marvel Comics work from the same era have turned out to be.

It could be that Ditko felt confined by his success at Marvel and used his work at Charlton as an outlet for his growth as an artist. The problem is his experiments in craft are applied to stories that are cheesy as hell. They’re a lot of fun, but they’re not going to stick with you for a lifetime. 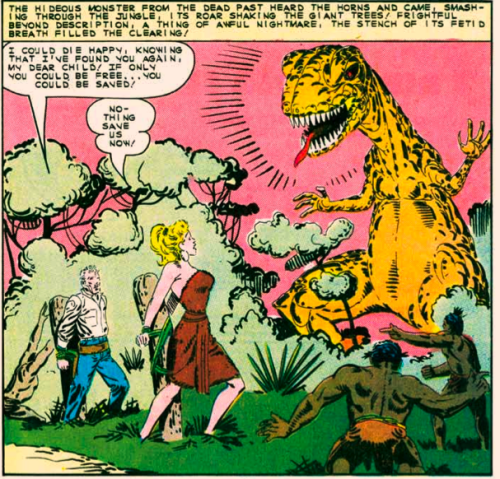 Still, this is a vital volume for any Ditko enthusiast. The artwork contained here is the missing link between Ditko’s work at Marvel and the intricate “wash” artwork that he later produced for Warren Publishing. You can also see some compositional methods developing here that Ditko later used at DC Comics and in his own self-published work with his bizzare Ayn Randian hero, Mr. A. 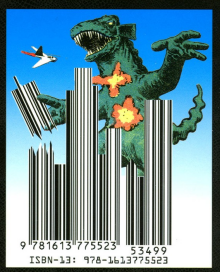 The coolest UPC code in the world!

Since Ditko famously refuses to give interviews or discuss his past work, all we can do is examine his creations and judge them on their own merits. Ditko Monsters: Gorgo! is a beautifully assembled volume, with classy, faux reptile skin textured binding and the coolest UPC code that you will ever see in your lifetime, but the stories within are best examined through the rose colored glasses of someone who loves cheesy monster movies. This book is basically 200 pages of cheesy giant monster adventures, with artwork that serves the stories well, but also shows off one of the true masters of the form during an early experimental period.

Ditko Monsters: Gorgo! is a must-have for any Steve Ditko enthusiast. It’s a complete presentation of his work on the Gorgo! title. The reproduction is stunning, featuring artwork scanned directly from the comic books. Since these are scanned directly from Charlton Comics, that means the artwork is complete with the cheesy X’s and O’s in the color separations that Charlton used when they printed their comics on a converted cereal box press. That’s an extra nostalgic bonus for anybody who grew up trying to figure out why Charlton Comics looked so weird.