Existentialist Hitman of the Future 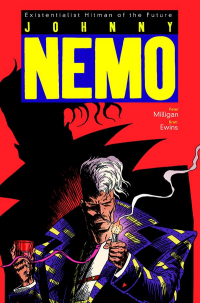 “It wasn’t every day I had a Nun in my office, and I can’t remember the last time one of them exploded.”

Johnny Nemo is not your typical private eye. He operates in “New London” in the year 2921. It’s a crowded, nasty place where, to quote the back cover copy, Johnny has to deal with “Death-Juice junkies, Latin-spouting armored fascists, exploding nuns and a religious cult who worship Bing Crosby’s left testicle. It’s also home to ultra-violent, foul-mouthed private eye Johnny Nemo – a streetwise PI who deals in death… and simple solutions to complex problems!” 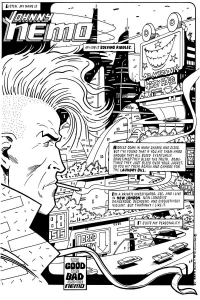 Johnny Nemo stood out because he was like Mickey Spillane’s Mike Hammer, run through a nihlist, post-punk mill and salted with heavy doses of the special kind of cynical pessimism that only grew in the dead soil of 1980s Thatcher-era England.

Cruising around New London in his flying Rolls Royce, Nemo is just as likely to drive through the front door of a hoodlum’s lair as he is to sneak in. This is a guy who interrogates witnesses by throwing them off buildings or taking a flamethrower to them.He kills a lot of folks in the book. A lot. 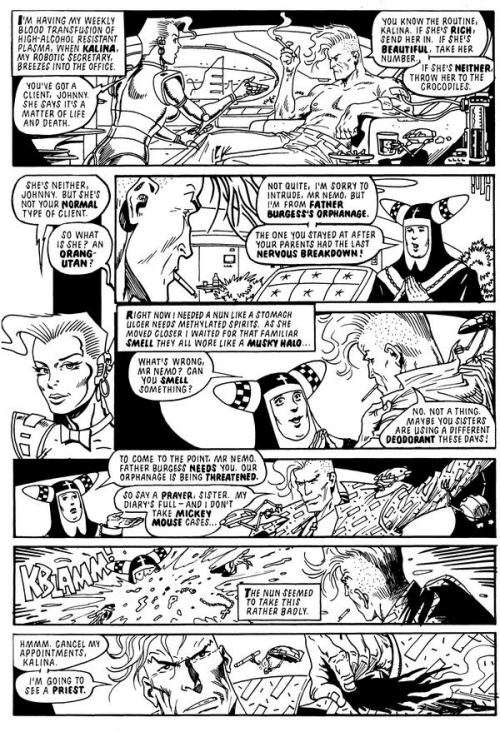 This is brilliant, heavy satire, loaded with lots of violence and a little sex, courtesy of Kalina, Nemo’s robot secretary with benefits. There’s touches of Douglas Adams here, and tons of literary references that demonstrate the true thought that went into this. Milligan’s writing is fun, smart and entertaining. Ewins’ art is perfectly suited for the material, flitting between noir and sci-fi with just the perfect mix. 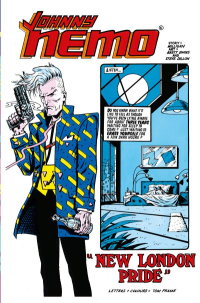 Frank Miller was clearly influenced by Johnny Nemo when he was working on The Dark Knight Returns and later, Sin City. Likewise, Milligan shows off his influences in Johnny Nemo and they congeal into a hilarious, over-the-top parody of the hard-boiled detective genre, with all the trappings of science fiction and punk rock that was all the rage back in the 1980s.

This is a great collection of all the Johnny Nemo stories, some in color and some in black-and-white, and all of them filled with slapstick violence and biting satire. Johnny Nemo’s encounter with Jesus is one for the ages. There’s also some guest artists contributing to the book, including Steve Dillon and Jock.

This is not a book for the squeamish or easily offended, but if you’d made this this deep into the review, you are probably neither. Johnny Nemo: Existentialist Hitman of the Future is a vital addition to the graphic library of any fan of detectives, science fiction or brilliant UK comics from the 1980s. 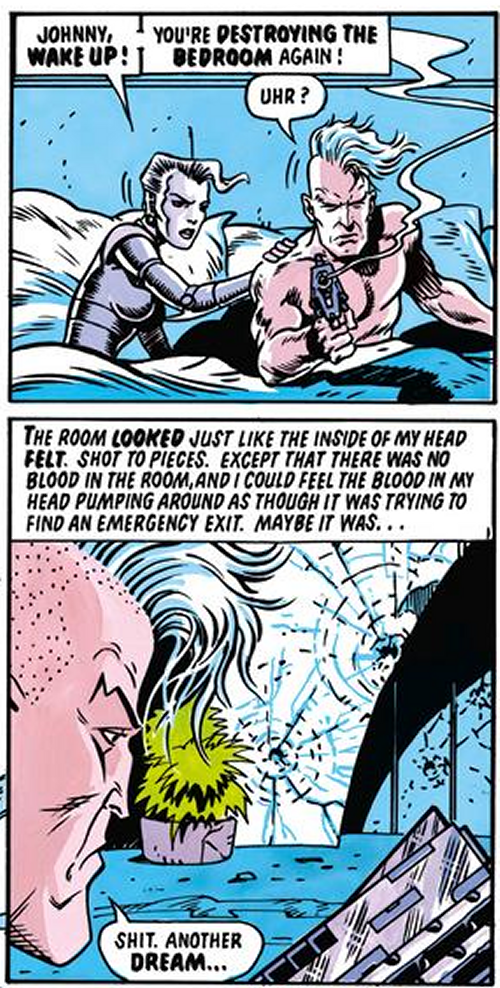