Friday The 13th Stuff To Do 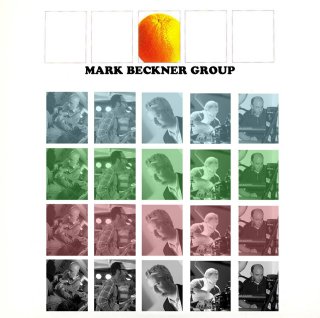 I know that a few weeks ago I said I wouldn’t be doing “Stuff To Do” posts any longer in PopCult, and would instead focus on individual events, because producing those long lists of events tends to chase away readers.

However, there are four cool events happening over the next couple of days, and in the spirit of the unluckiest of days, I will not be able to attend any of them. I am, as the medical terminology says, sicker than hell. It’s not life-threatening or anything, just miserable. I am still struggling with the nasty cold/sinus afflictions that have bedevilled be for the last month or so.

There is a reason that this cold is lingering. It’s been about two years since I was diagnosed with Myasthenia Gravis, an auto-immune disorder that was rendering my muscles too weak to do much. I am very lucky in that I have an extremely mild and specialized form of MG, that has only affected my eyes and fingers, but as an artist and writer, those are still pretty important to me.

I am responding very well to treatment. I’ve regained most of the use of my hands and can paint, draw, sculpt and play guitar badly again. However, there has been a trade-off. The medicines that I’m taking that have greatly improved the quality of my life, have side effects. For one, I’m taking immuno-suppressants to weaken my over-active immune system and keep it from attacking my body. Unfortunately, that leaves me a little less prepared for things like colds and other minor ailments.

The meds also have taken away my former super-human ability to stay awake and alert for 30 hours at a time. Now that I am taking fifteen pills a day, I tend to be in bed and approaching sleep by the time 11 PM rolls around. Sadly, in Charleston that’s when most bands go on. I can take naps to adjust for events like that, but doing so disrupts my sleep-cycle for days afterward.

I was pefectly willing to do that this weekend, but this nagging cold has my ribcage feeling like a crushed beer can, and I’m just not up to heading out for entertainment. Plus, even if I’m not contagious, I sure as hell sound like I am. At the moment the most entertainment I can handle is the aerial ballet of a stray plastic bag caught in the wind, which distracted me from writing most of the day yesterday when I was zonked out on cold meds. Actually going out is just not going to happen.

And that sucks because some of my oldest friends and favorite people are putting on killer events this weekend.

Mark Beckner Group with Speedsuit At The Blue Parrot

At the head of this post you see the graphic (and I’m assuming debut album cover design) for Mark Beckner Group. Mark has been a friend since the Charleston Playhouse days of the original Radio Free Charleston, and has been a fixture on all incarnations of the show with his bands Go Van Gogh, The Tunesmiths, Hitchcock Circus and The Nanker Phelge.

Friday night The Mark Beckner Group is playing at The Blue Parrot for a mere five bucks. The show kicks off at 10 PM with Speedsuit opening. Speedsuit is the latest band featuring Mark’s brother, Stephen Beckner, who was his bandmate in Go Van Gogh, Hitchcock Circus and The Nanker Phelge. I personally rank both Beckners among the finest songwriters in the state.

I had originally planned to record some of this show for the next video episode of Radio Free Charleston, but the fates have intervened. So you should head out and see the band, and tune in to Radio Free Charleston next Tuesday on The AIR, where I will play studio cuts from both bands.

IWA East Coast teams up with Real Shoot Wrestling for a special show Friday Night in Kanawha City at Quantom Sports. All our favorites will be there, including Mad Man Pondo, Juggulator, Mickie Knuckles, Carter LeSic, Chance Prophet and more. I’d be there if I could, but my plans to take in a couple of hours of wrestling before heading over the Blue Parrot have been laid waste by the crud.

Check out this graphic for all the details. 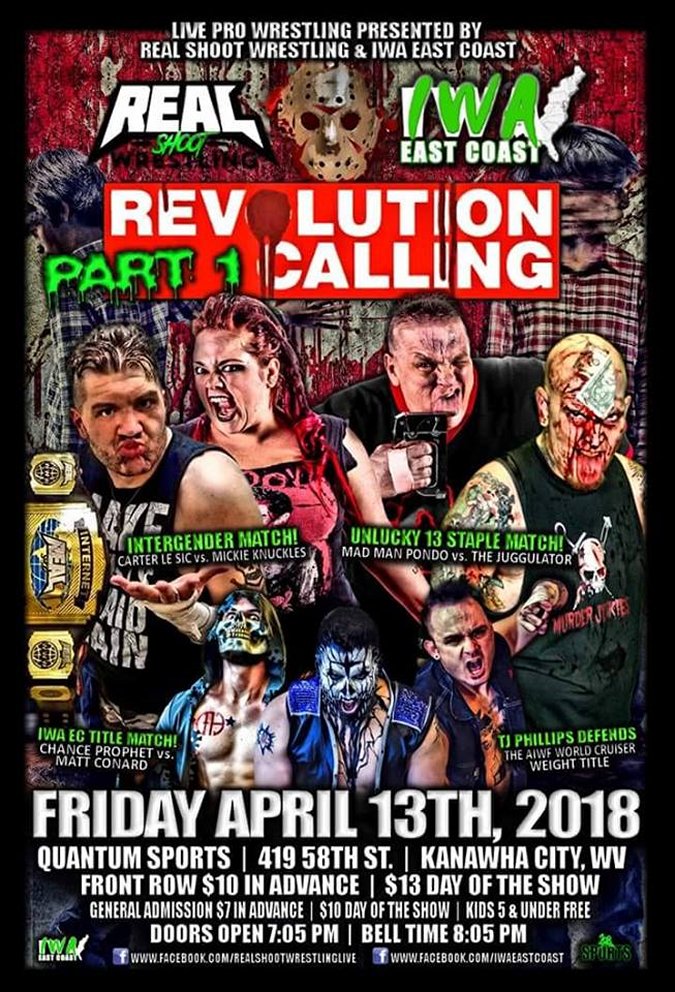 The first of two great all-ages shows kicks off Saturday afternoon at The Barge. The Rockin’ The River Concert Series kicks off this year with Dangermuffin, Qiet, The Spanglers, and Poor Taters! It all starts Saturday, April 14 for a day long event filled with great tunes, cold drinks, delicious food, and a whole lot of sunshine.

In addition to the music, they’re also featuring local WV arts and apparel vendors, games, and teaming up with local breweries and distilleries. Presale Tickets are $10/Day of Show $15. All Ages Allowed. Rain or Shine Event. 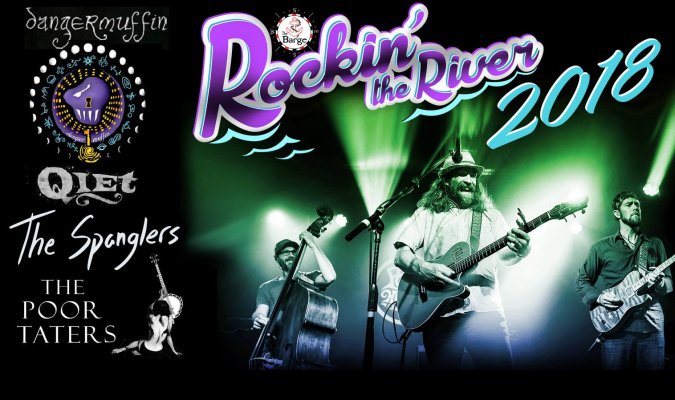 The Jasons At The Bakery

If Horror Punk and more is where your tastes lay, then you’ll want to go to The Bakery, where the doors open at 6 PM for a show featuring The Jasons with The Fabulous Brothers Steele and One In The Chamber. This all-ages show costs five bucks at the door, and celebrates the Jasons’ new album, “The Jasons Get Sued,” which is released on Friday the 13th, appropriately enough. 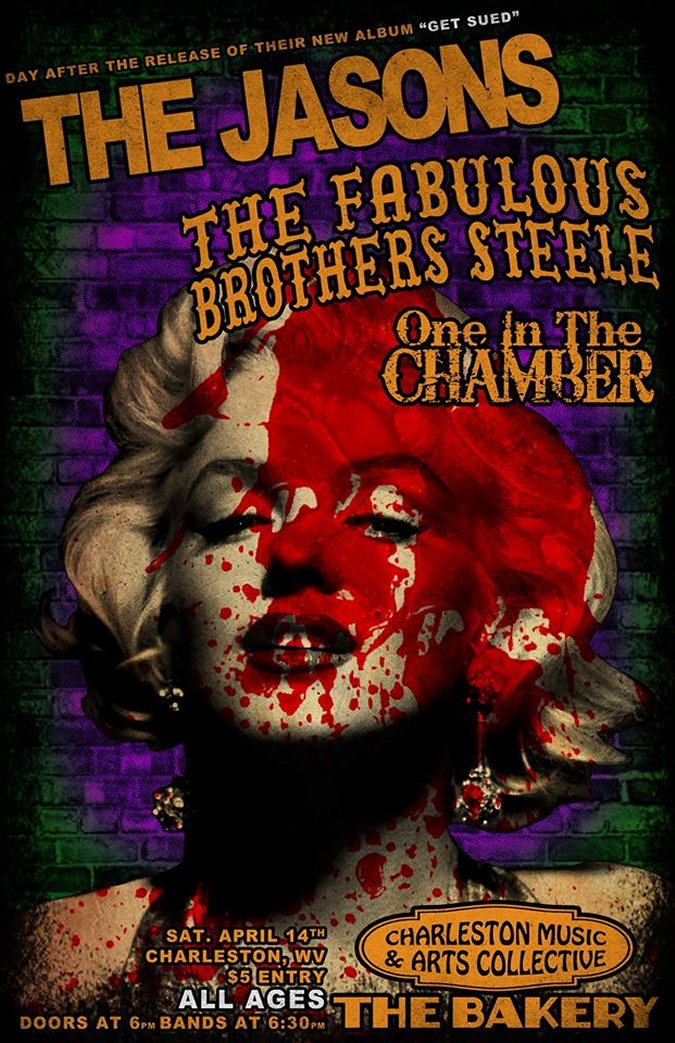 And that is this week’s PopCulteer. Yours truly will be taking it easy over the weekend, but we’ll still have fresh posts for you, so keep checking back.