Get Back To The Little Shop Wednesday On The AIR 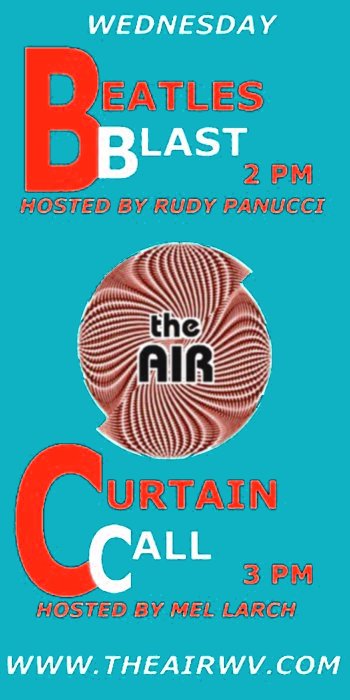 Wednesday afternoon The AIR brings you brand-new episodes of Beatles Blast and Curtain Call!  You can tune in at the website, or if you’re on a laptop or desktop, you could just stay on this page, and  listen to the convenient embedded radio player lurking over in the right-hand column of this blog.

At 2 PM,  it’s time to Get Back on Beatles Blast. Specifically, we’re going to bring you the Glyn Johns version of the Get Back album, which was rejected by The Beatles and Apple, and was then sacrificed at the altar of the Wall of Sound and became the Let It Be album. However, Johns’ version of the album has been widely bootlegged, and it’s great to finally have an official release as part of the brand-new Let It Be Super Deluxe boxed set.  This version of the album compares very favorably to what was eventually released.

And of course, that boxed set has been released to prime the Beatle pump for the premiere of Peter Jackson’s three-part, six-hour Get Back film, which debuts next month on Disney +. That film has been re-edited out of the sixty or so hours of footage leftover from the original Let It Be movie, which has been heavily criticized for showing the worst aspects of the strained filming process while ignoring the joy and fun the band had while working on the project.

In this hour I bring you the entire Glyn Johns version of the Get Back album, along with an extra track mixed by Johns, as well as some other previously-unrleased gems from the Let It Be boxed set. It’s a crisp, clear look at one of the Beatles more controversial works.

Beatles Blast can be heard every Wednesday at 2 PM, with replays Thursday at 10 PM, Friday at 1 PM,  and Saturday afternoon.

At 3 PM on Curtain Call, Mel Larch jumps the gun a little bit on Halloween and presents highlights of the new 2021 Off-Broadway Revival Cast Recording of Little Shop of Horrors. This show is very special to Mel, since she played Audrey in a production in Charleston back in the 1980s, and it remains one of her favorite theatrical experiences. In this recording you’ll hear Jonathan Groff as Seymour and Tammy Blanchard as Audrey, in a fresh, new recording, produced by Alan Menken, the show’s co-creator.