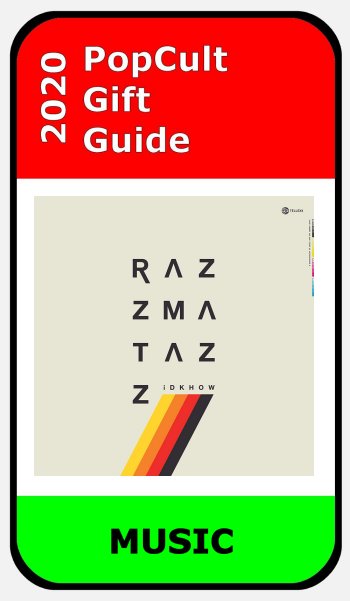 I DONT KNOW HOW BUT THEY FOUND ME, or iDKHOW is a new project led by Dallon Weekes (Panic! At The Disco). Earning press acclaim, their debut EP hit #1 on Billboard’s Top Heatseekers Chart and was recommended last year in The PopCult Gift Guide.

IDKHOW initially had a curated storyline, believed to have been a decades-old band that never got a big break until 2017, when an anonymous donor released recovered video footage that hints otherwise, leading fans, music historians and conspiracy theorists to debate.

There debut full-length album, RAZZMATAZZ, is available on vinyl or CD from the band’s website, and you can find a load of related apparel there, too.

The music is pure New Wave retro bliss. I have been known to dub this style of music “blippy, farty music,” but that doesn’t mean that it isn’t near and dear to my heart. Highly recommended for fans of New Wave Music, or just clever, intelligent and catchy post-punk pop-rock.