Jeryl Prescott and Adam Minarovich from The Walking Dead 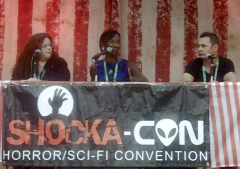 Jeryl Prescott and Adam Minarovhich, who both were cast members of the first season of The Walking Dead appear at ShockaCon 2015 and take questions from the audience and moderator, Melanie Larch.

The two discuss their early exit from the show, what it was like working with the Walking Dead crew, and what they’ve done since.

PopCult will present more video of ShockaCon 2015 all weekend long. You can see the Costume Parade HERE and Hurl Brickbats on the RFC MINI SHOW HERE.The Q&A with Ari Lehman is HERE.