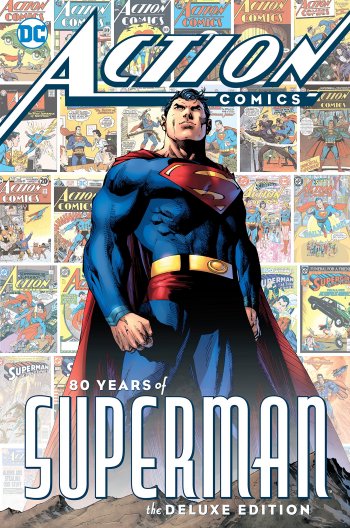 Action Comics: 80 Years of Superman Deluxe Edition has had a bit of an interesting path to publication. It was originally announced as “Action Comics 1000,” meant to be released at the same time as the one-thousandth issue of Action Comics, and part of a huge celebration of Superman’s 80th birthday.

The original plan was to release it with a poster featuring all 1000 covers of Action comics. Somewhere along the way the price was raised to fify bucks, retailers rebelled, so the price was lowered back to $29.99, but the poster was eliminated and will now be sold separately, and the name of the book was changed because this book was not actually going to include the real Action Comics #1000, and it was confusing enough already.

As it stands we have an almost 400-page tribute to the history of The Man of Steel, with a collection of very well-done essays by the likes of Paul Levitz, Jules Fieffer, Joan Siegel Larson, Marv Wolfman and others. We also have a good collection of stories from Action Comics. It’s a decent tribute to eight decades of Superman. However, there are some choices I wouldn’t have made, some glaring omissions and an editorial change that should have been made when they changed the name of the book.

As this was originally intended to be a tribute to Action Comics, the inclusion of non-Superman stories made sense. However, with the change of title, the thirty pages devoted to Zatara the Magician, Vigilante and The Human Target might have been better off being dedicated to stories drawn by the classic Superman art team of Curt Swan and Murphy Anderson. Likewise, while “A Hero’s Journey,” from 2003’s Action Comics 800 was a really nice annivesary celebration, including it here it eats up 57 story pages that could have been used to showcase other, shorter classic stories.

With twenty-one stories spread over 80 years, it’s a bit jarring when you find gaps of 12, 13 and 14 years between Superman stories. There are only two stories drawn by Curt Swan, who worked on Superman from the late 1940s into the 1990s and is considered by many to be the definitive Superman artist. One of those is hampered by a less-than-inspired inking job.

Entire eras of Action Comics are left out. We only get one of the stories Otto Binder wrote for Mort Weisinger, and the Murray Boltinoff editorship is skipped completely. Even the fifteen-year editorship of Julius Schwartz is limited to a mere two stories.

This book also manages to completely skip over the experiment where Action Comics was published weekly for nearly a year. Not only was this an attempt to recreate the feel of a Golden Age Anthology comic, it also included some terrific non-Superman stories and it’s also the reason that Action Comics hit number 1000 about three years ahead of schedule. And I have to question the choice of DC co-publisher Jim Lee as the cover artist. For a book as monumental as this, they really should have gone with an artist more associated with Action Comics, or simply of a higher profile. Neal Adams, Jose Luis Garcia-Lopez, Alex Ross, Brian Bolland and Dave Gibbons are all available, and would have produced a more definitive Man of Steel than Lee’s drawing turned out to be.

There are two absolute gems in this collection. The first is never-before-published Superman story wrtten and drawn in 1945 by Superman’s creators, Jerry Siegel and Joe Shuster. An accompnaying essay by Marv Wolfman tells how he managed to rescue this story from being destroyed back in the 1960s, when he was a kid visiting the offices of DC Comics. My only gripe about this story is that they didn’t bother coloring it. It would’ve been interesting to see what it would look like colored using today’s technology on this nice paper stock.

The other gem is a brand-new story by Paul Levitz and Neal Adams, which I believe may have been intended for a DC holiday special a few months go. For whatever reason, it makes its debut in this collection and is a fitting end to a tribute to eight decades of Superman.

Aside from my minor quibbles, Action Comics: 80 Years of Superman Deluxe Edition is a decent celebration of Superman in Action Comics. It could easily have been double the size and triple the price, but given the scope of Superman’s history and the desire to keep this book under thirty bucks, they did a pretty good job. Available from bookstores and some comic book shops, plus online retailers.