Radio Free Charleston 176 is our 2012 Christmas Special. Filmed at and named after the Marx Toy Museum, this show features music from the Charleston Gay Mens Chorale, a duet from Lee Harrah and Pepper Fandango, a special “double trio” from the cast of “MARY: A Rock Opera,” and Prank Monkey. Also in this episode, we have the Ghost of Animation Past, a holiday message from Razor Sharp Studios and Burt Flemming, and a quick musical tour of The Marx Toy Museum in Moundsville, WV.

The host segments for this episode were recorded at The Marx Toy Museum in Moundsville, WV which is one of the coolest places on earth, celebrating the legacy of Louis Marx and what was at one point, the largest toy company in the world.We took a day trip to Moundsville for what was one of the most fun host segment shoots we’ve ever done. Many thanks to Francis Turner and Kandi Fanton and The Marx Toy Museum for making us feel welcome. The museum is open Tuesday through Saturday until December 29, when they close until Spring. It would be a great, fun trip to close out the year. 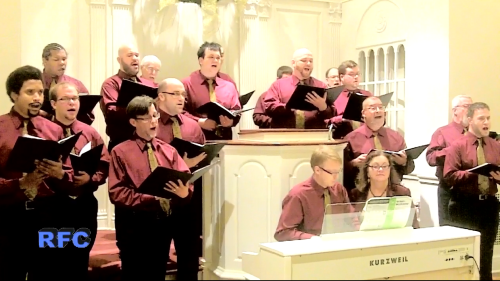 Our first musical number sees the RFC debut of the Charleston Gay Mens Chorale, an eighteen voice powerhouse that sounds like a well oiled machine even though they’ve only been together less than a year. We were invited in to record “Have Yourself A Merry Little Christmas” at a rehearsal for their big holiday concert which took place December 15th. The featured soloist was Brian DeWeese. You can follow the Charleston Gay Mens Chorale on Facebook and watch for a return appearance on RFC sometime next year. 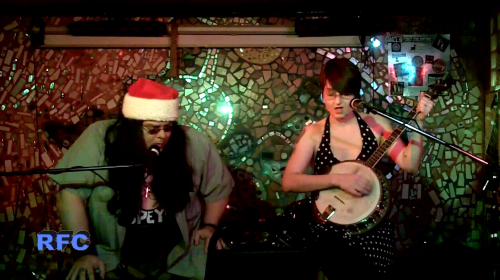 A normal person wouldn’t think to pair up local metal legend Lee Harrah with Charleston’s “angry chick with a banjo,” Pepper Fandango. But I never said I was normal. I came up with the idea of recording a duet between the two on the song “Baby, It’s Cold Outside,” and remarkably enough, they both went along with it. We settled in on a Tuesday night at The Empty Glass, where Lee and Pepper rehearsed for about half an hour before we recorded the song. We think you’ll be surprised at the way these two professional entertainers knocked it out of the park. Special thanks to BJ Korodi and Andrea Anderson for the major audio assist.

You’ll see brief snippets of snow footage during this song. This video was recorded at Snowshoe Mountain Resort last Thursday night, which makes it the last thing recorded for the show. While months of planning went into this year’s Christmas episode of RFC, the host segments and the first two musical numbers were all recorded within the last nine days..as scheduled. It’s wonderful when a plan comes together.

Our animation this episode is actually a re-presentation of the animation from our very first Christmas episode, “Pentagram Flowerbox’s Christmas Special.” Many of you may remember Pentagram Flowerbox from the early episodes of Radio Free Charleston, and you may remember the nasty split which resulted in Pentagram Flowerbox being excised from early episodes of Radio Free Charleston. On his deathbed, the creator of Pentagram Flowerbox, the late Third Mind Incarnation, decided to patch things up and gave me permission to restore the early shows and use anything else he created before his passing. So we decided to bring you a little more of this 2006 holiday cartoon than we’d used originally. With any luck, 2013 will see the early editions of RFC fully-restored and remastered. 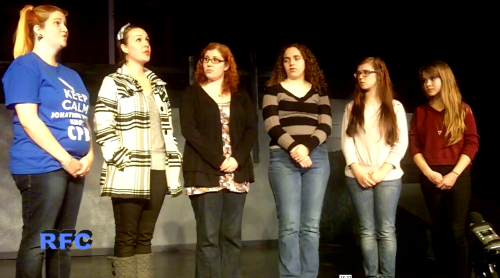 “MARY: A Rock Opera,” is a Charleston tradition and we’ve been bringing you clips of the show for the past five years. This year, with the show running dual casts, we thought it would be a novel idea to present The Trio (Lord Of Mercy) with six voices from both casts united. Many thanks to Dan Khede and Mark Scarpelli for humoring us and to Lo Mallory, Susanna Tucker, Maddy Gourevitch, Susanna Morris, Katie Shaver, and Rowan Maher for doing such an incredible job on such short notice. 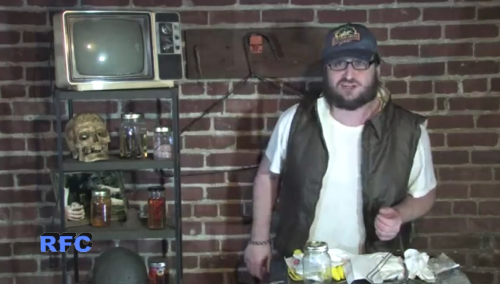 Thanks to Eamon Hardiman and Razor Sharp Studios, the folks behind the “Porkchops” trilogy and “Zombie Babies,” we have a special Christmas message from none other than Burt Fleming, filmed especially for Radio Free Charleston on the set of “Zombie Babies 2.” This is a momentous occasion and we know you’ll enjoy it. Special thanks also to Burt Flemming’s personal assistant, Brian Gunnoe. 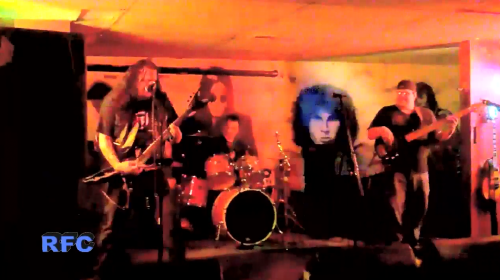 We wrap the show up with last year’s PopCult Christmas Treat, Prank Monkey (Johnny Compton, Jamie Skeen, and Mike Vandergriff) taking on Alvin’s classic, “The Chipmunk Song,” live at The Blue Parrot. This is a timeless musical pairing the likes of which has not been seen since David Bowie teamed up with Bing Crosby.

With this show, Radio Free Charleston wraps up another year. We would like to announce that our annual January hiatus will probably be postponed this year because we’re already hard at work on RFC 177 and 178. Merry Christmas and Happy New Year!