Yes We Can Stop Annoying Commercials.

The credit card reform bill that flew through Congress and was signed into law recently by President Obama will not only put a stop to many unfair practices by credit card companies (albeit, only after they have a year to really stick it to consumers good), but it will achieve something that may well earn Obama a spot on Mount Rushmore. This new law will effectively kill FreeCreditReport.com, and stop those catchy, but totally misleading commercials. I’m talking about the spots with the hapless guy and his two buddies who sing little ditties that blame their lack of free credit reports for all of the hideous mistakes that they’ve made in their pointless slacker lives.

This is a refreshing departure from the previous administrations policy towards business, which was that any business found doing harm to the public must never be punished in any manner that might act as a deterrent. Under the Bush administration, the FTC repeatedly fined the folks behind freecreditreport.com for false and misleading advertising, but the fines were so minuscule that they only “amounted to mere wrist-slaps” and were considered a cost of doing “business” according to a recent Huffington Post article.

In an email to the Post, U.S. Public Interest Research Group’s Ed Mierzwinski wrote, “For too long, FreeCreditReport.com has taken advantage of a weak consent decree negotiated by the Bush FTC that has let it confuse consumers into buying its over-priced, unneeded subscription credit monitoring product that isn’t free,Consumers have wasted millions buying a service that doesn’t prevent identity theft and doesn’t raise your credit score, sold by one of the companies whose sloppy practices make identity theft easy and keeping your credit score accurate hard.”

More importantly, it will get those damned commercials off the air. Unfortunately, almost every law, no matter how good the intentions, has something wrong with it. In the case of the credit reform law that President Obama rushed through, the catch is that these laws don’t take effect for a year. That means that the FreeCreditReport.com folks have a year to come up with a new way to rip off the public. Worse yet, the credit card companies have a year to jack up your interest rates and fees and generally screw over consumers before the new law kicks in. If you have a lot of credit card debt, you can expect the fiscal equivalent of an anal rape sooner than later.

But at least we’ll be rid of those damnable jingles next year. It should make it more pleasant as we gather ’round the communal television in the poor house. Let’s hope that the evil bastards behind FreeCreditReport.com don’t try to sell the concept of the singing doofus to another advertiser, like they did with the Pets.com sock puppet, who managed to survive the demise of that company. Click the images for links to more articles about Freecreditreport.com.

Jenna Brooke Smith’s “Viva le Vaudeville takes place Saturday from 7 PM to 9 PM at The La Belle Theater in South Charleston This first edition of what I hope will be a long-running series of variety shows will feature among its fourteen acts geriatric tap dancers, martial artists, contemporary dance, belly dance, Moulin Rouge inspired dance, and jazz dance. Jenna herself will do some yoga/semi-contortionist and fire-handling shtick for the show. Go read six questions with Jenna here, and check out the promo clip below.

Archie McPhee, the source of way too many of the gifts I give at Christmastime, has a new line of fake gift boxes, so you can freak out your gift recipients by making them think you’re giving them something gigantically moronic.

You can choose among gift boxes for the BACON TUXEDO, the GRAVY FOUNTAIN, a BOX FULL OF HOPE, or the MUSICAL TIE OF THE MONTH CLUB. You can check out the frivolity here, and read the Archie McPhee blog here.

Famed comic book writer Len Wein, co-creator of Swamp Thing and The New X Men, among dozens of other great comic books, recently lost his house in a fire. Wein and his family are okay, and his insurance will cover the cost of his house and furnishings, but Mark Evanier has set up a website that seeks donations to help Len rebuild his comic book collection. Click on the banner below for full details. 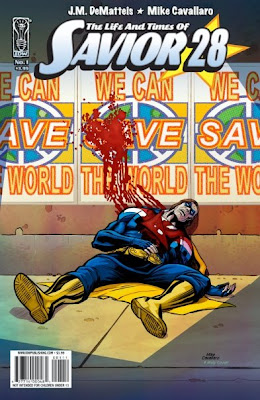 Comic Book Of The Week

“The Life And Times Of Savior 28” by J.M. Dematteis and Mark Cavallaro doesn’t start like most superhero comics. The story begins in 2003 when the lead character is assassinated, presumably at the behest of Vice President Dick Cheney. Savior 28 takes the story of a Captain America-styled government sponsored superhero and turns it inside out, examining it through a unique perspective–that of a survivor’s guilt.

The basic story is told by Dennis McNulty, an old man looking back on the life of James Smith, who was transformed into Savior 28 by a mystical stone implanted in his chest. He’s called “Savior 28” because the process failed with the previous 27 candidates, killing 26, and driving one of them insane–with super powers.

As the story unfolds (I’ve read the first two issues so far) it’s clear that the burden of being Savior 28 weighed heavily on James Smith. He suffered breakdowns and battled alcoholism over the years. Since the mystical stone that gives him his powers also slows his aging process, he can only watch, powerless, as Samantha Shane, his one true love, slips into Alzheimer’s Disease.

A key moment in the story occurs in September 2001, when Savior 13, the crazed, failed experiment, and Savior 28’s greatest enemy, dies. One week later Samantha passes away. After being sober for eight years, Savior 28 goes on a three day bender, only to wake upon the morning of September 11. He becomes a pacifist and starts speaking out against war and violence.
It’s a great post-Watchmen superhero potboiler, with plenty of cynicism and sly humor tossed in for good measure. It’s also not one for the kiddies, with adult language and heavy concepts.

The art, by Mark Cavallaro, serves the story very well, with dynamic layouts and strong rendering. The book is written by J.M. Dematteis, who’s been a favorite of mine for over thirty years. Among his other credits are cult favorites like “Greenberg The Vampire,” “Moonshadow,” and “Seekers Into The Mystery.” He’s also written some of the top mainstream comics for DC and Marvel, such as “Spider-man,” “The Justice League,” “Superman,” “Batman,” and “Wonder Woman,” among many others. Saviro 28 sees him at the top of his game.

“The Life And Times Of Savior 28” is a six-issue series, currently being published by IDW Publishing.

West Virginia Words and Music wraps up Tonight and Saturday at The Clay Center. CYAC’s ” Cupid Rising” finishes its run this weekend at The WVSU Capitol Center Theater. You can read about them in last week’s PopCulteer.

If you’ve been watching Radio Free Charleston this month, then you should know that Hitchcock Circus is playing at LiveMix Studio Saturday night, starting at 8 PM. Five bucks gets you in the door and a free copy of their CD, which is pretty gosh-damned good.
Leon Redbone is in Hamlin Sunday at Lincoln County High School’s Performing Arts Center. Tickets are $30. I just found out and have no further details, so go check it out here.

For the most-detailed weekend wrap-up, check The Gatecrasher blog here at the Gazz.com and visit WV Rockscene for even more on the local music scene.

Next week in PopCult we have our usual “Sunday Evening Videos” and “Monday Morning Art.” Radio Free Charleston is taking the week off, gearing up for the “Drive To 75,” our third-anniversay show on July 1. With a week off to screw around with stuff, you never know what’ll turn up here in PopCult.