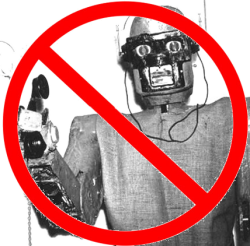 This week, your PopCulteer brings you a suggestion for a law what there oughta be, Face Off photos,a rundown of several really cool weekend events which all appear to be happening simultaneously, and part one of a photo essay on what I did on my Winter vacation.

This week, the FCC announced that they were tightening the rules on robo-calls.  It seems everyone is getting those damned annoying recorded messages about lowering your interest rates or selling you a security system or some other scam.  These calls are a major nuisance, being made by people who obviously don’t care one whit about the Do Not Call List.  In fact, the theory is that the only reason these calls are even being made is to send referral calls to poor saps who have been stupid enough to pay money for “work at home” kits that basically include a Magic Jack and a guarantee of a steady stream of incoming potential sales calls. I have stopped feeling sorry for the poor idiots who have been foolish enough to waste money on such an obviously crooked endeavor.  In fact, I am happy to report that the air horns they sell now at Dollar Tree are strikingly loud and quite effective.

However, no matter how many eardrums I destroy, it doesn’t change the fact that my damn phone rang right when “Adventure Time” was coming on and I had to waste a few minutes listening to the message just so I could get the chance to inflict some physical pain on the operator.

The new FCC regulations don’t go far enough.  They still don’t block political calls or unsolicited calls from charities or criminals posing as charities, so I have a modest proposal.

The technology exists for us to have *69, a feature where you can punch *69 on your phone and find out what number just called you.  My proposal is this…*86.  This feature would permanently block the most recent call you received from ever calling you again.  If you get an annoying robo-call, you just hang up immediately and *86 it, and at the very least, they’ll have to go to the expense of setting up a new number from which to call you.  The offending callers, if they be real, would hear a recorded message: “This person has  chosen not to accept calls from you.”

Likewise, let’s say a certain unnamed Congresswoman/daughter of a former Governor keeps calling you with campaign robo-calls, you would have the option of blocking them permanently.

Is there a church you don’t go to that keeps pestering you with recorded messages trying to save your soul?  *86 their butts back to Hell!

You can even use this function to block calls from exes, stalkers, bill collectors, and people pretending to be from a State Troopers association.

The phone company could even charge per use.  Seventy-five cents for the pleasure of permanently blocking calls from certain Democrat-in-name-only senators?  That’s a bargain at any price!  Sure, it might raise my phone bill $75 a month blocking so many people, but it would be more satisfying than meekly complaining and, eventually, it would be more effective.

Hell, make it even more satisfying.  Instead of charging the person who does the blocking, charge seventy-five cents to the S.O.B. who hooked up the robo-caller in the first place!

Of course, this is a pipe dream.  The phone company could never provide a service that would be so deeply appreciated by all of its customers.  But it’s fun to dream and dream I shall, even if those dreams are occasionally pierced by the sound of an air horn.

As many of you know, Charleston’s own Rob “RJ” Haddy is a contestent on SyFy’s effects make-up competition, Face Off. Every Wednesday you can find Rob at The Vandalia Lounge where he watches the show and does a live blogcast. Last night we stopped by. 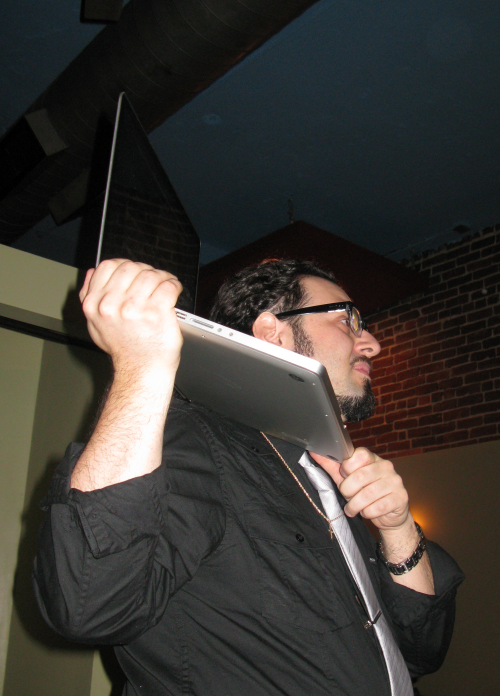 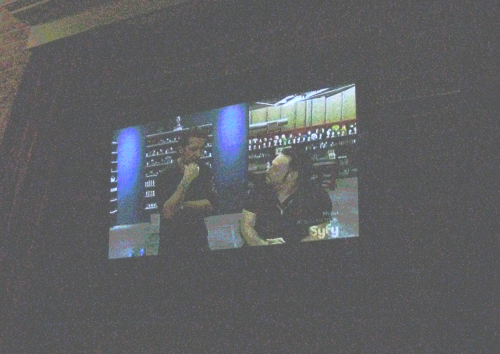 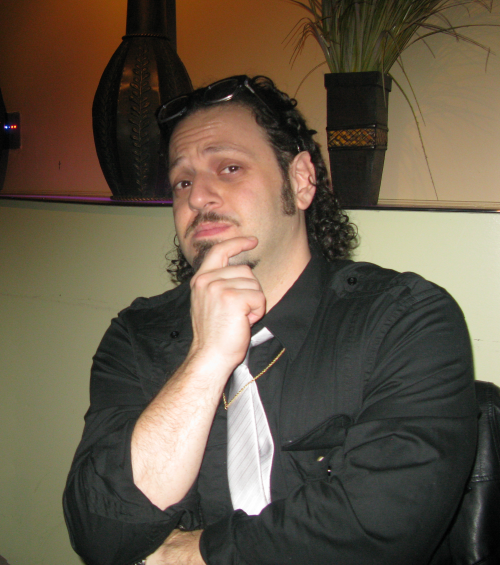 You never get a candid shot when you warn people about the flash. 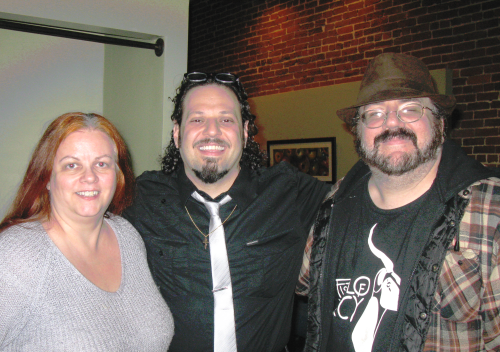 Melanie Larch, Rob "RJ" Haddy and your PopCulteer, all in the same place. (Photo by Rose Winland)

We have yet another weekend with an embarrassment of riches when it comes to cool stuff to do.  Check out this awesomeness…

Friday the big deal is the Aids Awareness Benefit Show at The Blue Parrot. Kicking off at 10 PM (Presented by the WV Modified Dolls & Foz Rotten) featuring music from Dinosaur Burps, The Tom McGees and Eighty-Three Eighty. The cover is five bucks, four dollars if you wear red, and proceeds go to the International AIDS Vaccine Initiative and Women Thrive Worldwide.

Also Friday, The Wegman Bros. with Cousin Larry will be performing at Timothy’s, below the newly-restored Quarrier Diner, from 8 PM to 11 PM, with no cover charge. Also with no cover, The Barko Loungers will be at Bruno’s starting at 9 PM and Chet Lowther will be at Taylor Books starting at 7:30.  The six-piece Hybrid Sould project will be playing at The Sound Factory from 9 PM until 2 AM with an unspecified cover charge. The Davisson Brothers make a surprise stop at The Empty Glass with Owen Schmitt at 10:30, for the usual Empty Glass cover charge. 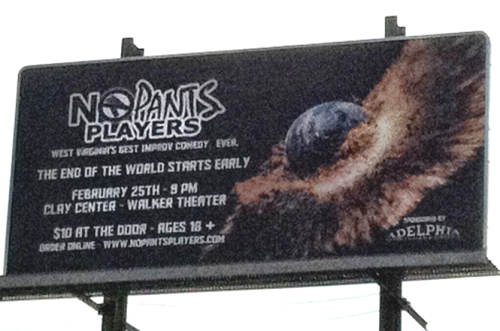 Saturday’s big deal is The No Pants Players’ Adult Show at The Walker Theater at The Clay Center.  Fifteen bucks gets you in the door for two hours of filthy, nasty, dirty improv comedy from WV’s filthiest, nastiest, dirtiest improv comedy troupe.  This show will feature cabaret-style seating and your favorite alcoholic beverages. We all know what happens with comedy once the party liquor starts flowing! The comedy kicks off at 9 PM.

Local artist Jeff Pierson takes on the emcee duties for the night, and local belly dance performers The Snake and The Pot will perform from 8:30 until showtime.

The Wood Boys present another epic all-ages show at Kanawha Players Theater starting at 6 PM.  Breedlove, the local Debut of Kentucky’s Dead on Fire, InFormation, ROFS, In The Company of Wolves and Relative Obscurity are on the bill. Attendees get a free Hot Dog & Drink with eacj ticket purchase. Rock Addict Radio will do a live show at 8:30, hosted by Lee Harrah. Admission is ten dollars.

Elsewhere Saturday night, Barrelhouse Bonnie brings her boogie-woogie/blues piano stylings to Charelstons UU Congregation at 7 PM to benefit the UU’s summer youth arts program, Creative Capers. Admission is five dollars, but more donations are welcome. At 7:30 The Disappearing Man will be appearing at Taylor Books with no cover charge. Five bucks gets you into the show by Mother Blues, Freak Tent and Farnsworth at Pats Bar in St Albans. After The No Pants Players, your PopCulteer will be headed to The Empty Glass to see RFC vets, WATT 4, and Trielement. The usual EG cover charge will get you in the door.

Last weekend, I went on a trip to Washington DC. Here’s part one of the photo essay… 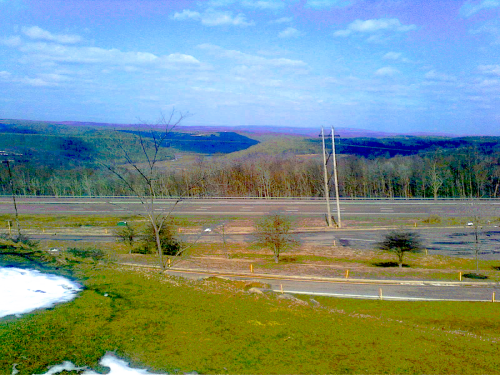 Taken from a rest area in Maryland. We listened to "Mr. Blue Sky" a lot on the way to DC. 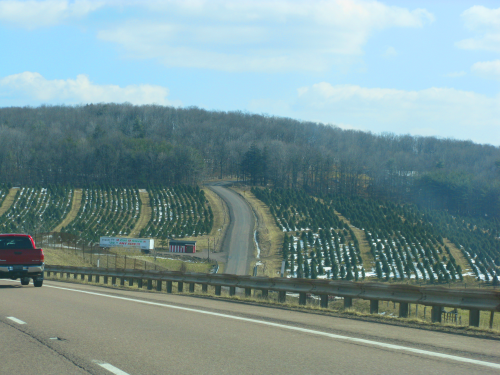 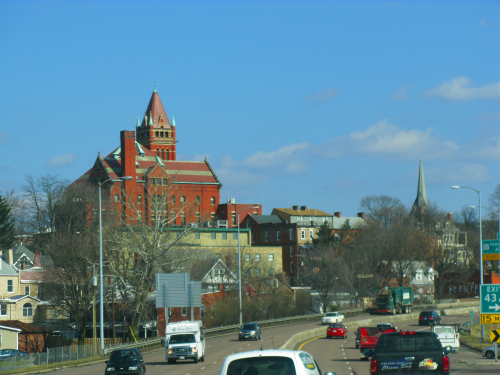 Not bad for a photo taken from a moving car in Cumberland. 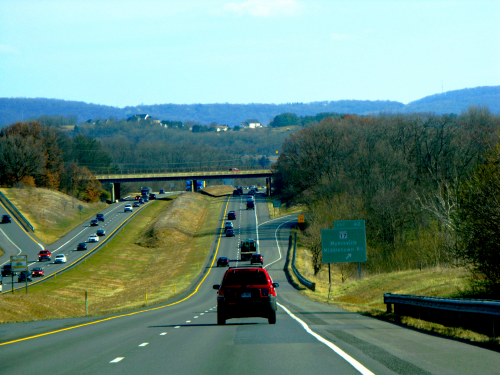 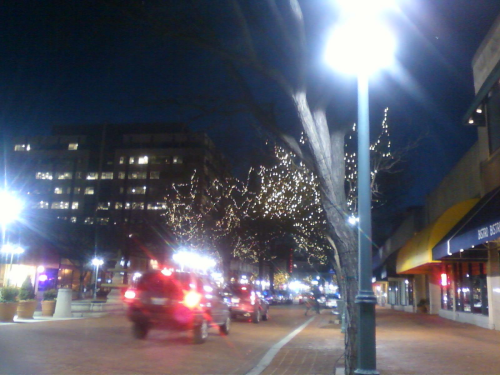 "...but soon comes Mr. Night." A street scene from Shirlington, where we stayed. 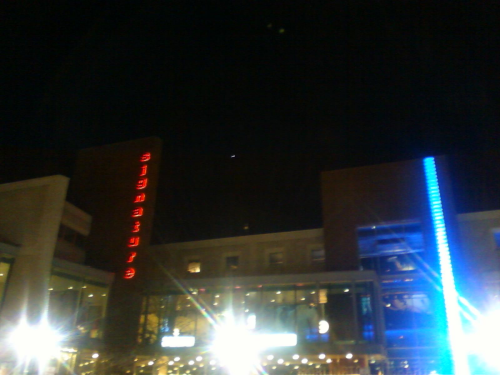 the Signature Theater in Shirlington, where we hung out for a bit. 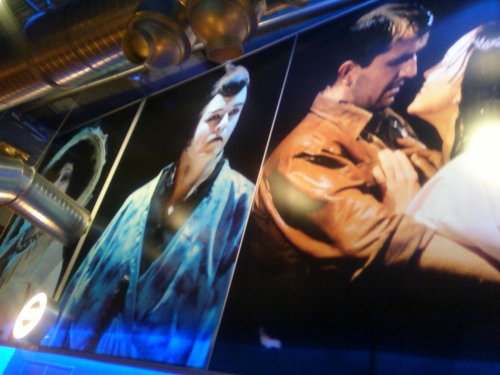 Inside the theater, 20-foot-tall photos of past performances. 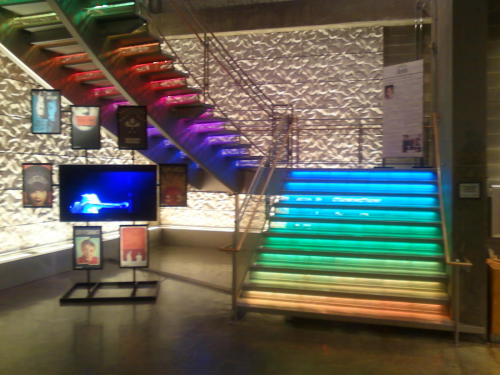 Animated LED stairs take you to the lobby/lounge, not Asgard, as you might suspect. 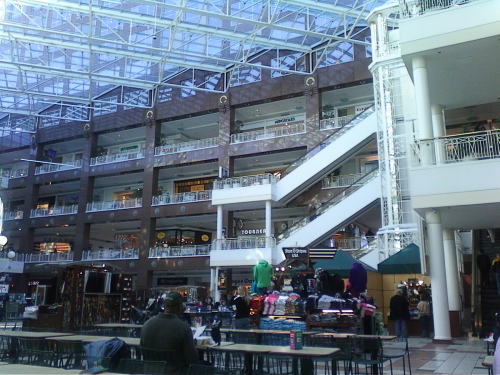 We abruptly shift to The Fashion Centre Mall at Pentagon City. True to its name, this mall was totally devoid of comic books, CDs and DVDs, and only had a few toys. A fedora kiosk made it worth the trip, though. 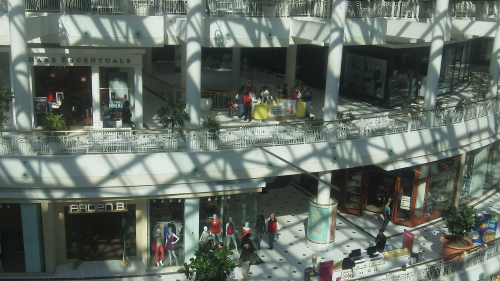 Seriously though, it's a huge mall, Melanie found all sorts of nice girly crap, and there are lot's of cool things to photograph there. 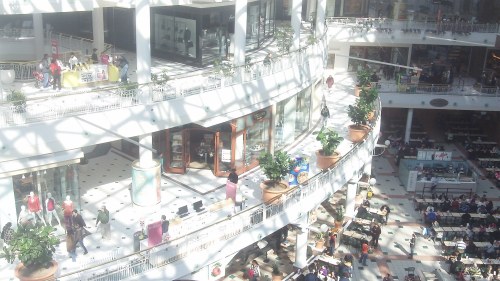 The shadows created all sorts of wild contrasts. 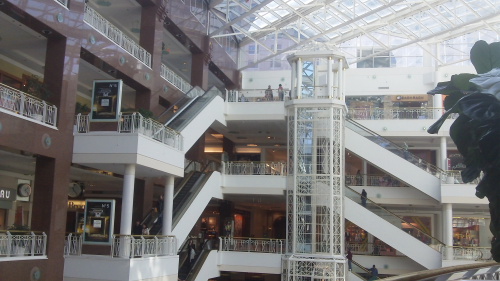 In places, it was sort of like being on a cruise ship, only without the risk of having a drunken Captain run aground causing you to die a horrible drowning death. 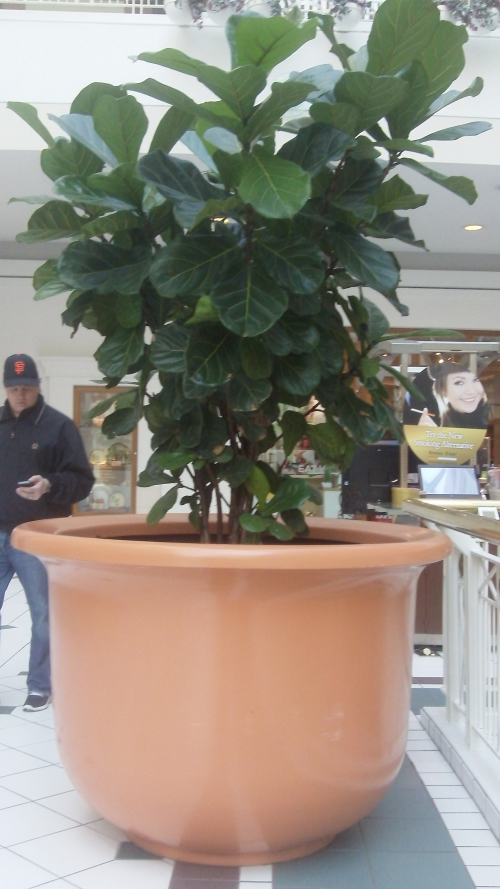 Check out the big damn flowerpot! 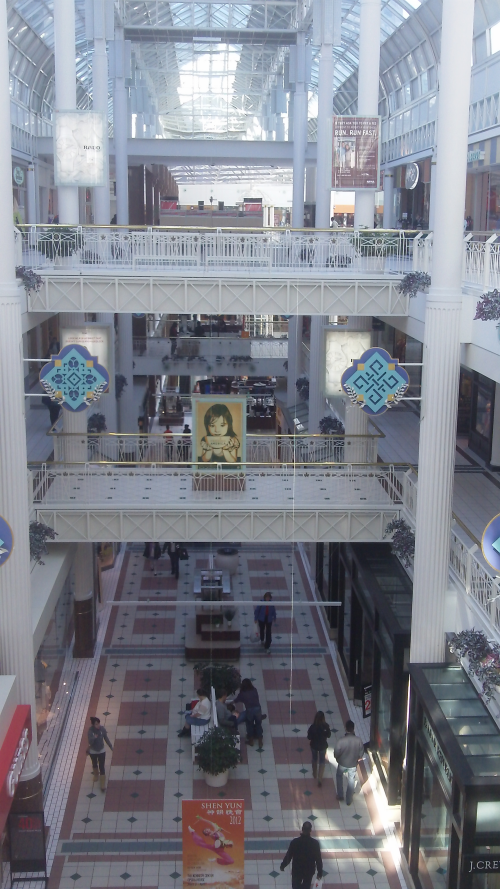 It's a cool photo, but I would've killed to have had a Super Ball at that moment.

Part two of the big DC photo essay will run in next week’s PopCulteer.

That’s it for this week’s PopCulteer.  Next week, there is a seventy percent chance that Radio Free Charleston 150 will be finished.  We’ll also have our other regular features and all sorts of cool surprises.

One last note: The PopCulteer would like to wish a speedy recovery for Charleston’s guitar maestro and inspiration to us all, Chuck Biel.  Hope to see you back onstage shredding again soon, buddy.