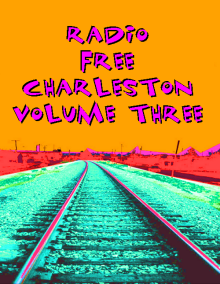 It’s the second week of RFC Volume Three on New Appalachia Radio at Voices of Appalachia. Every Tuesday morning we’re going to post the playlist for our new show which can be heard at 10 AM and 10 PM, and again Thursday at Midnight and late Saturday night at 2 AM (all times Eastern).

Starting next week RFCv3 expands to TWO HOURS each week. Our first hour will feature a variety of local and regional music, while the second hour will have a different theme each week. We’ll tell you more about that next week. After the jump, you can take a look at what you can hear on this week’s episode of the show: Notes on this show:

Paul Calicoat can be found at Route 60 Music in Barboursville which is one of the best guitar and music shops in the area.

Pepper Fandango is also a member of The Laser Beams.

“How Heavy Is Thy Crown” started life as a song co-written by Johnny Compton and Jason “Roadblock Robinson” for another band. When Compton joined Whitechapel District, he took the song with him and new lyrics were written by the band and Tim Simon.

The Liquid Canvas is James Vernon Brown, who is an amazing multi-media artist.

HarraH’s song is based on the comic book, CODA, which was written and drawn by Frank Panucci and edited by yours truly, way back in a previous century. The album with “Sanjula’s Junk.”

“Sanjula’s Junk” was written about a Freakshow performer named Sanjula, who did tricks with a certain part of his body.

“Vampire Mafia” was written and recorded when Flare Baroshi was still in high school.

I only got to see The Science Fair Explosion perform live once, and never got the chance to catch them on video for the show. Consequently, I have no idea what happened to them and would love to find out.

Next week RFCv3 expands to two full hours and our notes will probably be more sparse because I don’t want them to be twice as long as they are this week.