Wrapping up Monday in , we have the perfect gift the advocate of cannibas and CBD Oil on your holiday gift-giving list…if they have a healthy sense of humor. I reviewed this book earlier this year for PopCult, but it deserves another pass around, as a gift suggestion.

Master comics historian, Craig Yoe, has gone to pot…literally. This new collection of comics brings together some of the most hysterically dramatic and unrealistic portrayals of the dangers of marijuana that you’re likely to ever find. Reefer Madness Comics may very well be your gateway drug into the world of vintage crime comics.

It’s not all presented for laughs. Yoe’s introductory essay touches on the power of propaganda and how the comics medium was used to help villify marijuana, only to see the same tactics of junk science and ethically dubious evidence used against the comics industry in the 1950s. It’s a meaty topic and one well worth considering now that we seem to be living in the golden age of misinformation.

But beyond that, the real attraction in Reefer Madness are the comics. Comics that, no matter how skillful the creator, or how sharp their storytelling abilities, are solidly rooted in an almost total ignorance of their subject matter. These comics are uproariously entertaining because they are so spectacularly dumb.

The comics reprinted in Reefer Madness Comics (which takes its name from the classic and now campy propaganda film of the 1930s) read like Jack Chick Comics on drugs.

Mostly gathered from crime comics of the 1940s and 1950s (with a few exceptions), these comics are so over-the-top in their presentation of pot as being the most dangerous menace to society ever that they rise to a sublime level of ridiculousness.

With titles like “Satan’s Cigarettes,” “Hopped up Killer,” “Dope Menace” and “Monkey On Her Back,” you can be assured that you’re in for an epic unintentional humor contact high.

Evidently written by people who had absolutely no firsthand experience with marijuana, these cautionary tales are filled with wild behavior that no educated person would ever associate with the use of pot. There are murder sprees, robberies, prostitution and everything they could imagine. The Jack Kirby story (that’s a panel at the bottom of this post) is about a serial rapist/torturer/arsonist/murderer who is driven to kill when he doesn’t get his reefer!

Your reader will need to have a fine appreciation of irony and the absurd, and enough knowledge to determine how mind-blowingly silly these comics are, to find them as entertaining as I do. However, if you’re looking for the absolute perfect gift for a pothead or pothead sympathizer, you’ve found it. Processed through the mind of someone who, in their day, may have “smoke too many pot,” Reefer Madness Comics may elicit a manic giggling fit not unlike some of the bizarre antics seen in this book. You should be able to order it from any bookseller by using the ISBN code, or check Amazon for a sizable discount. 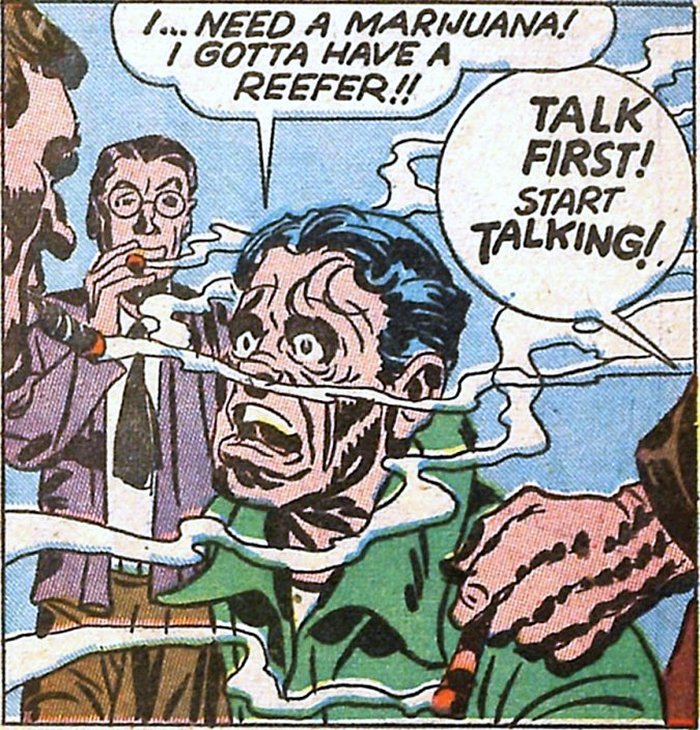