Revisiting An Old And Trusted Friend 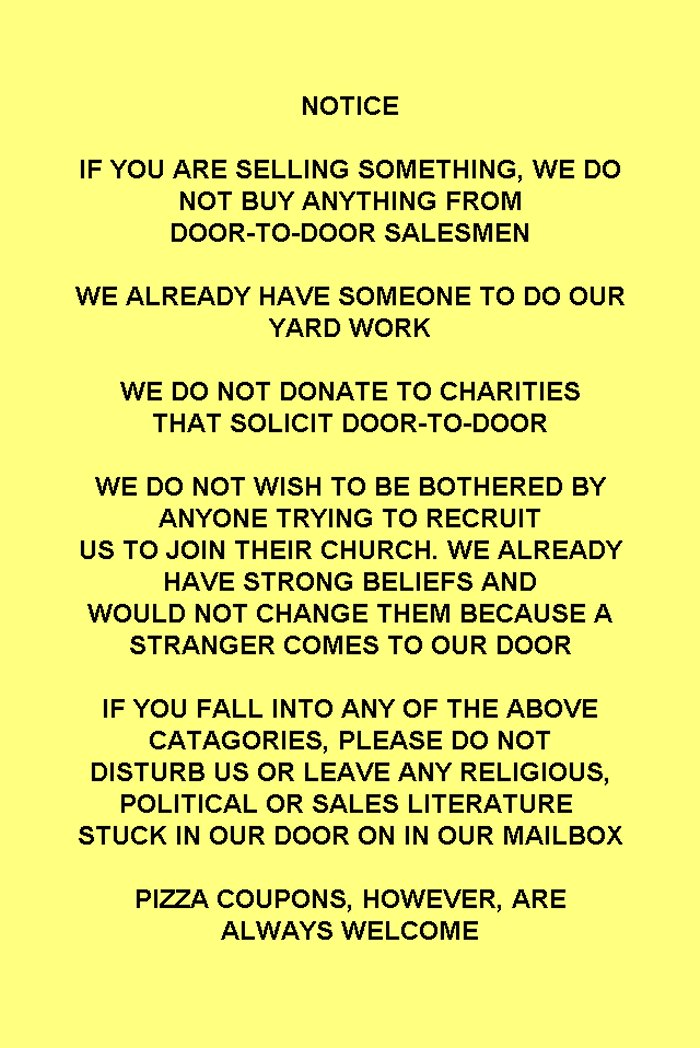 Fifteen years and eight days ago I posted in this blog about a very handy thing I came up with to keep me from getting pestered while I’m writing.

See, I work primarily from home, but the world at large seems to think that means that I can drop whatever I’m doing at any time of the day to run and pay attention to them.  People will knock at your door with no regard for what you might be doing or care how much of an imposition they’re making on your time and personal space.

This was particularly bad back when I was working at home and also acting as the full-time caregiver for my ailing mother prior to her passing. When I was administering IV antibiotics was not when I wanted the local Baptist church to pound on my door asking me to come to a revival.

So, inspired by Mark Evanier, I devised a sign, which you see above, to warn people that I would not be receptive to most interruptions. (You can click it to see it bigger)

It worked really well for seventeen years until yesterday when, one minute out of the shower, I heard a knock at my door. I threw my clothes on quick to answer it, thinking it might be a package or something urgent or important, but it wasn’t.

It was a nice young lady with a clipboard, who asked for me by name, and I instantly realized what was happening and blurted out “Oh for Christ’s sake! You’re not going to ask me to call Senator Manchin are you?”

Let me explain, I support earnest political activism by proud American Democratic-leaning patriots. I really don’t want to discourage people from getting out and doing productive things to help reverse the horrible downward slide that this country has been on, especially from 2016 to early 2021.

But…I have a sign on my door. It doesn’t specifically tell folks pushing politics to leave me alone, but it shouldn’t be that hard to figure out.

Also, I have followed the career of Joe Manchin for decades, and I know damn well that the man couldn’t care less about what his constituents want, or what’s best for them. He will show up for a photo op or a cash payment. The man is the worst kind of self-serving career politician, and no amount of phone calls left on his office answering machine is going to change that.

I don’t quite understand this sudden lust for phone callers to his office. For the last month my day has been interrupted three-to-six times by people calling to ask if I would hold the line so they could transfer me to Joe Manchin’s office so I could leave a message. I’m a freelance writer waiting for calls from clients most of the day. I can’t just not answer the phone.

After politely explaining to each caller that this was a complete waste of time (theirs and mine), and was very intrusive on my day for a couple of weeks, I started getting calls from robocallers offering to connect me to his office.

So I punched the buttons to patch me through to Manchin’s office and started leaving messages asking him to ban unsolicited political phone calls. A telemarketer is a telemarketer, regardless of what they’re selling.

I should also explain…I don’t text.  Due to Myasthenia Gravis, trying to use a touchscreen is a painful and time-consuming chore, so I installed software on my phone to block all notifications of texts. They pile up and I never respond to any of them…ever.  About once every two or three years I have to check my texts for some kind of security log-in thing, and that’s when I clean out the old texts, usually without reading them.

I had to do that last week, and was shocked to discover just over a hundred texts, all from different numbers, asking me to call Joe Manchin.

I took the time to block every number.

And then yesterday, I had that knock on the door. I was sympathetic and as polite as I could manage, but I also sternly explained that this was exactly the type of thing that turns people against your cause.

And then I made a second, more specific sign. I’m pretty sure this will come in handy. 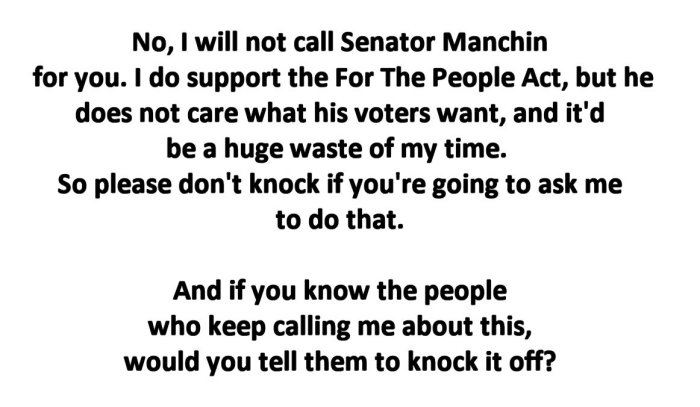