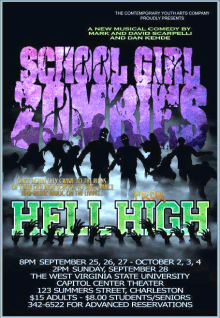 Opening Thursday night is the newest production from The Contemporary Youth Arts Company, a musical called School Girl Zombies From Hell High. As you may guess from the title, this is not your typical musical.The PopCult crew attended the dress rehearsal Tuesday night so we could bring you this preview, complete with videos of four songs. Keep in mind that these clips are from a rehearsal. By opening night, this cast will be a well-oiled machine.

With music by Mark and David Scarpelli and lyrics and book by Dan Kehde, School Girl Zombies is yet another in a long string of highly original, quirky works from CYAC. This musical tells the story of a high school that has been launched into a sort of limbo between life and death where the deceased and decaying students re-appear among the living once a year to celebrate their Halloween Homecoming.

The play begins when a group of living students decide to check out the legends and rumors as a means to cheer up their friend who recently lost her boyfriend in a car accident. It turns out the legends are true and her boyfriend is among the deceased student body. An explosion many years ago created a rift in the life/death continuum, which traps all the high school aged people who die in this town.

In this preview clip, we meet dead and decaying students of Hell High…

Rachel, well played by Molly Means, is thrilled to see her dead boyfriend, Zeke (Nik Tidquist), but learns that they can’t kiss without her losing her life.

School Girl Zombies From Hell High is like Brigadoon, Romeo and Juliet and Return Of The Living Dead had a baby–and it’s a musical!

Tensions rise when a zombie named Seth tries to run off the living kids and breaks into the song, “Trouble” (which may not be safe for work).

In the second act, after an accident with a love potion has rendered most of the characters hopelessly in love with other random characters, one of the zombies breaks into song about what it’s like to be seventeen.

Doc, the scientist behind both the initial explosion and the love potion mishap, addresses the conflict between science and romance in the gospel tinged showstopper, “The Science of Love.” Rick Fleenor is exceptional as Doc and is ably backed up by the entire ensemble in this number, particularly Maddy Gourevitch and Phil Washington.

School Girl Zombies From Hell High is a tremendous amount of fun. It’s not too gory for fans of musical theatre and it’s not too “Broadway” for fans of zombies. It should be noted that these are zombies of the dead, decaying and reanimated variety and not the non-verbal, predatory, brain-eating zombies who are all the rage on television these days. This is a great way to get into the spirit of the extended Halloween season. You’ve got clever lyrics, great music, and an exceptionally talented cast. Mandy Petry is terrific as the zombie principal and the band and ensemble do an amazing job. I regret that I do not have a full cast list so that I can single out the other standout performers. The entire cast is stellar.

You can check out School Girl Zombies From Hell High at the WVSU Capitol Center Theater, 123 Summers Street, starting Thursday night and running Thursday, Friday and Saturday evenings at 8 PM this week and next, with a 2 PM matinee this coming Sunday. For ticket information call (304) 342-6522.

If you need just a little more convincing, check out this promotional clip we put together for you.