Song Of The Week: Early Goth for an early Halloween 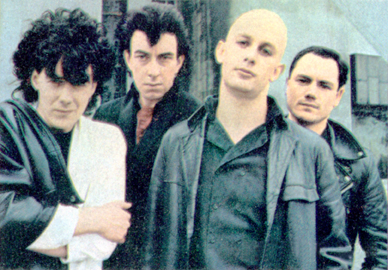 In honor of Friday The 13th, which falls in the Halloweeny month of October this year, our SOTW is a bit of prehistoric Goth from a Liverpool band called “Modern Eon.” Modern Eon were contemporaries of OMD and Echo and the Bunnymen, but they never quite caught on as big as those now-obscure 80s bands did.

“Watching The Dancers” is a dark, moody, yet poppy number that typifies much of the music that would go on to inspire a couple of generations of disaffected youth to shop at Hot Topic. It’s from their only album, 1981’s “Fiction Tales.” Modern Eon disbanded in 1982. The only notable work by a former member of the band is keyboard player Bob Wakelin’s career as an artist for Marvel Comics and computer game maker Ocean Software. It’s too bad, since these guys were pretty much near the top of the heap when it came to this type of downbeat-yet-not-too-depressing new wave music.