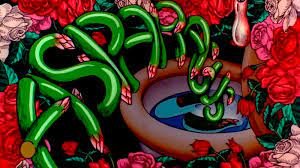 This week we bring you eighteen minutes of surreal, not-safe-for-work animation by the late Susan Pitt. Finished in 1979, after four years of work, it debuted as part of an installation at The Whitney Museum of Modern Art, Asparagus, which took four years to make, was eventually paired with David Lynch’s Eraserhead on the midnight-movie circuit. It’s a smorgasboard of sexual imagery mixed into a dreamlike stream of psychedelic consciousness.

Pitt went on to create several more animated shorts, as well as creating multimedia installations and contributing tanimated projections to many theatrical productions around the world. She also taught experimental animation techniques and Harvard and Cal Arts.

This is one of those experimental cartoons that you just have to stare at and soak in…unless you are easily offended by sexual imagery, in which case you should maybe skip this one.

Pitt died just over two years ago at the age of 75, from pancreatic cancer. I remember watching Asparagus one time in the early 1980s, when Danny Boyd was invited to the Dunbar Public Library to show a collection of short films. I don’t believe he was asked back.