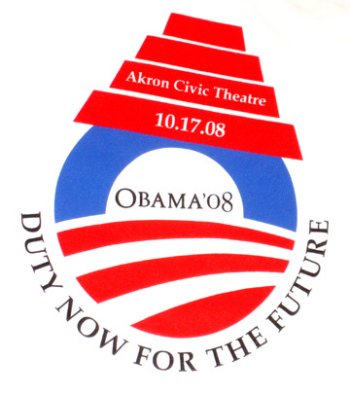 This week we are reviving a Sunday Evening Video entry from January, 2009. I posted this video in one of our early installments of this feature, but a week or three later, the Charleston Gazette once again reshuffled their blogging software, and the videos all disappeared and were replaced by naked code. I just restored this post as part of my never-ending “repair the PopCult archives” project, and I liked this entry enough to foist it on you fine folks one more time, now that our country has survived the most devolved presidency in history.

This particular show was so legendary that a website has sprung up, devoted to tracking down every bit of documentation of the event.

Our selections this evening are shaky bootleg audience videos shot during the fabled “DEVObama” benefit, held in Akron Ohio in October, 2008. What you see above is Chrissie Hynde, backed by DEVO and The Black Keys, performing “Breaking The Concrete,” the title track from the then-new Pretenders album.  In the original post I wrote that we brought you these clips in honor of the birthdays of David Lynch, Snoop Dogg, Bill Maher, Michelle Malkin, Alan Parsons, Malcolm McClaren, Lewis Grizzard and Slim Whitman the following Tuesday. Coincidentally, that was also when Barack Obama was inaugurated.

“Girl U Want” by DEVO

“Going Under” by DEVO