July 4, 2006, the video version of Radio Free Charleston made its official debut at The Gazz.com. Now, fifteen years later, we have a brand-new edition of our local music showcase!

Eight days ago as your PopCulteer and his lovely wife were heading to Madison, WV for our first music video shoot in 16 months, I realized that the fifteenth anniversary of the RFC video show was this year…on the Fourth of July, no less. I hadn’t done an anniversary episode of the video show since 2015, the year before my diagnosis of Myasthenia Gravis that caused me to cut back on the video stuff. So with a week to put a show together, I kicked into high gear and started trying to figure out what I could put in the show.

The two bands we filmed last week were in, as was the music video I’d been quietly working on for a couple of months. Then I dove into the vaults for some never-edited video of performances from 2008, and got some table scraps of animation from my brother, Frank Panucci, and I had the bulk of a show. All I had to do was head out and shoot host segments and then edit the show while my neighborhood sounded like a warzone, and here we are, just over forty minutes of local music and animation, featuring The Madison 2, Spurgy Hankins Band, David Synn, The Swivel Rockers and The Paris Project. Plus animation from Frank,  and editing by yours truly. The end result was Radio Free Charleston V2 218, “West Virginia Shirt.” 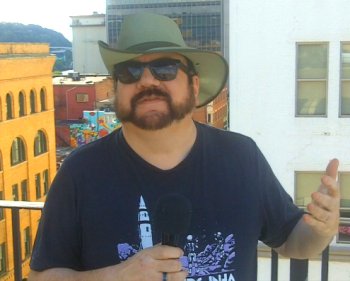 Host segments were shot on the roof of Charleston’s Quarrier Street Parking Building, which, while deserted, was not as quiet as we had imagined. Loud trucks, motorcycles, church bells and helicopters kept this from being a one-take show, which is why we have some jump cuts while I’m talking. I’m out of practice with this stuff.  Our namesake shirt for this episode come from Kin Ship Goods.  It’s actually called “Life On Mars” but I didn’t know that until I went to get the link.

Before we get into the music, there’s time for some senseless violence, courtesy of Frank. 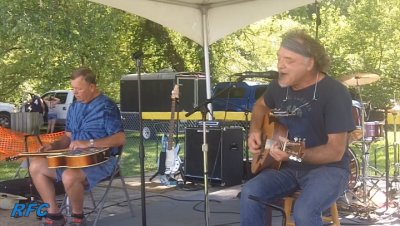 Our first musical guest is  The Madison 2, made up of Alan Griffth and Joe Toller. I’ve known Alan for over 30 years, and his band, Blue Million was a mainstay of the RFC radio show, and I still play them on occasion on the latest internet radio incarnation of the show. The song is “Indian Summer,” written by Alan with help from another old friend, John McIntyre.

The band has a CD out, co-produced by another old RFC friend, Stephen Beckner, and they should be posting details on how you can buy it on their Facebook page. I’ll keep you updated on their future shows here in PopCult.

We recorded The Madison 2 at The WVU Alumni Association Boone County Chapter Pig Roast, which is a fundraiser for scholarships for kids from Boone County, and it was a fun, if hot time. It was our first time shooting a band performing live since February, 2020, and the first time we’d shot a band outdoors since July 2019. The whole day was fun, if physically exhausting. 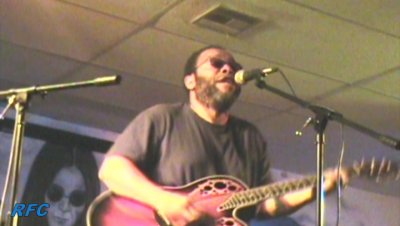 After a quick look at 3D printers, we dig into the RFC vaults.  Spurgy Hankins has been a Charleston musical institution for years. Every Tuesday you can still hear him at The World Famous Empty Glass…but in 2008 we caught up with him at The Blue Parrot and recorded three songs…and we only used one of them at the time.

13 years later, I’ve found the raw footage and remixed the video and audio and we bring you a new video, recorded in 2008, of The Spurgy Hankins Band perfrming “True Love.”

Keep in mind that this video was shot in standard definition, and this was even before we had our now-obsolete Kodak Zi8 cameras, so it may seem a bit fuzzy.

We have some quick animation, then we go back to Madison for The Swivel Rockers. 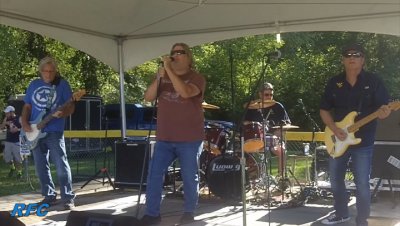 You may remember The Swivel Rockers from our most recent episode, and chances are that our next episode will be all about them too, but for this edition of Radio Free Charleston wehave a video I shot on the same day that as the Madison 2 video we brought you earlier in the show. As I explain in the show, we only have one camera angle for this song, because we didn’t notice that the angle of the sun caused the iris on our second camera to close completely, but it still came out pretty good, even without a second camera to cover-up my shaky camera moves.

We will tell you the entire musical journey and history of The Swivel Rockers in a special future episode of RFC, but for now, we have this one-camera shoot of The Swivel Rockers performing a song written by Alan Griffith and the late Jeff Miller, “Lost Without Your Love” You can buy that song on their self-title CD at their Bandcamp page 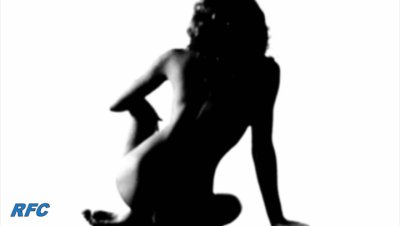 Next up we have a music video for a song by David Synn. David and I have been collaborating on music videos for more than a decade (I slip and say “almost a decade” in the introduction) and it was a blast to create a video for his piano tune, “Muse,” using animation and manipulated video, and incorporating some of my artwork to created a brief meditation how an artist sees his muse.

David has been very busy creating new music, and you can find “Legacy,” his EP that includes “Muse” as well as his previous and upcoming projects at his Bandcamp page. I’ll have another music video for one of David’s tunes in a week or three.

Finally, we have a ten-plus minute Jazz epic to close out the show. 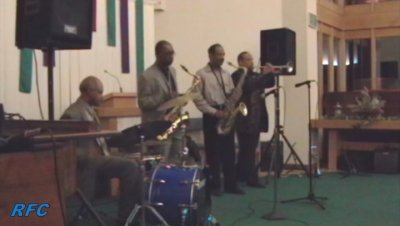 While digging in the vaults I found the raw footage for a great performance that we never got around to using on the show. This was shot the same weekend in March 2008 when we recorded the Spurgy Hankins Band song you heard earlier in the show. It’s Marshall Petty, Dugan Carter and The Paris Project, recorded live at UUC on Charleston’s West Side,  treating us to their take on Stanley Turrentine’s “Sugar,”

I am going to have to do some digging to bring you an update on Marshall and Dugan. I’ve lost touch with a lot of musicians during the pandemic and since my health issues forced me to cut back on attending live music, but I know both of these local musical legends were still playing in Charleston as of 2019.

And that is our show. It’s pretty ambitious for something that I pulled together in a week. A technical note on this show: I uploaded this to Vimeo, rather than YouTube. YouTube changed their terms of service, and now inserts commercials into every video and doesn’t give the video’s creator any money for it. They screwed up my monetization eleven years ago anyway but if I’m not getting compensated, I’m not about to let them randomly insert commercials every eight minutes in my 42-minute show. Combined with the way YouTube has changed the visibility of my videos and the way they seriously undercount my views, I’d rather do business with Vimeo.

So going forward, if I have a longer video clip, I’ll be posting it to Vimeo. I will be pulling out some of the music from this show and posting it to YouTube or Facebook, but the full shows will probaby be on Vimeo from now on. That will also apply to remastered shows for The RFC Flashback.

So…fifteen years of you guys seeing my ugly mug on video clumsily introducing local musicians and filmmakers, and it’s still fun to do. Who knows? Maybe 2021 will be the first year since 2015 where I crank out more than one video episode of Radio Free Charleston.

Keep in mind that you can still hear the radio version of Radio Free Charleston all the damn time over at The AIR.

Oh, and no, I have no idea what was going on with my hair in this show.