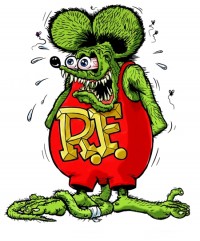 Today, we gather to praise a king among rats, the brainchild of custom-car legend, Ed “Big Daddy” Roth, Rat Fink. Ron Mann has been producing pop culture since 1978, and Tales of the Rat Fink is one of his finest. Mann’s tribute to Ed “Big Daddy” Roth will appeal to anyone who recalls the glory days of hot rods and custom cars.

Roth pioneered customizing in the late ’50s, taking his cue from the legendary Von Dutch, eventually becoming the first hot-rodder to sculpt custom cars out of fiberglass, the first to airbrush custom “monster” designs on T-shirts, and the inventor of Rat Fink. 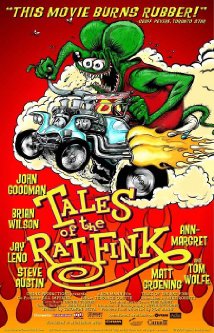 Rat Fink was the “anti-Mickey Mouse” adopted as the drooling mascot of rodders, surfers, model-building hobbyists and assorted misfits throughout the ’60s. Millions of kids wore the shirts, or slapped Rat Fink stickers everywhere in sight.

For this film, Mann paired up with Mike Roberts, whose animation brings Rat Fink to life in a fittingly “gross” manner.  John Goodman narrates as the voice of the late Roth, looking back at his creations.   Ann-Margret, the Smothers Brothers, Jay Leno, Brian Wilson, Stone Cold Steve Austin and others lend their voices to custom cars that “talk” with flashing headlights. Mann’s tribute perfectly portrays Ed Roth’s legacy as the creator of Rat Fink and the leader of a pop-culture rebellion.

You can purchase this documentary on DVD, which includes tons of bonus features.