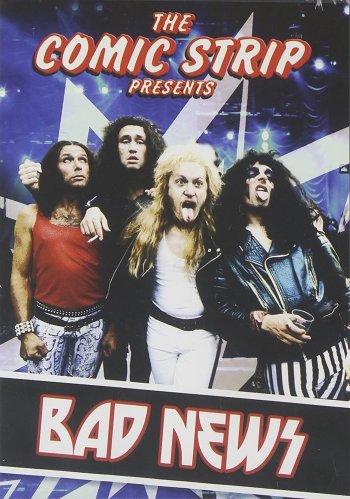 We’ve got some Bad News for you this week, but that’s actually good news. Above you see the classic episode of The Comic Strip Presents called “Bad News Tour.” Bad News were an English spoof heavy metal band that slightly predated Spinal Tap.  The first episode of The Comic Strip Presents to feature them was in producation at the same time as This Is Spinal Tap, but it was released a year before the Spinal Tap movie hit theaters.

The members of Bad News were Vim Fuego (aka Alan Metcalfe), vocals and lead guitar (played by Ade Edmondson); Den Dennis, rhythm guitar (Nigel Planer); Colin Grigson, bass (Rik Mayall); and Spider “Eight-Legs” Webb, drums (Peter Richardson). Edmondson (who also wrote the film), Planer and Mayall were all cast members of The Young Ones, which originally was also going to star Richardson, before he left after a fight with the producers prior to filming the pilot.

The most widely-seen episode of the show is the one you see above, featuring the fake band, Bad News. Despite being a joke band, they did score a hit in the UK with their absolutely hilariously awful cover of Queen’s “Bohemian Rhapsody.”  I posted this in PopCult a few years ago, but YouTube took that version down. It’s possible that this video may be yanked too, at some point, so you probably want to watch it soon. Below you see the lesser-known sequel, from 1988, it’s “More Bad News.”