Ten Years of The New Doctor Who 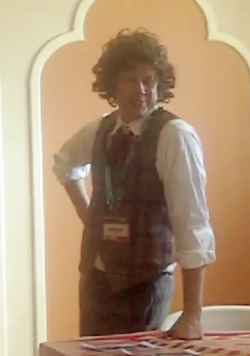 Ronn Smith, the producer and star of Doctor Who: The Classic Series Regenerated, takes a look at the highlights and lowlights of the revived version of Doctor Who, which is starting its tenth season.

Smith also presents a new trailer for his own, fan-made project, which revisits the classic Tom Baker era of the Doctor.

PopCult will present more video of ShockaCon 2015 all weekend long and into next week. You can see the Costume Parade HERE and Hurl Brickbats on the RFC MINI SHOW HERE.  Earlier we presented panels from American Horor Story,  The Walking Dead and Ari Lehman, the First Jason. Daniel Boyd presented a Horror Writing workshop, while a “Women In Horror” panel discussion stole the show. Professor Sinister’s Savage Sideshow has also been posted here. There were also three guys talking about science fiction toys.