The Horror Punk Summit at ShockaCon 2015 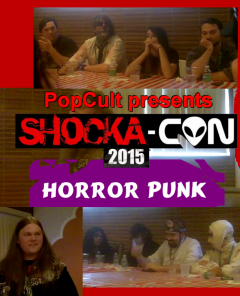 George Durbin III moderates a panel on Horror Punk music with Argyle Goolsby, The Renfields and The Cryptoids. The bands discuss their origins, their influences and talk about some of their most memorable shows.

All the bands on this panel performed at ShockaCon’s after-hours party, and showed off their horrific punk prowess. This panel has one edit where your PopCulteer had to switch cameras due to a battery giving out. So sadly we missed the part where Glenn Danzig stuck his head in the door and told everybody that they were better than he was. But the rest of the panel is a lot of fun, so you didn’t miss much.

PopCult has been presnting video of ShockaCon 2015 for several days now. You can see the Costume Parade HERE and Hurl Brickbats on the RFC MINI SHOW HERE.  Earlier we presented panels from American Horor Story,  The Walking Dead and Ari Lehman, the First Jason. Daniel Boyd presented a Horror Writing workshop, while a “Women In Horror” panel discussion stole the show. Professor Sinister’s Savage Sideshow has also been posted here. There were also three guys talking about science fiction toys. Our previous panel was all about the modern Doctor Who.