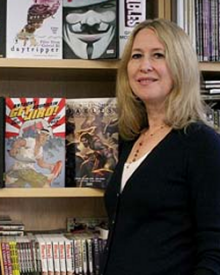 The comics world was saddened this week to learn that Karen Berger, the most influential comic book editor of the past thirty years, will step down from DC Comics’ Vertigo imprint, which she created twenty years ago, next March. We’re sure that some other publisher will snap up the woman who oversaw some of the best-selling graphic novels in history, but in today’s gift guide we’re going to recommend some of incredible comic book and graphic novel series that she was instrumental in bringing to light. They do make great gifts.

These book can all be ordered quickly from local bookstores and comic book shops, or from the usual online retailers. 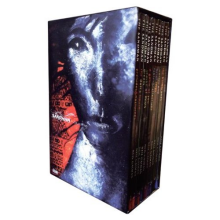 Neil Gaiman’s definitive Vertigo title, a mainstay of the New York Times best-seller list, invented a new mythology about the denizens of the supernatural plane, and their very human interactions with one another and with mere mortals. His unique style and vision could not have been executed without Berger pleading his case and convincing DC Comics that there was a market for intelligent graphic fantasy.

There are several ways you can purchase Gaiman’s epic run on Sandman. The entire series cn be found in a slipcased collection of softcover editions, which is probably the easiest way to read them, comfortably. This set has a list price of two-hundred bucks, but can be found heavily-discounted as cheap as $119. 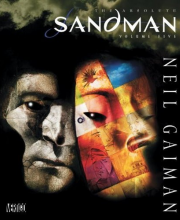 The Sandman Absolute Editions reprint around twenty issues each of the 75-issue original run, with the latest edition collecting some of the Sandman stories Gaiman crafted after ending the original series. There are five, oversized, hard-cover, slip-cased volumes that range in price from seventy to over a hundred dollars each. This is te definitived, “high-def” presentation of the series for the die-hard fan.

The Annotated Sandman is the latest re-packaging of the Sandman material, and it hasn’t been very well received. It’s an over-sized hard back series, each one reprinting around twenty issues of the comic book in black-and-white, on thin paper with a few notes by Gaiman, and even more by Leslie Klinger. This is more for the Sandman fan who’s interested in an academic re-examination of the series. The two volumes published so far have a list price of fifty bucks, but can be fo0und online for half that. 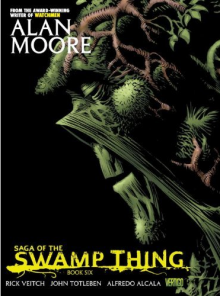 Karen Berger was an early champion of legendary writer, Alan Moore. She hired him to write his first American comic book series, a re-invention of the Len Wein/Bernie Wrightson class, Swamp Thing. Moore took over and put his own stamp on the stories of the muck-monster from the swamp, and set the tone for horror in comics that still sticks to this day. With his artisitic storytelling partners, Stephen Bissette and John Totleben, Moore struck a nerve with comic book readers, and under Berger’s editorial guidance, changed the way people see comic books.

Moore’s run on Swamp Thing, which Berger edited prior to the creation of the Vertigo imprint, can be found in six hardcover volumes, which list for twenty-five dollars each. Softocver editions are about ten bucks less, but are harder to find. Though not directly edited by Berger (Shelly Bond does the honors here), Fables is the end product of the working environment created by Berger at Vertigo. Creator Bill Willingham tells the story of fairy-tale characters exiled from their magical world, forced to live among “Mundys” (what they call normal people) in “Fabletown,” which is on Manhattan’s Upper West Side.

This long-running seres has spawned several spin-offs, and there are tons of very-affordable paperback collections (volume eighteen of the original series is due out in January). The compelling stories make great gifts and their appeal transcends the world of regular comic book readers. Both ABC and NBC have optioned Fables as a potential TV series in the past, and while both networks passed on the property, they apparently were impressed enough to borrow heavily from the concept for their shows, “Once Upon A Time” and “Grimm.”