Today in The 2021 PopCult Gift Guide we feature something that looms large in the landscape of pop culture–Dinosaurs!

They may be extinct, but there’s no denying that dinosaurs are really cool, and a lot of folks love and study them, and if you have someone like that on your holiday shopping list, check out today’s gift suggestions. 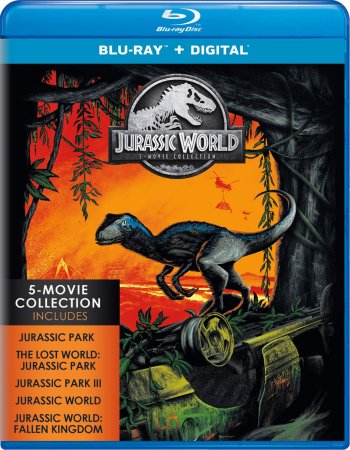 We start with a collection of the movies that have certainly inspired a lot of dino-interest for the last generation or three. Just check out the hype blurb…

Celebrate one of the biggest movie franchises of all time with the Jurassic World 5-Movie Collection! From Academy Award-winning director Steven Spielberg (Jurassic Park, The Lost World: Jurassic Park), Joe Johnston (Jurassic Park III), Colin Trevorrow (Jurassic World), and J. A. Bayona (Jurassic World: Fallen Kingdom), dinosaurs once again roam the Earth in an amazing theme park on a remote island. The action-packed adventures find man up against prehistoric predators in the ultimate battle for survival. Featuring visually stunning imagery and groundbreaking filmmaking, these epic films are sheer moviemaking magic which were 65 million years in the making. Welcome to Jurassic World.

These are newly remastered in 4K UHD, and every disc includes bonus features. Best of all, the price for the Blu Ray is less than thirty bucks, and the DVD is less than twenty-five. You can find them anywhere videos are sold, including Amazon.

Perfect for the person who loves the movies, or the kid who hasn’t seen them yet. You can bet your Jurassic that they’ll love ’em! 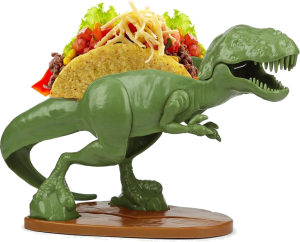 If you’ve got a kid (or an adult) who loves dinosaurs so much that they never want to be away from them, even at dinnertime, then these cool serving dishes are the perfect gift.

You can choose from the Tacosaurus Rex (A T Rex that holds two tacos), the Nachosaurus (a Stegosauraus that holds nachos, with an accompanying dip bowl), the Tricerataco (a Triceratops that holds one taco) and the Weeniesaurus (a Brontosaurus that holds a hot dog–and without losing control, either!). Follow the links in the names of the dishes above to order.

These might be a little Kitsch-y, but who said there was anything wrong with that?

These are a little pricey, but cool, and possibly a godsend if you have a dinosaur-obsessed kid who won’t eat their dinner.

Or if you know an adult with the same issue. 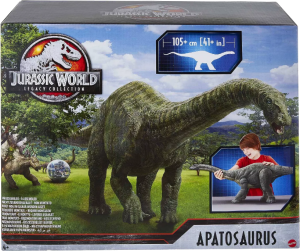 This massive toy dinosaur is a Target exclusive, and it’s a whopper!

Big-screen action comes alive with the huge Apatosaurus figure inspired by the whole Jurassic World franchise and one of the largest animals to have ever walked on Earth.

The Apatosurus is a dinosaur-lovers favorite and this figure is primed for playtime with posable legs in a size that will tower over other action figures and help kids and collectors visualize how big dinosaurs actually were.

The figure stands 12.23 inches tall, 6.5 inches wide. With its long neck and whip-like tail, it measures a gigantic 44.5 INCHES LONG.

The features and posability of this herbivore figure will inspire creative storytelling during playtime, but this dinosaur also makes for a massively impressive display.

It’s the perfect gift for kids ages 4 years old and up, especially Jurassic World fans and those who love dinosaurs and action play, and that includes adult collectors, who have been dying for an affordable, almost-to-scale giant beast like this. This is easier to find online that it is in stores. 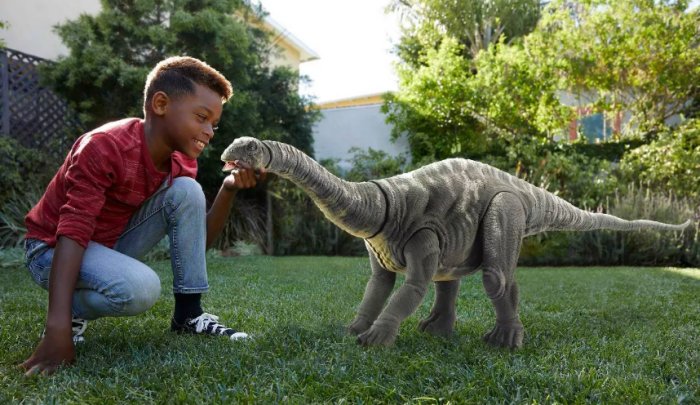 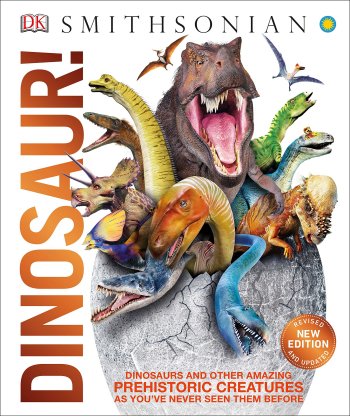 This fully revised edition of Dinosaur! is loaded with fascinating facts: Did you know that Velociraptor had three large “killer claws” on each foot to hunt down prey? Or that the long-necked Diplodocus was as long as three school buses? Would you believe that Carcharodon megalodon was an ocean monster with a fearsome bite at least six times stronger than that of today’s great white shark?

This dinosaur book for kids reveals more than 60 prehistoric creatures, from the age of the dinosaurs to the most recent Ice Age. From the flying Pterodactylus and ferocious Tyrannosaurus to the gigantic snake Titanoboa and magnificent wooly mammoth, this big book takes you up close and personal with these amazing animals. You too can become a dinosaur expert as you pore over pages packed with jaw-dropping 3D images.

With over two hundred pages, jam-packed with dinosaur info and illustrations, this is the perfect gift for any kid who’s just getting into dinosaurs, and it’d also be fun for the grown-up who wants to rekindle their interest.

Available from any bookseller, using the ISBN number. 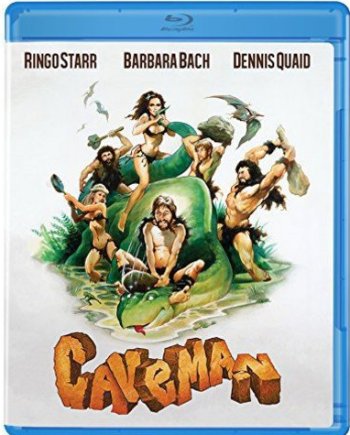 Our final pick is a bit of a ringer…or a Ringo-er, as it were.

Caveman, the 1981 prehistoric comedy starring former Beatle, Ringo Starr, along with Barbara Bach, Shelly Long and Dennis Quaid, is not an historically accurate depiction of our ancestors, who did not actually co-exist with dinosaurs.

However, this movie is chock-full-o primo stop-motion animated dinosaurs, courtesy of an uncredited Jim Danforth, and it’s loads of slapstick fun for kids and adults.

It also has a musical sequence that will stick with you for at least forty years (speaking from experience) and the actors do not speak English (except for a couple of lines), instead speaking in a language invented specifically for the movie. They did the same thing in the movie, Quest For Fire, which came out the same year, but nobody remembers that movie because it didn’t have Ringo, animated dinosaurs or fart jokes.

Caveman was directed by Carl Gottlieb, who co-wrote the movie, Jaws, but is probably more famous for his portrayal of Iron Balls McGinty in the movie, The Jerk.

This is the movie where Ringo met Barbara Bach, who would become (and still is) his wife, and it’s a fun gift for Beatles fans, fans of dinosaurs, fans of slapstick comedy, and anyone who doesn’t take prehistory too seriously. Available from Amazon and other video retailers.