It’s yet another day with no theme in The 2021 PopCult Gift Guide. As we get close to the end of this year’s guide, you can expect at least one more day of miscellany. Today we have music, reading material, apparel and a plumbing fixture.

Down the Rabbit Hole
by The Dollyrots
Order from their website, with a variety of bundles available 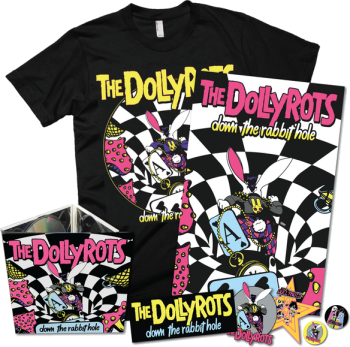 You may have heard music by The Dollyrots in movies, TV shows or commercials, or even on Radio Free Charleston. Now the band has a new compilation of rarities and this punk band with more than twenty years under their belts has tons of other cool items that tie into it, which you can find at their website.

Down The Rabbit Hole is a 24-track collection of rare B-sides and cover songs with a Dollyrots twist. The package includes a deluxe 2CD digipack with fold out poster, designed by SBAM.

The album will be available Worldwide at retail outlets and streaming platforms via Wicked Cool Records on January 7, 2022. But you can get it directly from them with Christmas delivery

The CD comes with a digital download, and the band will even autograph it for an extra five bucks.

To make sure you get it in time for Christmas in the US, you want to order before December 17. International orders are a bit of a gamble, but if you get your order to them by December 6, they’ll do their best. 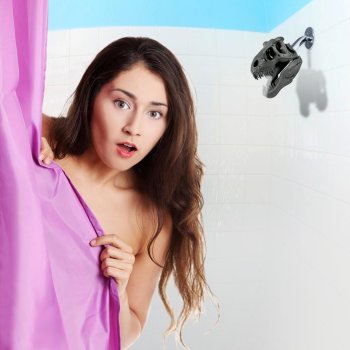 Okay, so this one is left over from dinosaur day. I’m doing my best to limit each post to five items, so this one got bumped, but it’s so delightfully goofy that I figured I’d drop it in here.

It is a shower head in the shape of a T-Rex skull. This might be a gift that goes a long way to promote good hygiene among the dino-obsessed kid (or adult) on your holiday shopping list.

After a hard day exploring, you’ll dig getting clean with Wash ‘n Roar Shower Head. Modeled after a real T-Rex skull, and made of durable, sturdy plastic, this carnivorous cleaner is made to fit any standard shower. Be a part of prehistory and always come out clean.

You can order it from FunWares. 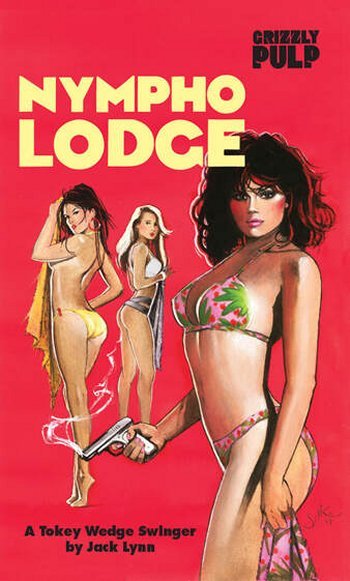 This is a good gift idea for your crusty old uncle who prefers whiskey and cigars to hot chocolate and mistletoe. It’s a hard-boiled, over-the-top, slightly naughty detective story, and it’s the first in a series.

Grizzly Pulp has resurrected one of the stars of the sleazy adventure pulps, Tokey Wedge. I have to be honest with you, I’d never heard of the character before I got this book, and it took quite a bit of research to convince myself that this was not a very cleverly-concocted modern day hoax/parody.

But it’s real. Tokey Wedge was the star of about 20 cheap pulp novels that were originally published back in the late 1950s/early 1960s. Cranked out by proflic “Men’s Adventure” writer Max van derVeer under his “Jack Lynn” psuedonym, these were originally put out by Novel Books of Chicago, reportedly a mob-connected publisher of sleazy pulp fiction who distributed them not through traditional bookstores and newsstands, but through an underground network of bars and establishments that kept them behind the counter.

Essentially, these books were “grindhouse” for folks with no access to a grindhouse theater.

The first book in the series, the subtly-titled Nympho Lodge, is loaded with gunplay, detective-novel tropes and lots of hilariously non-explicit sex. I have to give you a warning here: These books are politically incorrect, to say the least. The Tokey Wedge adventures are more than a little rapey, and they’re jokey about it. They do not treat women as much more than sex objects. There is also plenty of racism and homophobia on display. In the spirit of the stories, I would say that Tokey could star in a book called “My Trigger Is Huge.” The overwhelming amount of mysogyny, coupled with no small amount of racism and a boat-load of double-entendre made me have to do a double-Google to make sure I wasn’t reading a parody. However, this might make it the perfect gift for the hard-boiled detective fan on your shopping list.

Warnings aside, Nympho Lodge is a brisk, intentionally and unintentionally funny book that can be enjoyed as it was intended, or as a pretty bizarre and amusing artifact of its time.

Grizzly Pulp has done an amazing job here, recreating the look and feel of a cheap pulp novel, with thin cover stock and grayish pulp paper. The book is in the traditional cheap “pocket book” size around 4″ by 7″.

Nympho Lodge is not without its charms. It’s crass and crude, without being explicit, and that gives it an air of sleazy innocence, if that makes any sense. There’s a reason Tokey Wedge has a cult following. This one lands squarely in the “guilty pleasure” pile. If that sounds like a good gift for someone on your shopping list, I believe that Grizzly Pulp is currently running a special half-off sale, if you act fast and use the code SALTYSEAMEN) 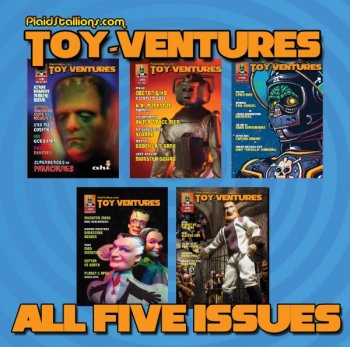 If you act really fast, you can snag a bundle of the first five issues of Toy Ventures Magazine for the rabid toy collector on your holiday shopping list. You need to act fast because the first issue is almost sold out, and they have to be shipping from Canada, which can add a few days to the package’s trip. You can order the bundle HERE.

Toy Ventures is the grand revival of the toy magazine, something which had disappeared from the face of the Earth for a few years.

I’ve probably mentioned this before, but I’m old. In fact, I am old enough to have begun my toy-collecting life as an adult in the time before there was such a thing as “The Internet.”

Back in those days, toy collectors got their news from magazines. There were several on the stands back in the early 90s: Jim Main’s Collectible Toys & Values, Lee’s Action Figure News and Toy Review, Tomart’s Action Figure Digest, Kalmbach’s Classic Toys, Toy Trader. I’m probably leaving out a few, but those were the leaders in the field.

Some of these magazines offered detailed, in-depth articles, printed on cheap newsprint, while others presented high-quality photographs of rare toys on expensive slick paper. They all filled a reference niche that the book market hadn’t quite caught up with yet. This was how you learned the history of the various toy companies and kept up with the hobby.

Then the internet happened and eventually they all went out of business.

Those classic toy magazines peddled nostalgia, and now those of us who were old enough to read them have nostalgia for them.

Happily, the nostalgia-merchants at Plaid Stallions.com (which is really Brian Heiler of MEGO Museum fame) have created a new toy magazine, Toy-Ventures, and I’m happy to declare that it’s an absolute treat.

Among the five issues you’ll find article on MEGO figures, The Lincoln International Monsters, The Outer Space Men, Rack Toys, toys based on Planet of the Apes, Space: 1999, Michael Jackson’s “Thriller,” The Munsters, Star Trek, KISS, Godzilla, Doctor Who, and tons of other cool toys from years past.

There’s hours of great reading material that’ll be perfect for the toy-lover on your shopping list. 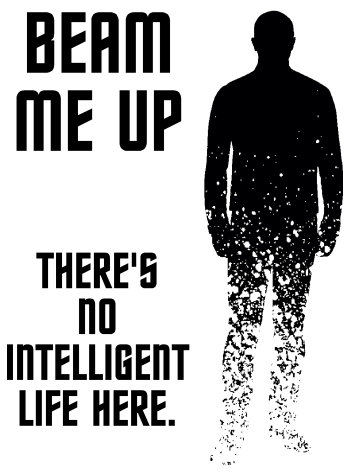 Beam Me Up Shirt

We have another cool shirt design from Thomas Wheeler here. Available in black or white on a variety of shirt colors, “Beam Me Up” is the perfect gift for a hard-core Trekker who might find themself someplace they’d rather not be.

They can show off their fandom and make a snarky comment about every at the same time. It’s the perfect shirt to wear to political rallies they don’t agree with, or if they really want to be anti-social, it can be worn to family gatherings, high-school reunions, or weddings and funerals.

Available sizes are small to 3 XL, and the shirts are currently on sale for a really low price (act fast). You can go with the white design on a dark shirt, or the black design on a light shirt.

Tomorrow The 2021 PopCult Gift Guide will offer up five ideas for “Turkey” gifts, in honor of Turkey Day. As for what that means, you’ll just have to wait to find out.