Today in The 2021 PopCult Gift Guide we’re going to recommend five comic books (or graphic novels) that are not just superhero comics. These are aimed at older readers, for the most part, and deal with topics that usually aren’t covered in mainstream comics. Two of them do have superhero ties, but these are recommended for the graphic novel fan on your shopping list who isn’t into capes.
You should be able to order these books from any bookseller, or just follow the link in the ISBN number to find them at  the evil empire, probably for a discount.

The Most Important Comic Book on Earth: Stories to Save the World 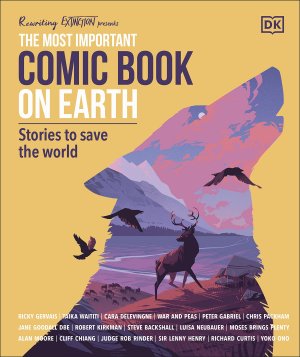 The Most Important Comic Book On Earth is a global collaboration for planetary change, bringing together a diverse team of 300 leading environmentalists, artists, authors, actors, filmmakers, musicians, and more to present over 120 stories to save the world.

Whether it’s inspirational tales from celebrity names such as Cara Delevingne and Andy Serkis, hilarious webcomics from War and Peas and Ricky Gervais, artworks by leading illustrators David Mack and Tula Lotay, calls to action from activists George Monbiot and Jane Goodall, or powerful stories by Brian Azzarello and Amy Chu, each of the comics in this anthology will support projects and organizations fighting to save the planet and Rewrite Extinction.

Among its 350-plus pages, you’ll find short comics written by Taika Waititi, Dame Judi Dench, Yoko Ono, Peter Gabriel, Lenny Henry and many more from a wide variety of fields, all expressing their concerns about the planet.

This is a great gift, appropriate for all ages, that will lay out how important environmental issues are. 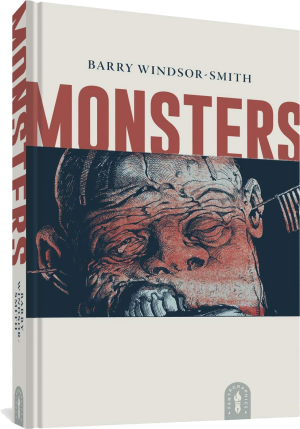 The story behind this book is fascinating. Originally pitched by Barry Windsor-Smith to Marvel as an alternate-universe origin story for The Hulk in the early 1980s, he never got a contract to work on the book, and was shocked, years later, to discover that the key points in his pitch had been “borrowed” by the regular writer for The Hulk and had been incorporated into the mainstream version of the character.

Burned by Marvel, Windsor-Smith spent 35 years reworking the story with original characters replacing the Kirby-Lee creations, and the end result is a 380-page epic graphic novel that raises the bar for the art of graphic storytelling. No longer a mere throwaway Hulk story, Monsters is an entirely new work that explores the themes of control and abuse in searing detail. We go to the publisher’s blurb…

The year is 1964. Bobby Bailey doesn’t realize he is about to fulfill his tragic destiny when he walks into a US Army recruitment office to join up. Close-mouthed, damaged, innocent, trying to forget a past and looking for a future, it turns out that Bailey is the perfect candidate for a secret U.S. government experimental program, an unholy continuation of a genetics program that was discovered in Nazi Germany nearly 20 years earlier in the waning days of World War II. Bailey’s only ally and protector, Sergeant McFarland, intervenes, which sets off a chain of cascading events that spin out of everyone’s control. As the titular monsters of the title multiply, becoming real and metaphorical, literal and ironic, the story reaches its emotional and moral reckoning.

Monsters is the legendary project Barry Windsor-Smith has been working on for over 35 years. A 380-page tour de force of visual storytelling, Monsters’ narrative canvas is both vast and deep: part familial drama, part political thriller, part metaphysical journey, it is an intimate portrait of individuals struggling to reclaim their lives and an epic political odyssey across two generations of American history. Trauma, fate, conscience, and redemption are just a few of the themes that intersect in the most ambitious graphic novel of Windsor-Smith’s career.

Monsters is rendered in Windsor-Smith’s impeccable pen-and-ink technique, the visual storytelling with its sensitivity to gesture and composition is the most sophisticated of the artist’s career. There are passages of heartbreaking tenderness, of excruciating pain, and devastating violence. It is surely one of the most intense graphic novels ever drawn.

Definitely not for children, Monsters is a mature work of great beauty and ugliness. Recommended for fans of intense entertainment. 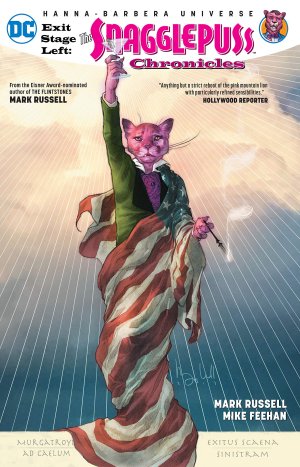 From the acclaimed author of Second Coming and Snelson, we have this amazingly bizarre reboot that takes the second-tier Hanna-Barbera character, Snagglepuss, and reimagines him as a Southern Gay Playwright dealing with the cultural climate of the 1950s.

Let’s go to the blurb…

Drama! Comedy! Tragedy! For the renowned Southern playwright called Snagglepuss, these are the ingredients that have made him a star of the New York stage and the glittering world that surrounds it. But the year is 1953, and behind the bright lights, darkness is brewing. Snagglepuss is gay… and his enemies are out to destroy him for it.

The idea of Snagglepuss as some kind of alternate world Tennessee Williams could just be cheap fodder for comedy in lesser hands, but Mark Russell takes that idea and springboards into a rich tapestry of social commentary, satire, absurdity and fun. Mike Feehan’s art is the perfect complement, and together that makes Exit Stage Left a wonderful piece of work. 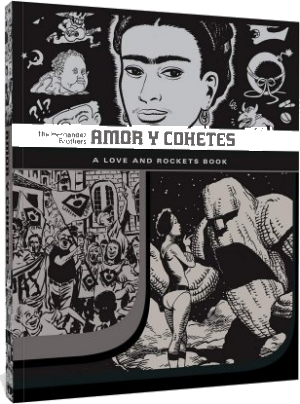 This is a new edition of a Love and Rockets book that was originally published in 2008. One never-before-reprinted single-page comic strip has been added for this printing.

Amor y Cohetes is the seventh volume in the “Complete Love & Rockets” series of compact, affordable paperbacks. I recommend all volumes of this incredible work. They are some of the best comics ever made, period. Gilbert and Jaime Hernandez are masters of graphic storytelling, and Mario is no slouch, either. I’ve praised their work in this blog since before the first printing of this book, and they still produce some of the best comics in the world.

However, since this collects some of the lesser-known works from one of the most important and influential comics of the 1980s, we’re going to take advantage of the new printing and revisit these gems. Amor Y Cohetes: A Love and Rocket Book collects together in one convenient package all the non-Maggie and non-Palomar stories by all three Hernandez Brothers from that classic first, 50-issue Love & Rockets series—a dizzying array of styles and approaches that re-confirms these groundbreaking cartoonists’ place in the history of comics.

People sometimes forget that there is a third Hernandez brother, Mario, who though less prolific than his siblings, is still a powerful storyteller. Because he never launched a long-form series within Love and Rockets, like Gilbert’s Palomar tales or Jaime’s Mechanics universe, he sometimes gets the short shrift. This book of short stories by the trio shows how good all three brothers are.

I don’t think I really need to sell experienced readers on Love and Rockets. If you’ve read their other works, you know how great they are. This is a good introductory volume for new fans because the shorter stories will allow them to become acclimated to the Hernandez’s classic storytelling style without being intimidated by tons of backstory.

Recommended for anybody who loves great comics, and Love and Rockets fans who might now have these stories in their collection. 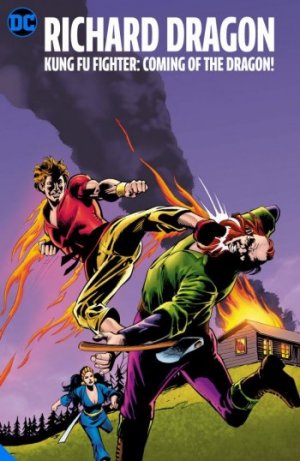 This one is a bit of a cheat. While Richard Dragon is not a superhero, per se, he does hang out with them, and characters created in this series have turned up in The Suicide Squad, Young Justice and Batman. But this collection is pretty much capeless, being Kung-Fu adventure, rather than pure superheroics.

This collection of mid-1970s comics is a rare treat for yours truly. Richard Dragon, Kung-Fu Fighter: Coming of the Dragon! collects the entire run of a comic book that I did NOT regularly read or buy back in my early days of comic collecting. I think I only had three or four of the stories reprinted here before the volume was released.

This is remarkable because the book is largely the work of one of my favorite comic book writers, Dennis O’Neil, who passed away last year shortly before the publication of this book was announced. The art assignment was passed around to many diverse hands before landing with the overlooked and underappreciated Cuban master of comics art, Ric Estrada.

The story itself is a wild adventure yarn, with one foot planted firmly in the early-1970s Kung-Fu craze and the other in the world of gritty pulp novel series like Mack Bolan and The Destroyer. Richard Dragon is a teenaged thief who is taken in, trained in martial arts and put on the right track by O-Sensei. Later Dragon and his dojo buddy, Ben Turner, join an international crime-fighting and anti-espionage agency. Most of this is new to me, and it’s a real kick.

These stories are top-notch globe-trotting martial arts adventure, presented for a mid-1970s comic book reading audience. There is no explicit sex or language, but there’s plenty of martial arts action and espionage intrigue to keep the action fun and entertaining, and O’Neil was a master at character development and direction.

Richard Dragon, Kung-Fu Fighter: Coming of the Dragon! is a damned fine collection of martial-arts adventures comics. It’s a time-capsule of the Kung Fu craze of the 1970s and it has some excellent storytelling. That DC is still mining this series for movies, TV and cartoons is a testament to its timeless qualities. Perfect for the fan of Martial Arts who also enjoys comics.