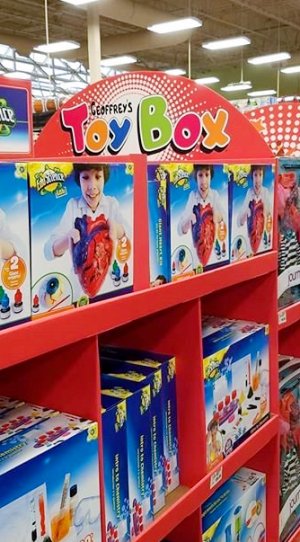 It’s a short PopCulteer today. We are still in the midst of the 2018 PopCult Gift Guide and that’s eating up a lot of our writing time. I do want to remind you that you can still tune in to The AIR, our sister internet radio station, at the website, or on this embedded player…

We’re hoping to bring you new episodes of our music programming next week, including Radio Free Charleston and a very special 50th episode of Mel Larch’s Curtain Call. In the meantime, we’re still bringing you the best independent re-runs you’ll find anywhere.

Also, before we get to our main topic today, since we posted our suggestion for the 2018 HESS Toy Truck, they have released a commercial, which you can see right here… 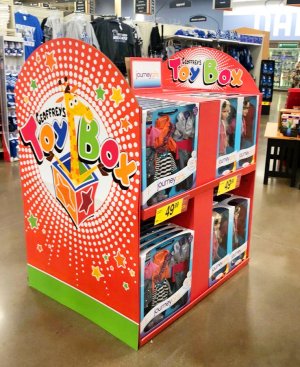 News broke late last week that the much-vaunted “Geoffrey’s Toy Box,” the psuedo-revival of Toys R Us following their bankruptcy, is a bit of a fizzle. Rather than partnering with Kohl’s, which is what I thought would happen, it turns out that their retail partner is Kroger.

We will be getting Geoffrey’s Toy Box in all the local Kroger locations, and to be honest, it’s no big deal. There will be cardboard dumps on pallets with Geoffrey’s Toy Box markings, and all that they will hold will be the private-label Toys R Us knockoff brands, priced twenty to fifty bucks each, with are not terribly appealing.

There are only 35 different toys, and most of them are, to be frank, boring and unspectacular. They are also priced so that they can be marked down 50% and still turn a profit. The only item they have that I found even remotely interesting is the bucket of toy soldiers, and I picked those up at their regular price of ten dollars last year, before TRU announced their liquidation.

This just seems like a way for them to wring a few bucks out of the private-label toys that were already in the pipeline to be delivered after the liquidation ended in June. So it’s there if you’re interested.

By the way, Kohl’s did not pick up Geoffrey’s Toy Box, but they did acquire the over-priced and underwhelming selection of toys marketed under the FAO Schwarz name. This was the stuff that FAO sold through Bon Ton stores (including Elder-Beerman), so if you passed up any of this stuff when it was 90% off during the Elder-Beerman liquidation, now you can go to Kohl’s and pay full price. It’s exactly the same stuff.

Also, the promised KBToys revival in time Christmas is not going to happen. There is no official word, but there are rumors they may try to launch permanent stores next summer. It also looks like we are not going to get a Go Games store anywhere near Charleston this year. With any luck, they will greatly expand the toy department in our local Best Buy, which is happening in some stores nationwide.

With that piddly news, we sign off this PopCulteer, and jump back into the 2018 PopCult Gift Guide. This weekend brings two more BIG TICKET DAYS and then on Monday we’ll try to keep every gift suggestion under sixty bucks again.