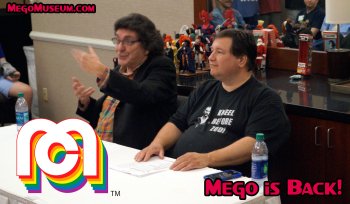 The news I hinted at last Sunday is true. MEGO is back. At the recently-concluded MEGO MEET in Columbus, MEGO’s president, Marty Abrams, announced that his much-loved company, which ruled the action figure roost in the late 1970s, is back. Abrams was accompanied by Paul Clarke (AKA Dr. MEGO), who I know has been twisting Marty’s arm for years to get him to jump back into the game. With the help of some well-heeled investors, his dream has finally come true.

The MEGO Museum is a major source for info on this post, and you should bookmark them to keep up with all the latest details as they come to light. We swiped our graphic at the head of this post from their story. There is a planned “official announcement” that will spill all the beans planned for mid-June at the Long Island Comic Con.

What we know so far, thanks to the MEGO Museum and the live-stream of Marty’s panel on Facebook, is that there will be 20 figures in the first wave, from a variety of pop culture licenses. The only one we know for sure is that there will be a figure (or figures) of Jimi Hendrix, officially approved by the Hendrix estate. There will be figures in the traditional MEGO 8″ size, but also in a variety of other scales due to licensing issues. Abrams mentioned fourteen-inch tall figures as one possiblity. Aside from the Hendrix figure, it was hinted that some of the favorites from the original run of MEGO will be in the mix, along with several new properties. Speculation is running rampant, and we’ll resist the urge to indulge in print, but we have some ideas of what might be coming. I’m certain there will also be a lot of surprises in store in just a few days.

Best of all, these figures will be aimed at the mass market, which means you should be able to find them at Walmart and Target, along with any other retailer that sells toys and collectibles. At left you can seen some vintage MEGO in a photo from the PopCult archives.

PopCult will keep you posted on future MEGO developments, but if you’re a fan of the original toys, you really need to make the MEGO Museum a regular stop on your internet travels and like their Facebook page. If you are really a die-hard fan of MEGO, then you need to sign up to be a “MEGO Ambassador” for regular email updates directly from the new MEGO Corporation.  If you employ the search engine which should be to the right of this post, you can find several PopCult posts from previous years devoted to MEGO. Most of them still have the photos online along with them.