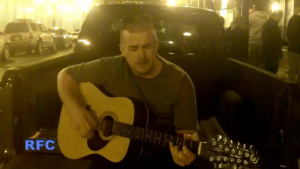 At the head of this post, you see Radio Free Charleston 122, “Fistful Of Mercy Shirt.” This episode of the show dates back to March, 2011, and featured music from Roger Simms (seen right), Drop Ded Phred, and a return visit from Sasha Colette. We also had a preview clip of the Contemporary Youth Arts Company production, “A Service For Jeremy Wong” (courtesy of Austin Sussman), and animation from Frank Panucci.

Host segments were shot in the friendly confines of Taylor Books Annex Gallery, prominently featuring the art of our old friend, Charles Jupiter Hamilton in the background. The namesake shirt for this episode is a t-shirt featuring the band logo for the group, Fistful Of Mercy, which included Ben Harper, Joe Henry, and longtime RFC fan, Dhani Harrison.

Our first musical guest was Roger Simms. I met Roger & spoke to him about being on the show, when he said OK, grabbed his twelve string, and walked me out of the Blue Parrot to a pickup truck on Capitol Street where he let down the tailgate, hopped in, and treated me to a couple of songs. We included one of them in this show.

Our animation from Frank Panucci, “Texting Tragedy” is a serious look at the problem of driving while distracted, which was the disposable cause of its day, back when all the TV stations were asking viewers to sign pledges not to use their cell phones while driving. These would be the same stations that now ask viewers to download the WAZE App so they can report on traffic conditions while they’re driving.

Drop Ded Phred is up next, and the four-year wait from the time I first saw them to the time I finally recorded this punk-pop-powerhouse was well worth it.

Closing our show is the ever-wonderful Sasha Collette, recorded at LiveMix Studio, back in the day. Check back in this space next Saturday for RFC 123, with Andy Park and QiET.