The legendary Velvet Brothers, reunited in September, 2014 at Bruno’s on Leon Sullivan Way in Charleston. In this edition of The RFC MINI SHOW you can hear them perform “Savannah Rose” and “De Do Do Do, De Dah Dah Dah.”Yes, that latter song is a cover of the old Police tune, rendered in a velvety-smooth lounge version. 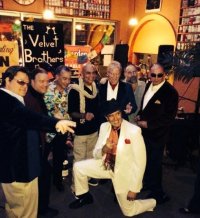 The Velvet Brothers were the first full band that I featured performing live on the Radio Free Charleston radio show way back in 1989. We’d had some acoustic performances on the show, but never a full band. The studio wasn’t big enough to hold the entire band, so we ran cables all over the building with the drummer in the hallway, the bass player in the production studio, and the keyboard player in the newsroom. With the guitarist and vocalist in the FM studio with me, the band managed to create a magic moment, even though it was three in the morning and they’d just played a full set at The Charleston Playhouse earlier in the evening.

This shoot, about a month ago, was a blast. Bruno’s was packed. I was straddling a potted palm tree in what turned out to be a lounge/mosh pit. At one point I think I rode the tree into the keyboard player, “C.R. Smoothee.” We got some great music and now you can enjoy a little more of The Velvet Brothers.