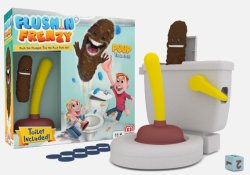 It’s not every day that you sit down to write an article about a hot new trend in toys–the use of poop as a play item–and find yourself scooped by The Associated Press.

I’d actually planned to write this post last week, but held off because, well, I didn’t think anybody else would bother looking in-depth at this topic. I was wrong. To be fair, this is a trend in toys that I predicted almost five years ago, so you could say that I was some kind of fecal visionary, or scat prophet. At the very least, when it comes to toys and grossout trends, I know my poop. 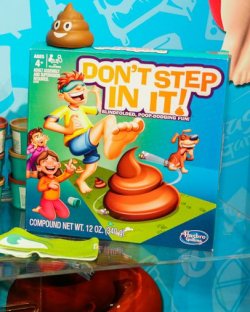 This year at Toy Fair Mattel introduced “Flushin’ Frenzy,” a game in which kids compete to see who can grab the turd that comes flying out of a plastic toilet while it’s being plunged.You can see it above.

Hasbro countered with “Don’t Step In It,” a game where players are blindfolded and have to avoid stepping in Play Doh-ish poop. It’s sort of like pin the tail on the donkey, if you use a real donkey…and follow behind him. That one’s to the left.

There is also poop elsewhere in the toy section, as two new collectible lines are already in stores. Spin Master makes “Flush Force (right),” a blind-bag collectible with over 150 tiny plastic disgusting characters that live in a plastic toilet (sold separately).

Another blind-bag collectible is “Poopeez (left),” from Basic Fun, who have the advantage of being squishy.

Unlike Flush Force, Poopeez also actually happen to be poop, and come with commode accessories. Both of these are “blind-bag” toys, which means that kids will be asking parents to buy them bags of poop, without knowing what they’re getting. Sometimes life really is like a box of chocolates.

You can find both of these now at Target and Toys R Us. 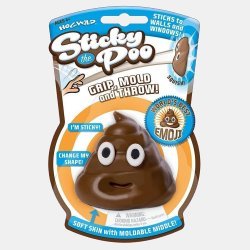 Hog Wild makes “Sticky The Poo (right),” a squishy poop-emoji-esque figure with eyes, that clings to walls and ceilings when thrown. Just the thing to help train the kids how to behave, right? There is also a Sticky Unicorn Poo variant, and a Plunger, sold separately. I guess some toy companies really will throw anything against the wall to see what sticks.

There is also “Poo-Dough (left),” which is modelling clay, scented, but apparently not to smell like poop, that comes with a mold that lets you make realistic poop logs.

Smaller companies have squeezed out dozens more poo-centric toys this year, but if I sit here broken-hearted pondering them any longer my legs might fall alseep, so we’ll just wipe it up here.

There are two words I have agreed never to use in PopCult, and at the moment, I really wish I had access to one of them. Anyway, it looks like 2018 will be the year that the poop really hit the fan in the toy aisle. The message to kids: It’s never to late to start playing with your poop!