Vlad and Niki Surprise Us With Toys 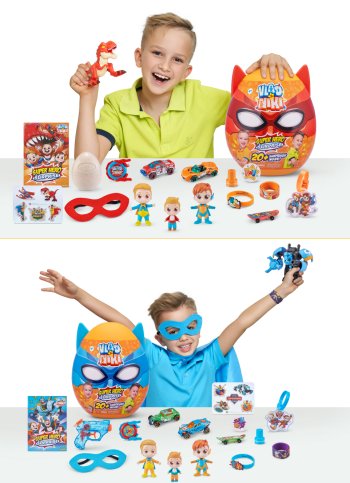 As my readers know, I cover pop culture here in PopCult, and I focus a lot on nostalgia for the pop culture from my childhood. But what about the pop culture of today and tomorrow? What will today’s kids be looking at fondly when they’re my age?

My guess is that they’ll be looking back at Vlad and Niki, two boys from Dubai who have one of the most successful YouTube channels in the world. The boys, (aged 8 and 6) began making unboxing videos in 2018, and have become internet superstars just by having fun. Their parents run 21 YouTube channels in 18 languagues, and their main channel has over 65 million subscribers. These kids are huge stars with today’s kids, with the #1 YouTube channel for boys, and the #2 channel for families.

Vlad & Niki” has attracted more than 181+million subscribers worldwide, 69+ million subscribers to their English Channel and 99+ billion views, while averaging five billion monthly views on 21 channels and translated into 18 languages.

The energetic videos center on the boys’ daily life adventures, which are brought to life with special effects and animation, superhero narrative, toy testing, and catchy songs. Last year, Vlad and Niki introduced Christian – the boys’ new baby brother, who is delighting in his older brother’s antics. Their mother even gets into the act in some videos.

Now, in partnership with Zuru Toys, Vlad and Niki are getting in the blind box toy business, and they’re doing it in a big way. Vlad & Niki Superhero Surprise provides a complete unboxing experience, allowing kids to bring the included comic book & the story to life! Each super-sized surprise egg features over 20 surprises including mask and cape, Super Hero Vlad and Niki figurines, Baby Christian figurine, a dinosaur or robot figurine, two die-cast car, slime egg, light up skateboard, wrist snap-band, stickers, tattoo and much more.

Vlad & Niki Superhero Surprise is packaged in a giant egg (with ears) and will be available exclusively at Target beginning June 21. You can check out Vlad and Niki’s super-fun and bizarre video of them playing with the Superhero Surprise here…

Next week your PopCulteer will get into the act with his own unboxing video of Zuru’s Vlad & Niki Superhero Surprise. You’l get to see my real-time reaction to seeing these cool toys in person for the first time. I should warn you that superheroes, dinosaurs, robots and toy cars are pretty much in my wheelhouse, so I’m really looking forward to this and may not be completely objective.

I won’t be flying around or chasing dinosaurs or anything though…not at my age.