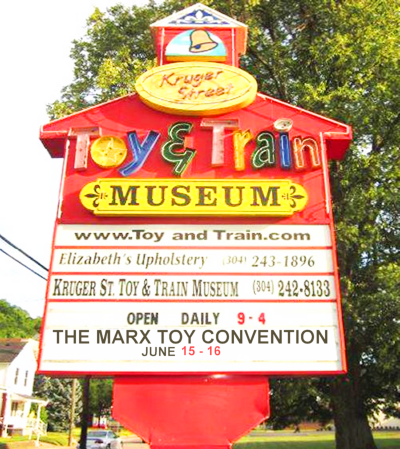 After one year off due to the pandemic, Marx Toy Convention is happening again this year, and it happens Friday and Saturday at  The Kruger Street Toy & Train Museum in Wheeling.  Your PopCulteer is thrilled to be going to this toy show, which is one of the most enjoyable in the country. I can confess now that last year, in the middle of the pandemic, a small group of convention regulars, including yours truly, kept our hotel reservations and gathered for an informal get-together, where we got to see each other and buy and trade toys while trying to stay as safe as possible. It was a sanity-preserving trip, but it wasn’t a real substitute for the actual convention.

This year, we’re running up for the first day, then we’ll make a brief stop in Moundsville where Francis Turner will re-open the Marx Toy Musuem for one night only for a private sale. Then we have to skitter off for a top-secret adventure. However, if you can’t make it up Friday, give Saturday a shot. What better way is there to spend the day before Father’s day than visiting The Kruger Street Toy & Train Museum and maybe buying Dad some of the toys he cherished as a child?

This is seriously one of the most fun toy shows there is. A few years ago I compiled an index to all the Marx Toy coverage I’ve featured here in PopCult. Since then we’ve left the Gazette-Mail and have new URLs, so here’s a revised and updated index to Marx Toys in PopCult…

Just about every time I’ve gone, I’ve brought you photos or videos or words to show how cool this event is. As promised, today wer’e going to provide a casually-assorted index with links to the best of our coverage of the Marx Toy Convention. 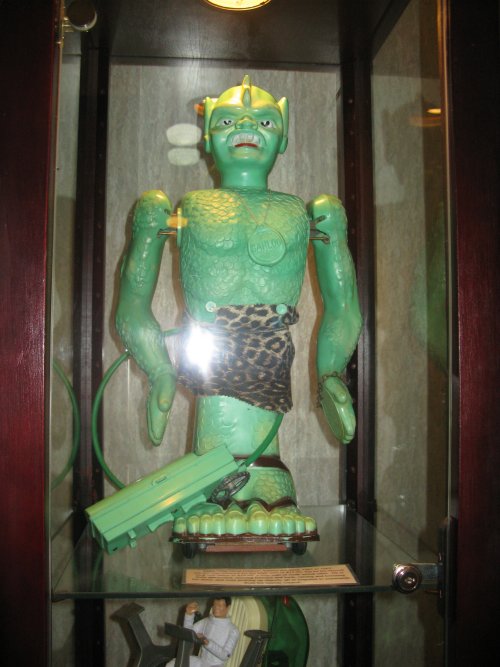 “Would you like to try the Garloo Under Glass?”

Before we jump into that, I want to bring you a link to a post I did many years ago to show some of the sights you can see at the museum. In 2010, back when Kruger Street Toy & Train Museum played host to both The Marx Toy Convention and MEGO Meet, I posted a photo essay to give my readers a hint of what the museum is like. This museum is really a treasure, and anyone travelling the Northern Panhandle should make it a point to stop by. They have all kinds of toys, and you will get a nostalgia rush like you’ve never felt before.

On to the convention coverage:

We didn’t have a convention, per se, last year, but I did get to review what was planned to be the convention figure. 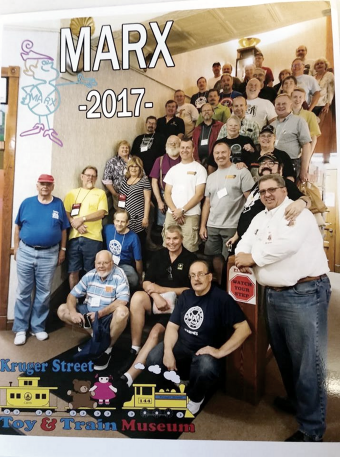 In 2017 I brought you video and photos in a couple of different posts, which you can see HERE and HERE. I also did a thorough rundown of the show in 2016.

2015 marked the 50th anniversary of Johnny West, and at Kruger Street they had a special exhibit, curated by Scott Stewart, who presented a lecture. You can see the preview post HERE.

This was also the year that James Wozniak, Stewart and Terri Coop teamed up to create a 50th Anniversary Johnny West figure, and Suzanne Hackett Morgan assembled a video made up of photos of the new Johnny from collectors all over the country. You can watch both videos in THIS POST, and read that year’s preview HERE.

In 2014 we took Lee Harrah and Mark Wolfe to Wheeling with us, and Mark provided the ultra-cool photos of Kruger Street in his incredible photographic style. The first time I covered The Marx Toy Convention proper was in 2013, although I’m pretty sure that I’d been going since 2009.  See, back then I was sort of killing myself producing video of FestivAll for Radio Free Charleston, so my visits to the Marx Toy Convention were usually just a quick drive to Wheeling, visit and buy stuff for an hour, then drive back, so I didn’t have time to take many photos.

That’s most of our Marx Toy Convention coverage (minus several redundant preview posts from years past) but we also have the now-closed Marx Toy Museum to talk about. 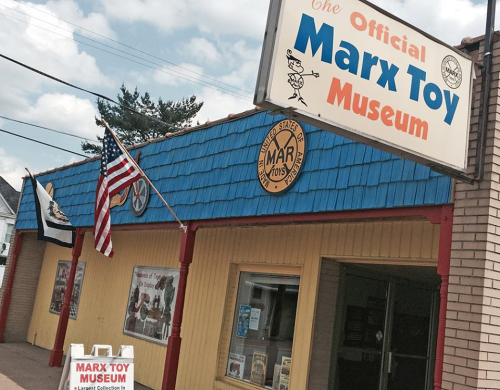 Our first visit to the Marx Toy Museum, the brainchild of Francis Turner, was in 2012,  and we marked that momentous event with a five-part photo essay.  I took so many photos that I had to break them up into different sections: Meet The Museum; Marxism Takes Over The Toy World; Playsets and Plastic People; Girl’s Toys; and fnally my personal favorite, Johnny West and the Cowboys.

In 2016 we broke the sad news that The Marx Toy Museum was going to close. We noted the closing date, but one year later, Francis opened the doors for one night for a private sale, and let everyone know that American Pickers had visited after he closed his doors. One year after that, Francis opened the museum doors one more time, and told us The Ballad of Big Loo.

Be sure to check PopCult next week because I’m sure we’ll have plenty of photos, and possibly some video from this year’s show.