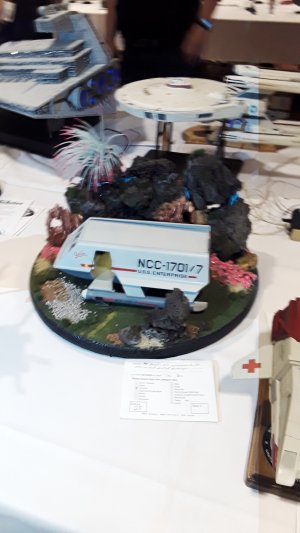 Here’s the first part of our look at the awesome model contest at WonderFest, which took place last weekend in Louisville.

I need to make a confession first. I had a camera disaster of sorts right before I took these photos. I fired up my trusty Canon, and the battery warning flashed on, right before it went dead. I found an unadorned table in the room and put in fresh batteries, and…I got the warning again. My 13-year-old camera seemed to have finally given up the ghost.

It wasn’t a complete disaster because I still had my phone. The only problem with that is, my phone weighs nearly nothing. It has no heft to it. And I have Myasthenia Gravis, and when I get tired or hot, my hands get really shaky.  About half of the photos I took are unusable, and as a result, some of the best models won’t be shown here. It sucks, but I’m doing the best I can.  Apologies in advance for any blurriness you might encounter over the next few days.

Also, the model room was packed with people who have no sense of photographer ettiquette. If you take more than two seconds to snap a photo, somebody will walk in front of your camera. There was one young lady there with a bright green shirt who apparently thought she was the only person in the room taking pictures. I got about two dozen shots of her hands, elbow or camera.

After shooting about 500 photos in the model room. I went out to the hotel hallway and found a comfy chair to rest and wait for Mrs. PopCulteer to show up after she was waiting in line to get some stuff signed by Greg Nicotero. While there, I was able to fiddle with the Canon and get it working again. However, the model room had become a bit like The Black Hole of Calcutta, and yours truly was pretty well spent. At this point my hat was 70% water.

And I hadn’t made my “buy stuff” run in the dealer’s rooms yet, so I didn’t go back in to fight the teeming masses in the model room again.

Even with that, I have several dozen cool images to share with you in the coming days. First up, we have vehicles. This is everything from spacecraft to rockets to The Dude’s car from The Big Lebowski.

Captions will be sparse because I’d rather be silent than stupid. 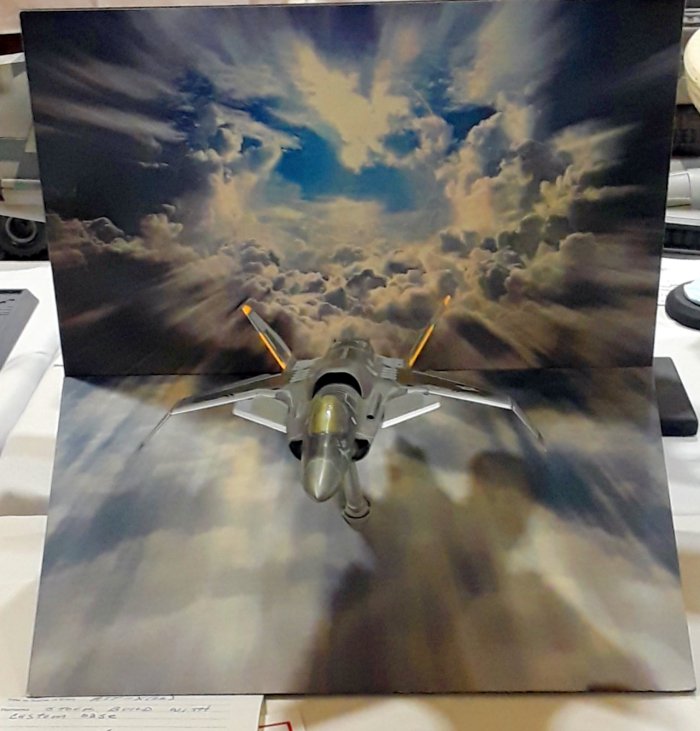 We’ll start with this cool mini-diorama of an aircraft in front of a cool zoomy sky. It would look more impressive if I’d had my camera with a flash. 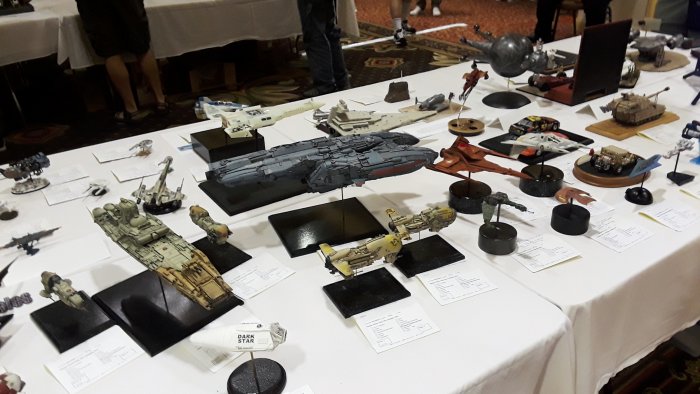 A table filled with amazing spacecraft models. You’ll see a few more pics like this. 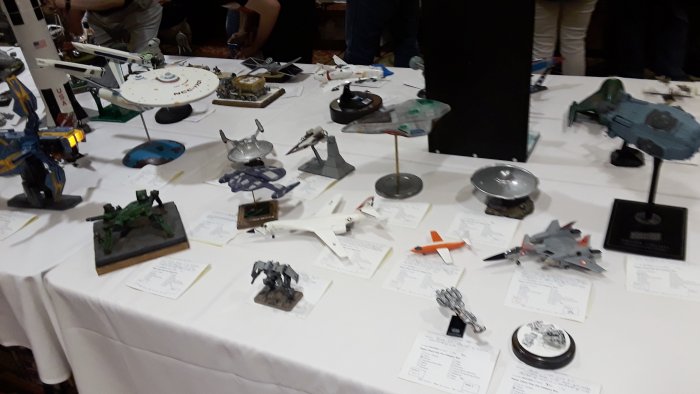 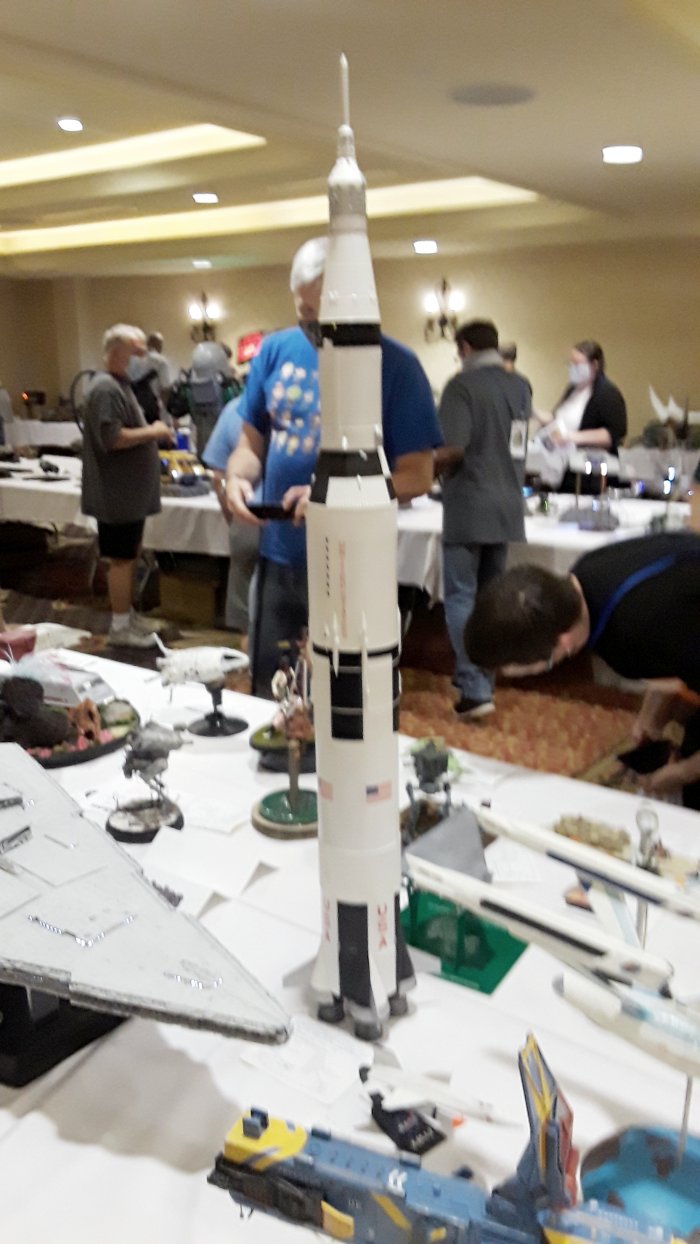 Ya gotta love a Saturn V. 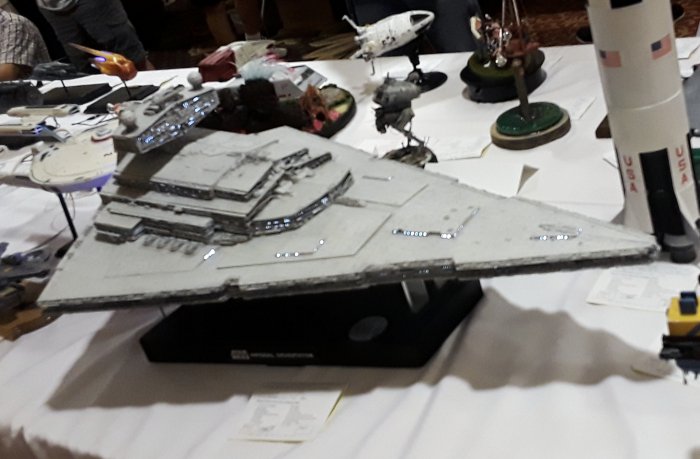 Go ahead and hum the “Imperial Death March.” You know you’re hearing it in your head. 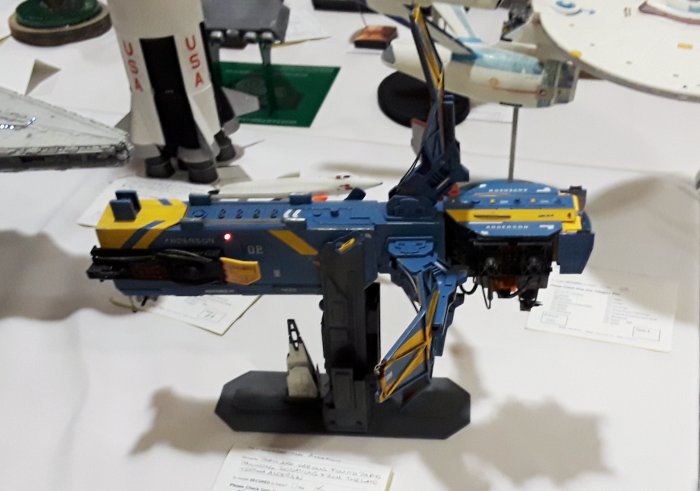 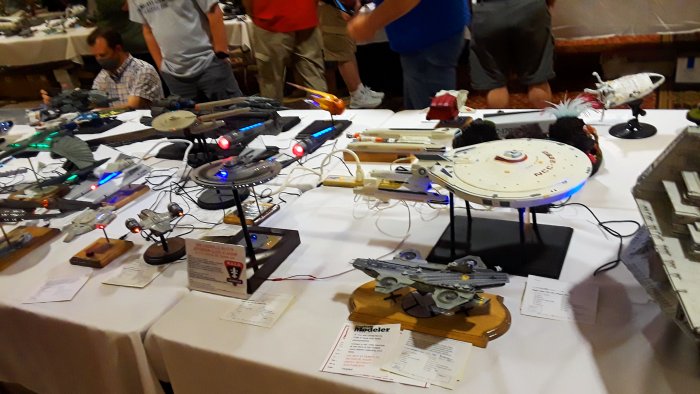 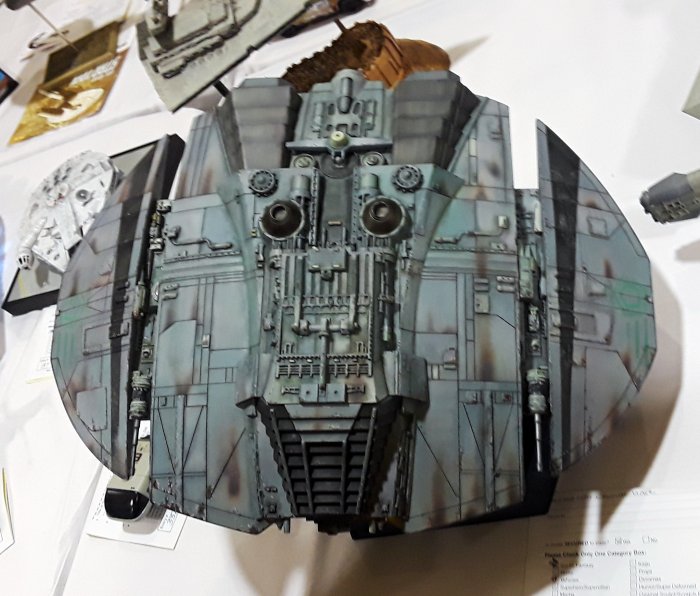 This model was huge, and looked really cool. I wish I could remember what the hell it is. Somebody want to help me out in the comments? 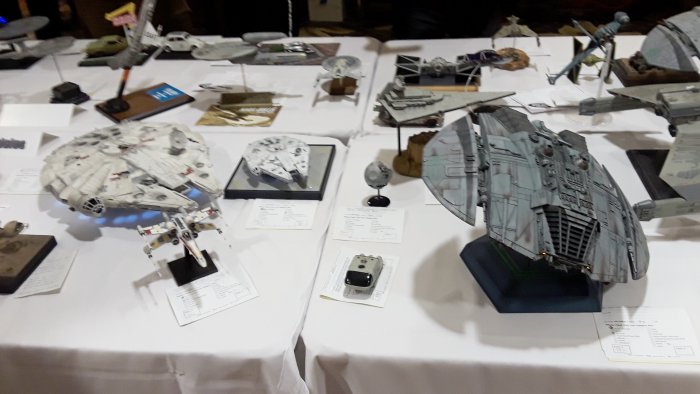 Here it is from another angle, with the Millenium Falcon and other stuff. 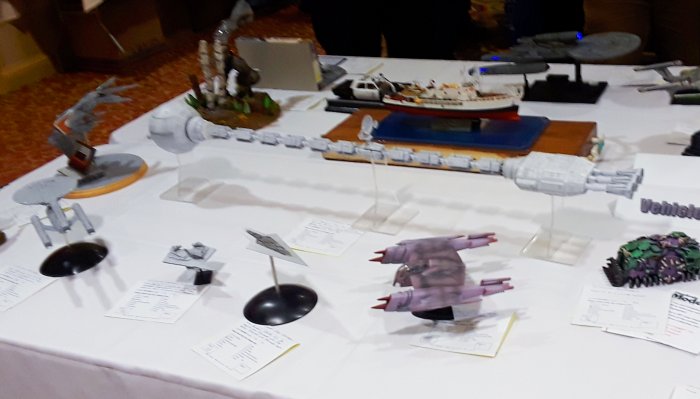 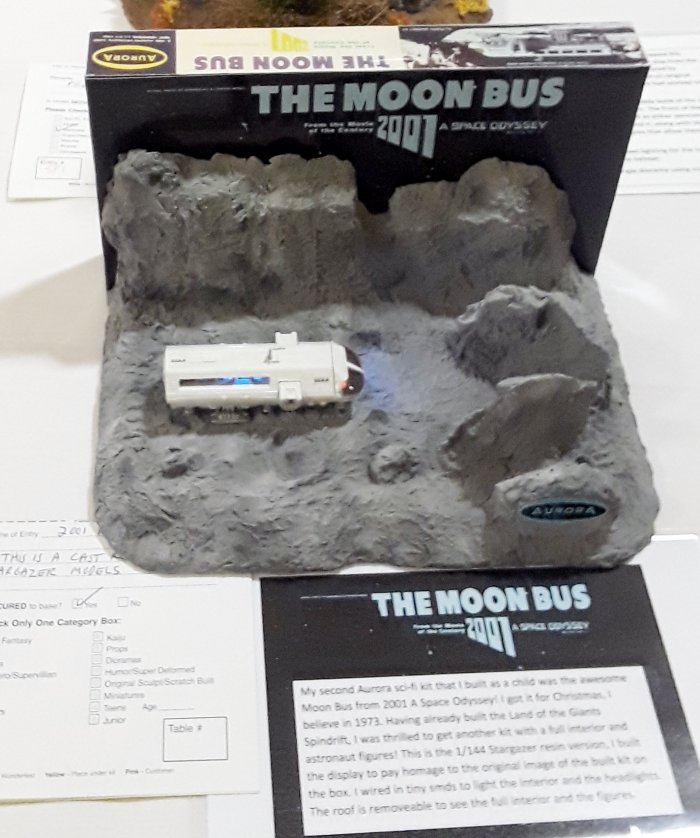 A build-up of a vintage Aurora Moon Bus kit, from 2001: A Space Oddyssey. 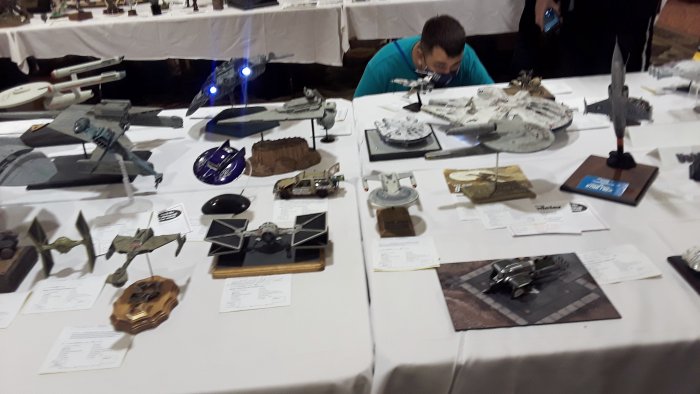 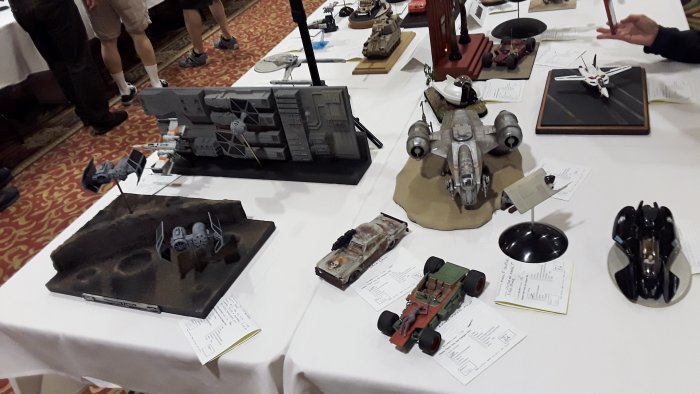 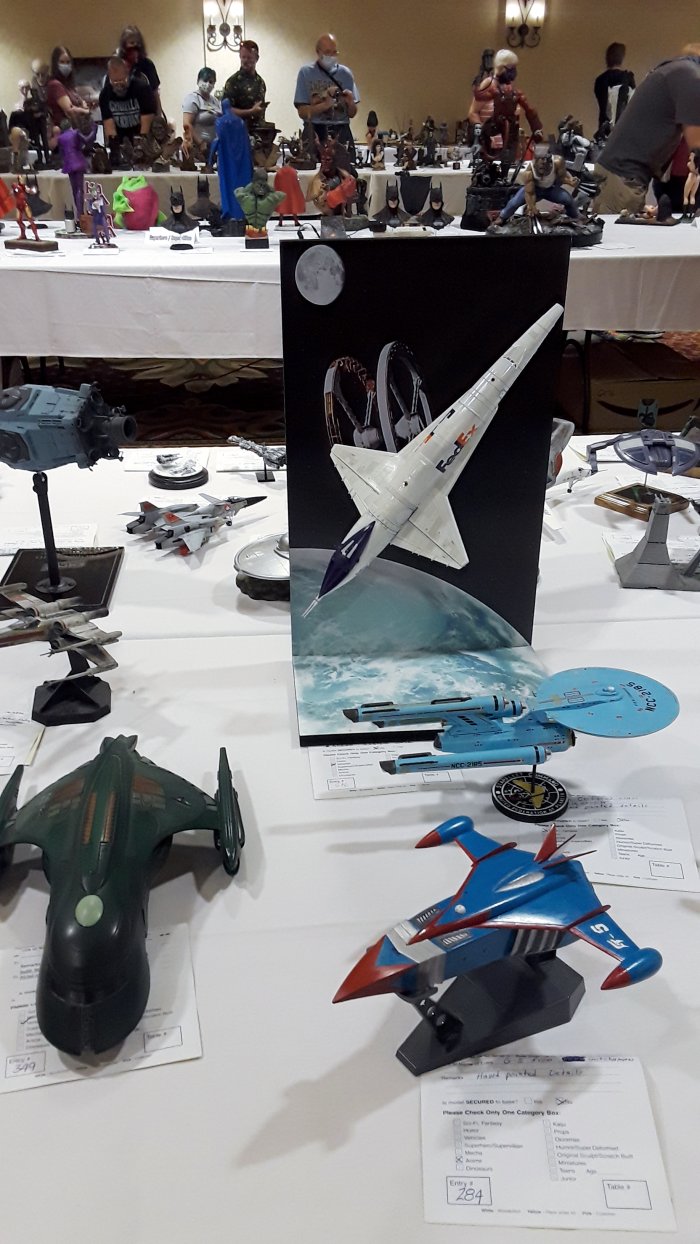 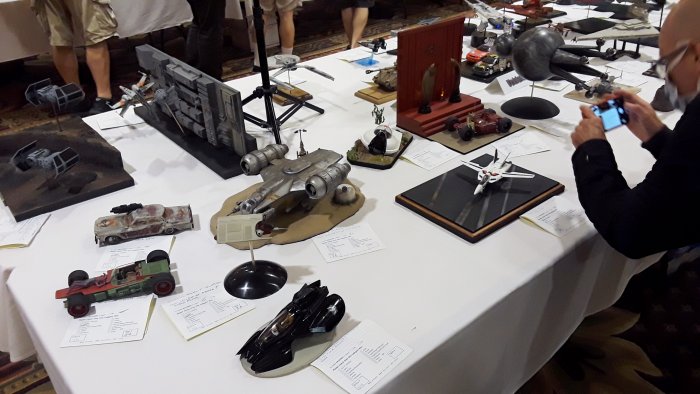 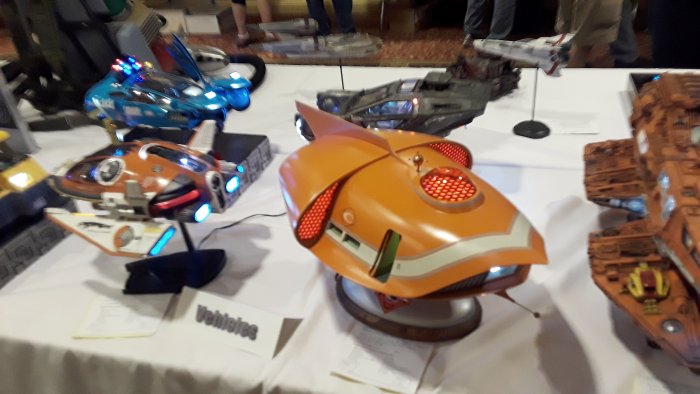 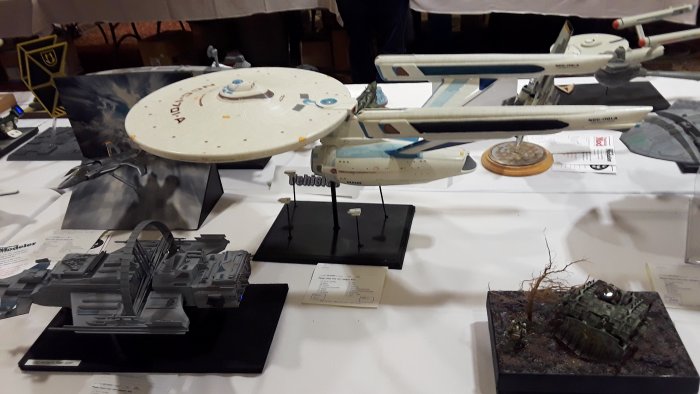 I had to include at least one shot that features a Constitution Class Starship. 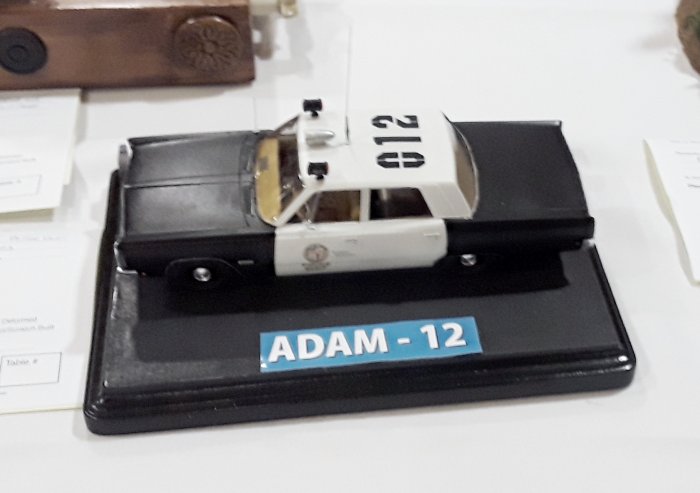 Amid the spaceships, you’d find the occasional TV-inspired car. 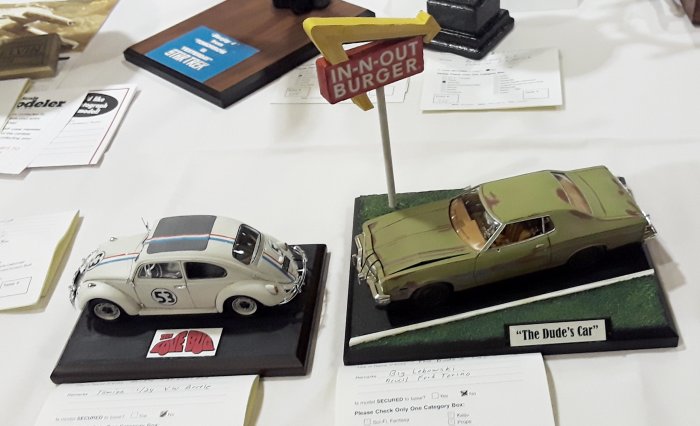 And a few movie-inspired cars, too. I wonder if the Dude’s car included the homework in the backseat?

That wraps up our look at the vehicle models of WonderFest. Later this week we’ll bring you glimpses of monsters, heros, dioramas and maybe even some cheesecake.