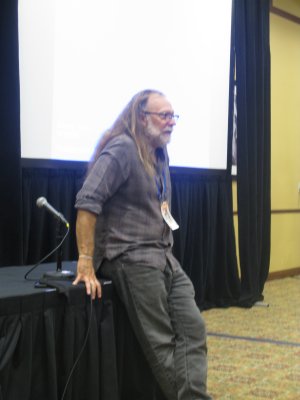 Your PopCulteer has returned from WonderFest USA in Louisville, and it was a surreal blast going to a convention again for the first time since the onset of the pandemic. We had tons of fun, got completely exhausted and spent too much money on cool stuff.

I’ll be posting photos of my convention swag on Friday, but today we’re just going to get our toes wet with the first part of our convention recap.

While I had been thinking of going to WonderFest this year, the primary motivating factor was when Mrs. PopCulteer, Mel Larch, discovered that Greg Nicotero (seen above), the executive producer of The Walking Dead, was going to attend and speak about his other TV series, Creepshow. The first time we ever went to WonderFest was because Nicotero was talking, and it was fun to go hear him again. 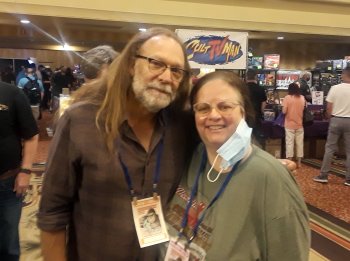 Thanks to a fortunate coincidence in the dealer’s room, Mel’s first non-family, post-pandemic hug was with Greg Nicotero.

My first non-family, post-pandemic hug was with Steve Stovall, the organizer of the Kentuckiana GI Joe Toy Expo, which I’ll be telling you about next month.

Hugs aside, because we were there well before the doors to the model contest room opened at noon, we headed upstairs to grab a good seat for Greg’s panel with Frank Dietz, where they showed an episode of Creepshow that Frank had written, starring The Walking Dead’s “Eugene,” Josh McDermott. 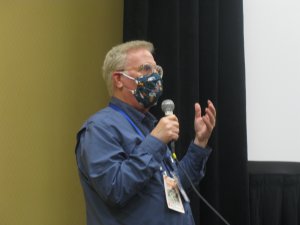 We got there more than an hour before the Creepshow panel, which meant that we witnessed the whole panel prior. Happily, that panel featured Rick Sternbach, a legendary science fiction artist who has designed most of the Star Trek universe spacecraft and vehicles since Star Trek: The Motion Picture, in 1978. It was a real treat to hear him talk about growing up and geeking out on Classics Illustrated science fiction adaptations and The Twilight Zone and The Outer Limits, plus so many classic science ficion novels and magazines.

He also spoke at length about the design process for Star Trek, and touched on how they fabricated the miniatures. He was also on the team that restored the original 11-foot model of the U.S.S. Enterprise for The Smithsonian, and he spoke about that. His talk was accomanied by a particuarly cool Power Point presentation.

After those two panels, the model contest room was open, and I will bring you photos from that mind-blowing experience Wednesday and Thursday. I didn’t take many photos in the dealer’s rooms, but you will see those below. I’ll save my camera horror story for tomorrow, too. Today you’ll get a brief look at the dealer’s room.

One whole wing of the big dealer’s room was devoted to Lost In Space. Judy Robinson herself, Marta Kristen was on hand, meeting fans and signing autographs, and there was plenty to see. Much of the wardrobe from the show was on display, but yours truly managed not to get a usable photo. There was a table full of ultra-rare merchandise, a recreation of the control panels from the bridge of The Jupiter 2, and, much to my surprise, four-and-a-half full-sized Robot B9s. 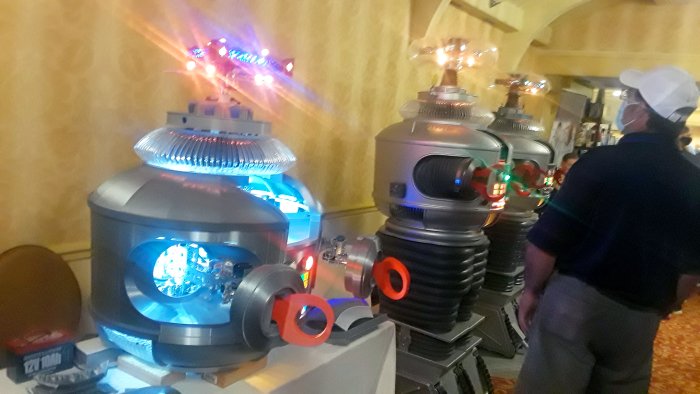 It was B9 heaven. All told, there were four and a half life-sized Robot B9s in the room, and as you can see at the top of this post, Bender, from Futurama, was on hand to hang out with his drinking buddies. 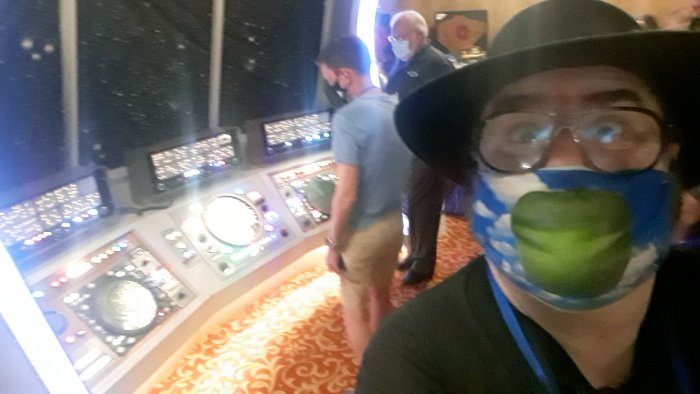 Yours truly, pretending to be on the bridge of the Jupiter 2. 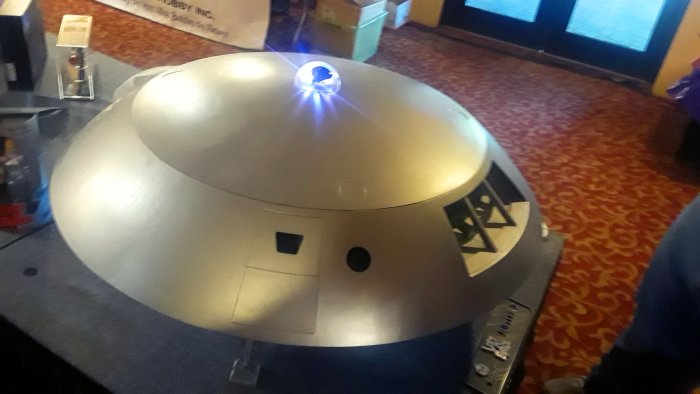 And here’s a large and very impressive scratch-built Jupiter 2. Speak of the devil! 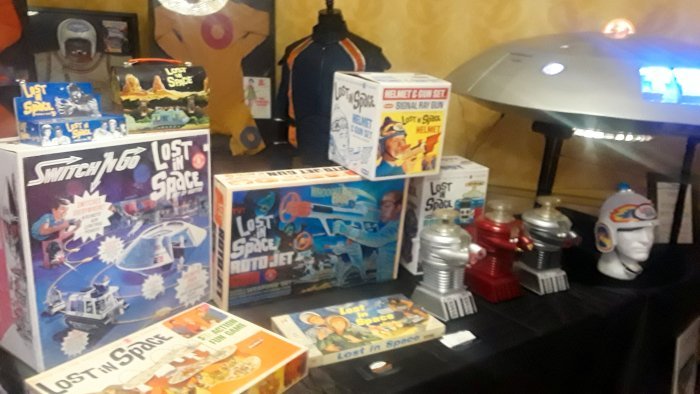 As a kid, I lusted after every toy on this table.

At the direction of Mr. Nicotero, I had to get photos of this one dealer, selling models of his own design. Many of these turned up in the contest. 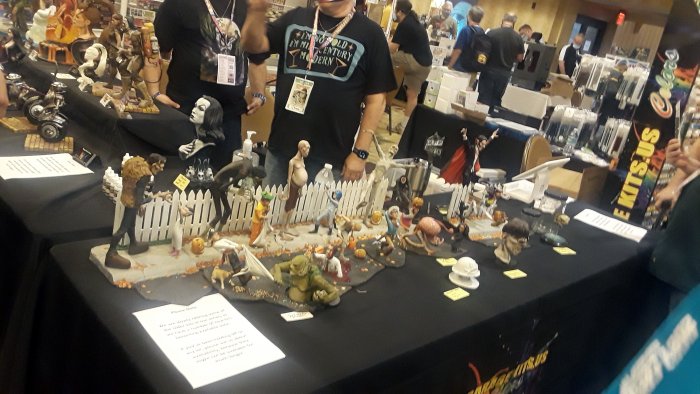 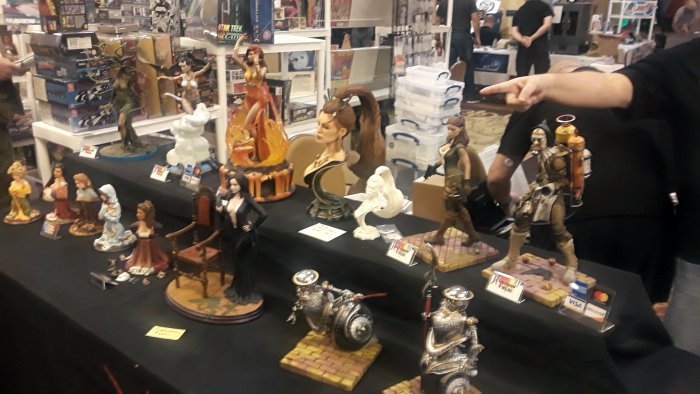 In the other dealer’s room a fella had a massive display of fantasy Marx-style Playset boxes for which he had compiled and created accompanying sets. 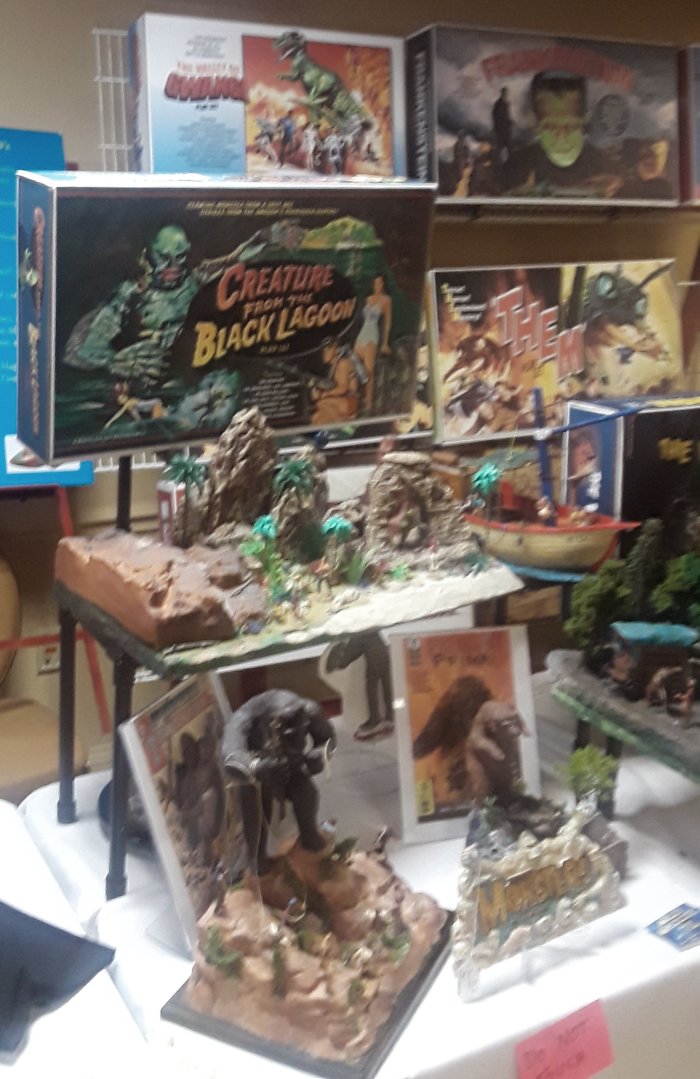 And today we leave you with this amazing and gigantic model of The Cyclops from the Ray Harryhausen classic, “The Seventh Voyage of Sinbad.” This was several times larger than Harryhausen’s actual animation model. 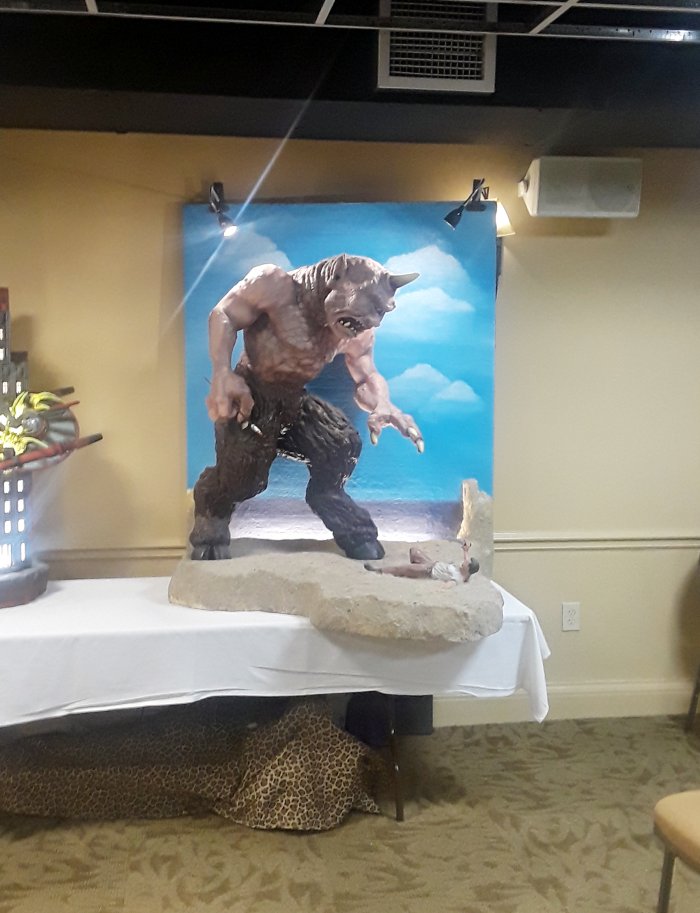 Tomorrow we will bring you our first batch of photos from the model room.