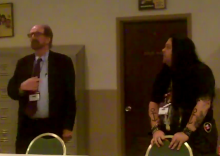 This morning we bring you ShockaCon’s Evolution of the Zombie panel from last Saturday.

David Crawford played Dr. James Foster in George Romero’s Dawn of the Dead. He’s appeared in many horror films and is currently filming Night of the Living Dead: Genesis.

Lee Harrah is the lead singer of the band, HARRAH, and is also toy expert, member of Ghostbusters WV Division and a scholar of the zombie in film history.

Together they trace the Evolution of the Zombie in film, from White Zomibe in the 1930s to today.

We’re not done with our ShockaCon coverage yet. Keep checking PopCult all week as we crank out the videos like nobody’s business!