Another Beth of Fresh Air 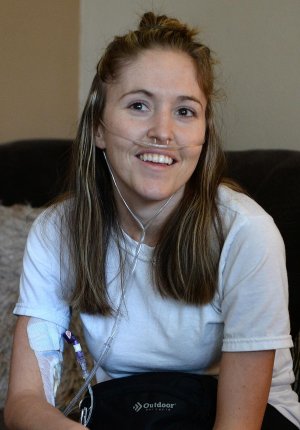 I’m taking a moment away from my normal routine of telling you about cool things like toys, books, comics, music and whatnot to tell you about an important thing.

Beth McCarthy, the daughter of longtime PopCult/RFC friend Tony Slack, is in need of her second double-lung transplant, and Tony has a GoFundMe page up to help with the expenses.  Beth was born with a rare medical condition and battled respiratory issues her whole life. Eventually it became apparent that this young mother of twins would need a lung transplant in order to survive.

Tony put on a variety of fundraising events under the banner of “A Beth of Fresh Air,” including improv shows with his group, The Mighty Schmucks, and they banked enough money to help the family get through the crisis, which involved Beth relocating to Pittsburgh with her mother for the surgery and a recovery period, and medical bills that stagger the imagination. I wrote about one of these in October, 2018.

Beth was on the transplant list. The family had to wait for a pair of lungs to become available.

The call came in April of 2020, and by July, Beth was back home, hopefully settling into a normal life.

But it was not to be. As Tony explains in the GoFundMe listing…

Beth received her new lungs this past April.  Unfortunately in the tradition of 2020, things have took an unexpected turn.  Beth is now hospitalized due to a series of ailments, and is facing a second double-lung transplant at UPMC.  That means more medical bills, several months of living in Pittsburgh, and all of the expenses involved with living away from home.

Beth is a real, live miracle.  After receiving her 1st transplant she got married, rode bikes with her children, and went hiking.  Lets do what we can to make sure she gets back to where she belongs again.  Which is raising her beautiful babies and growing old with the man of her dreams, Tim.

In addition to the need for a 2nd lung transplant,  Beth’s mother April has decided to become her primary care giver.  This involves April putting her own job aside to give Beth the care she needs up until,  and after the transplant.  Due to this April will also be in need of financial assistance to help cover her own bills and expenses.

Let’s show 2020 that we are stronger than anything it can throw at Beth!  And more than anything, let’s pray for this beautiful and strong young woman.

Tony has been a friend since before he appeared on the very first video episode of Radio Free Charleston. Beth is his pride and joy, and she is a very special young woman. I hope you consdier donating to this cause.

Bill Lynch wrote two great profiles of Beth in The Charleston Gazette-Mail. These are hidden behind a paywall HERE and HERE.  In the first from 2019, Bill spoke with her Dad before her operation…

The Air Force medical technicians missed the situs inversus diagnosis, and they had no idea at all about Kartagener’s syndrome, the reason why Beth is tethered to an oxygen tank, the reason why she’s waiting for a double lung transplant.

Kartagener’s syndrome is a rare condition related to the situs inversus but affects the fine, hair-like cilia in her body, particularly the cilia in Beth’s lungs.

Tony said, “The cilia are supposed to catch the stuff that’s in the air and then you sort of cough it back up. That’s normal. With Beth, the cilia are deformed. Stuff falls in, and it just gets trapped in there.”

It’s made her susceptible to colds and respiratory infections. Through her childhood and teenage years, there were trips to respiratory specialists and periodic hospital stays. Tubes were put into each of her ears over a dozen times to help fend off fluid buildup and infection.

Two weeks after surgery, Beth left the hospital and moved into a nearby Airbnb with her mother. They spent the next two and a half months going back and forth to doctor’s appointments and therapy sessions. Beth sometimes walked in a local park during the day, but otherwise, generally, stayed in.

Beth kept in touch with her children through FaceTime on her phone. Tim, her father and her brother, Joe, would visit occasionally.

Her breathing is much better. She said her lung function is at 57% and improving, but it’s something she’ll have to work at for the rest of her life through therapy, exercise and caution.

Even after COVID-19 fades, Beth will always have to wear a mask in crowds.

“I’m immunosuppressed,” Beth said. “When you have a transplant, they tell you that you’re trading one illness for another.”

There will also be regular trips to Pittsburgh for checkups and tests, expected hospital stays, and it’s likely that her body will reject the lungs more than once.

It will be a fight to keep breathing.

Subscribe to The Gazette-Mail for the whole story, Bill did a great job, and I’ve swiped the accompanying photos from Chris Dorst and Kenny Kemp, but I have a feeling they’re cool with this since is such a good cause.

It was known that the lungs in the first transplant were high-risk, and may not last long,  but nobody wanted to go through this again so soon.

I know that we just escaped one of the worst years on record, and times are chaotic and frightening right now, but please take a moment and consider donating to help Beth with this massive medical crisis. It’s something positive that you can do to counter all the negativity in the world right now.