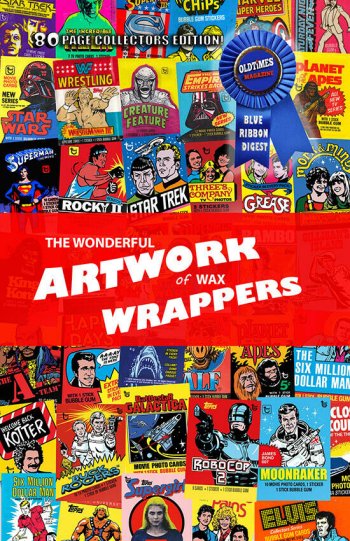 This book is a real treat for fans of old-school non-sport trading cards. It’s a compilation of Wax Wrappers, which were phased out in favor of foil wrappers with ultra-high-quality printing.

The Wonderful World of Wax Wrappers celebrates the art and innovation that was necessitated by the limitations of printing on wax paper before all that happened.

Jason Young, who put this book together, doesn’t try to create a detailed reference work. This is a slim volume of gorgeous full-color photos of vintage trading card wrappers released from the late 1950s to around 1990. There’s a brief essay in the front of the book, and informative captions throughout, but he lets the art be the star. An added bonus is that Jason is based in Canada, and some of these wrappers are variants of the ones that are familiar to collectors in the US.

Because the printing presses used for the wax wrappers were, shall we say, a tad funky, the vast majority of wax wrappers had line-art, rather than photographs. Photos just didn’t look right when printed with limited colors on food-grade wax paper.

Food-grade wrappers were used because the vast majority of trading cards included a stick of bubble gum in those days.

Translating photographic images into low-res three-to-five color images resulted in artwork that come out looking like mid-1960s Andy Warhol silkscreens. These wrappers were Pop Art before Pop Art was a thing. 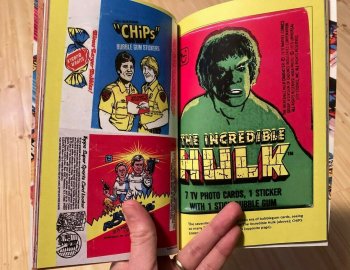 From Young’s eBay page, we see some of the TV shows that made it into trading cards in the 1970s.

In fact, on the few occasions when they did try to use a photo on a wax wrapper (Supergirl, for instance) it looked pretty bizarre. In most cases, these wrappers are like miniature billboards, with beautifully simplified images representing their subjects.

As a long-time writer for Non-Sport Update, I’m neck-deep in this stuff most of the time, but it’s really cool to have a book that just looks at the art created for this aspect of the non-sport hobby.

Most of the wrappers are presented larger than they were originally printed, and for fans of pop culture, this is a virtual timeline of the period from 1960 to 1990. We get all the high-water marks: Batman; Marvel Comics; Gilligans Island; Star Trek; Elvis; Happy Days; Jaws; Universal Monsters; WWF and several pages of wax wrappers for cards devoted to Star Wars and its sequels. Back in the day,  lots of movies and TV shows with kid appeal made their way into the world of trading cards. You’ll see a lot of them here.

The Wonderful World of Wax Wrappers is available from Jason Young on eBay, but you want to act fast. Young says that he is on his third and final printing, and if you love pop culture and trading cards, you probably don’t want to miss out on this book.