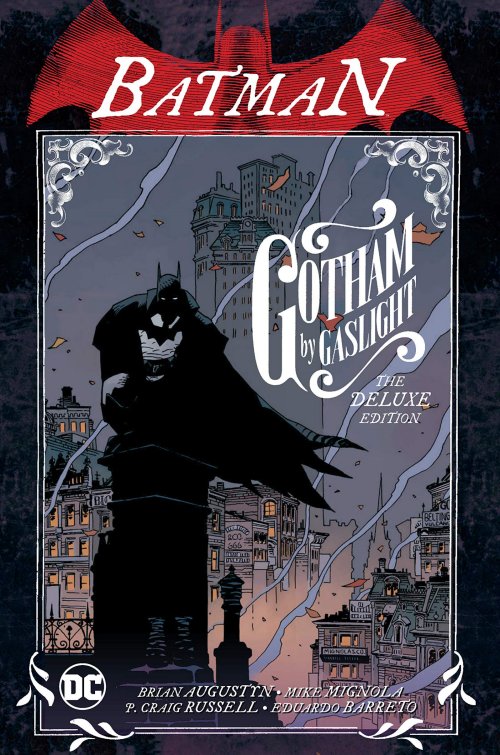 Batman: Gotham by Gaslight was the first imprint of DC Comics’ Elseworlds line, an extension of their long-standing tradition of out-of-continuity “imaginary” stories. Written by Brian Augustyn, with art by Mike Mignola (Hellboy) and P. Craig Russell (Sandman, Killraven, The Ring of the Nibelung), Batman: Gotham by Gaslight was an instant classic.

Gotham by Gaslight took Batman and placed him, origin and all, in the Victorian era, where he investigated a serial killer who turned out to be Jack The Ripper, operating in the states after leaving London. Mignola and Russell’s art perfectly captured the era, and Augustyn crafted a spectacular story in only 48 pages. 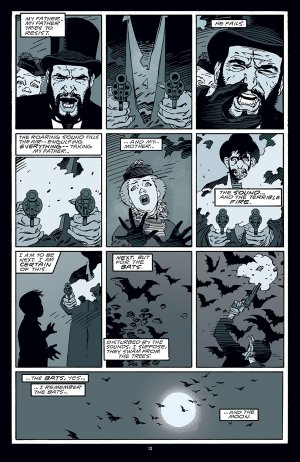 The story was critically-acclaimed and has remained in print ever since it was first published in 1989. This new deluxe hardcover includes Batman: Gotham by Gaslight, along with its sequel, Batman: Master of the Future (featuring stunning art by the late and unjustly-overlooked Eduardo Barreto). Both of thise books, originally published as one-shot “Prestige” format comics, have been collected in several different editions over the years, but Batman: Gotham by Gaslight The Deluxe Edition also adds further stories where DC Comics characters from other “universes” cross over and team up with this incarnation of The Dark Knight.

One chapter of the 2008 DC Comic companywide crossover, Countdown was Countdown Presents: The Search for Ray Palmer: Gotham by Gaslight. This story where the main DC Universe Green Lantern Kyle Rayner, Donna Troy and Jason Todd wind up on the Gaslight by Gotham Earth while searching for The Atom (Ray Palmer) was also written by Augustyn, and is a bit of a jumble, but we do get to meet this world’s version of The Blue Beetle and Man-Bat, which is really pretty cool. 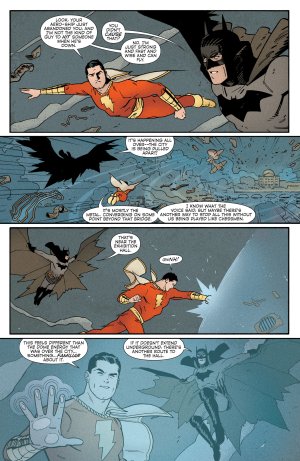 The real gem here is the two issue run of Convergence: Shazam! (seen right), which tells a story where the original Captain Marvel (aided by the rest of the Marvel Family plus Bulletman and Bulletgirl) wind up crossing across the universal divide and having an adventure with the Victorian era Batman. This story, written by Jeff Parker with art by Evan “Doc” Shaner, is an absolute delight, and really deserves to be collected along with Grant Morrison’s Thunderworld in a tabloid-sized deluxe edition of its own.

However, including it in this volume gives the collector every single adventure of the Victorian “Gotham by Gaslight” Batman in one handy volume, and it’s almost 200 pages of top-quality superhero adventure. The reader is not bogged down by decades of continuity, and best of all, except for one panel in Convergence: Shazam! there is no Joker.

The Joker is the most over-exposed, over-used character in Batman’s rogues gallery, and it is so refreshing to have him omitted from these adventures.

This book also includes a new introduction by Brian Augustyn and a gallery of images from the 2018 animated adaptation of Gotham by Gaslight.

Batman: Gotham by Gaslight The Deluxe Edition is a treasure of terrific supherhero adventures that makes for great reading and doesn’t burn out the reader with an oppressive backstory. You should be able to order it from any bookseller by using the ISBN code.