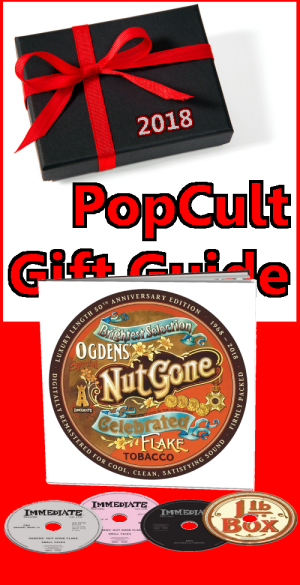 Our final pick today for The 2018 PopCult Gift Guide is a deluxe 50th Anniversary reissue of a landmark Psychedelic Rock album that most American have never heard of before. The Small Faces were very successful contemporaries of The Who in the UK, but in the States they found greater fame after the original leader, Steve Marriott, left to form Humble Pie with Peter Frampton, and the remaining members added Rod Stewart and Ron Wood and shortened their name to “Faces.”

Before the split, Ogden’s Nut Gone Flake, named after a tobacco tin, was their conceptual masterpiece. Presented here as a limited four disc (three CDs + NTSC/Region 0 DVD) set. This 60-page hardback book edition contains mono and stereo versions of the album plus a disc of rare bonus material, together with a DVD containing The Small Faces’ legendary feature on an episode of the BBC’s TV show “Colour Me Pop” in June 1968, with the highlights being their performance of “Happiness Stan” and Peter Whitehead’s promotional film for ‘Lazy Sunday’.

Ogdens Nut Gone Flake was originally released by Andrew Loog Oldham’s Immediate Records on 24 May 1968 and soon hit the #1 spot in the UK where it stayed for six weeks. Critically acclaimed and still featuring in albums-you-must-own-polls, it is by far and away The Small Faces’ best-known and most successful album.

Alongside classic single tracks like ‘Lazy Sunday’ and ‘Afterglow’ plus ‘Song Of A Baker’ and live favorite ‘Rollin’ Over’, the LP even added a conceptual twist with the story of “Happiness Stan” and the narrations of Stanley Unwin on Side 2. To celebrate the 50th anniversary, the album has been newly remastered by Nick Robbins at Soundmastering with the full cooperation of surviving Small Faces member Kenney Jones. This is the best Ogdens’ has ever sounded.

Any fan of late-60 British Rock will love this set, which at Amazon manages to clock in right below the sixty-dollar threshold to steer clear of BIG TICKET DAY.

Check out this video of the band performing “Lazy Sunday,” one of the tracks from this classic album…