This week’s video post is a repeat of a post from May, 2010, which I just discovered had all the video embeds broken at some point. So here it is again, with those videos that are still working  re-embedded this time.  More than half of them are lost to the sands of time…dammit!

When I was a kid, I was crazy about animation. I’m not just talking about Saturday morning cartoons or classic Warner Brothers shorts, I loved everything animated–commercials, broadcast network IDs, industrial films–anything with a cartoon hook had me. I was three or four years old when NBC showed a prime-time compilation of independently-animated shorts.  That was an epiphany for me. 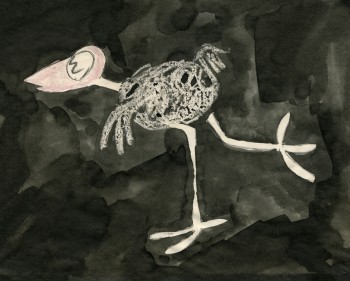 The cartoon you see above is “Moonbird,” by John and Faith Hubley. This was part of that NBC special, and it would be over forty years before I would get a chance to see this again.  The soundtrack is an actual recording of their children playing, around which they then created the animation. “Moonbird” won the OSCAR for best animated short in 1959, but there was no place for it to be seen until a few years later.

After the jump, you’ll get to read more about my life-long quest for animation and you’ll get to see the rest of the first edition of the PopCult Animation Festival, a collection of cool animated shorts from around the world.  It’ll be a weekly feature here in PopCult this Summer.

I know it’s hard to imagine in today’s world, but back in the mid-1960s quite a bit of the entertainment produced in the world was unattainable. There was no internet. Cable was a couple of decades away from exploding into the dominant form of television.  We had three broadcast networks, and a fledgling version of PBS. We didn’t even have VCRs, so we couldn’t record the cool stuff to watch again later.

So these animated gems were few and far between. I lived through this dark period as an addict who would pore over television like a prospector, looking for little animated nuggets among the boring live-action dreck.  I’d sit through “Bonanza” for a chance at seeing an animated Alka Seltzer commercial. I’d deal with the daytime dramas my mom would watch, just to get a glimpse of BactineMan! Saturday morning cartoons, which at the time were an example of the animation industry at its worst, were manna from heaven.

I had a voracious appetite for animation. As early as 1970 I was a huge fan of Monty Python, due in large part to the animation by Terry Gilliam. Thanks to a short-lived Saturday monring show called “The Curiousity Shop” I was aware of The National Film Board of Canada.

In the 70s, PBS ran a program called “International Animation Festival,” hosted by Jean Marsh. This show introduced me to the work of Zabreb Animation Studio and Bruno Bozetto, the Italian master of the absurd.

When cable TV took off in the 80s, weird animated shorts turned up as filler on HBO, and on USA Network’s “Night Flight.”  In the 90s, MTV picked up the slack with “Liquid Television.”

In that spirit, we kick off the first PopCult Animation FestivAll with work from Bozetto, Zagreb and Marv Newland.  There is no criteria for this collection, other than it’s cool animation, from any country, from any era.  Sit in front of your computer and soak in the first PopCult Animation Festival. Originally this post had nine videos, but five of them are no longer available.