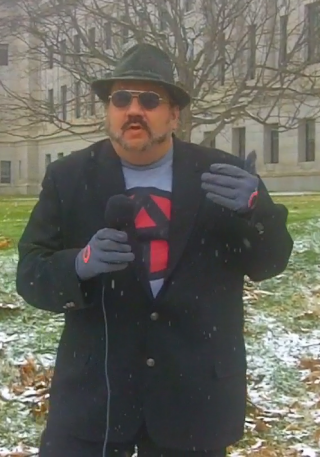 Okay, it’s the last day of 2017, which by most measures was an exceedingly miserable year, so I wanted to try to do something special.

Aside from the horrors of today’s world, with our insane leader, natural disasters, mass shootings that are perpetually “too soon” to discuss and just a general malaise that seems to have crept up on all thinking people, I’ve personally been more than a bit down because I had to put my video show, Radio Free Charleston, on hold while I dealt with my spring 2016 diagnosis of Myasthenia Gravis.  RFC is my creative legacy, and while I continue to host the radio version on The AIR, I miss producing the video show.

So what better way to snap out of a funk that to make a new RFC? I have been doing the audio version of my show, and it’s great fun and really rewarding, but I had produced the RFC video show since 2006, and while we have had gaps in our production schedule before, I had not missed a calendar year since then.

I had an ace up my sleeve. Back in March, 2016, before my diagnosis, I had put together most of an episode of the show. I had music videos from HARRAH and Pepper Fandango, plus some experimental animation that I’d done, and I even shot host segments in Senoia, Georgia, in front of some of the familiar sites used in The Walking Dead. 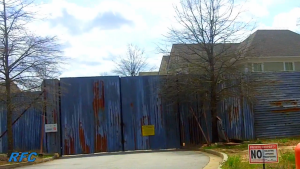 Seriously, we were right in front of the Wall at Alexandria, which is actually in a residential subdivision in Senoia, right off Main Street.

I always joked that it was my “lost” episode. All I had to do was assemble it, and it’d be ready to go. I just had to wait until I had enough free time to edit the video without giving myself a crippling headache from straining my eyes too much.  One of the issues I have to deal with from MG is eyestrain, double-vision and a general fatigue. Some of it’s from the disease and some of it’s from the medicines I take to manage the disease, but I’m just not able to crank out video like I used to.

Finding the time took a while. I’ve produced a lot of video projects since my diagnosis, but I have to space them out because they tend to take a lot out of me. I still have videos from ToyLanta in March that I need to finish. I finally rested up and set aside the time to finish this episode so that I could present it to you folks before the end of the year.

The only problem was that, when I started to gather the existing pieces of the show, it turned out to be loster than I realized. I could not find the host segments we’d shot. I was able to find every other video clip from that trip, but the host segments were missing in action. I went through twelve terrabytes of back-up files to no avail.

Rather than write-off the idea of making a new RFC, with less than two days to go and a fairly annoying snowstorm on its way, I gathered up Mrs, PopCulter, RFC Big Shot Mel Larch, and we ran to the State Capital and shot host segments in one take (except for the one part where I started yelling at a loud car). It was cold, snowing, and I didn’t have time to paint my beard, so it looks significantly more grey than I prefer to keep it, but we got the show done, and you can see it at the top of this post.

Our music in this episode is pretty darned cool. 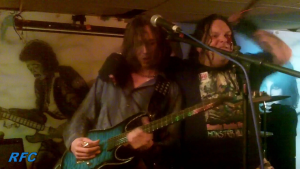 From HARRAH we have the music video for “Blood Moon.” While I posted this video before, I did so before we had the final, official mix of the song. So this is the first time that you can see the video matched up with the actual version of the tune from HARRAH’s debut album. I directed the video back in February, 2016, using footage that I’d shot of the band over the years combined with clips from the movie that inspired the song, “Messiah of Evil,” which, thankfully is in the public domain now, so we can use it as much as we want. 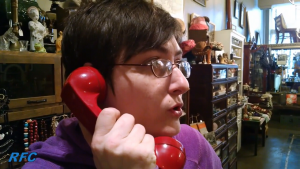 Pepper Fandango gifted us with “Waiting,” a song and video that she created a few years ago. It had been around for a while before I saw it, and I asked if I could include it on RFC. Pepper, being the sweet soul that she is, agreed, and the plan was to run this back in 2016. Luckily, the title of the song couldn’t be more perfect, given the situation.

I have to take a quick moment to thank all of my musical guests for their patience in waiting for this episode to be finished. 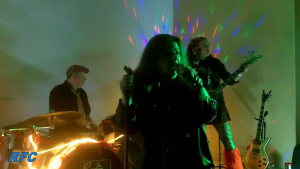 Playing us out we have Radio Cult with Mel Larch on vocals, performing Nirvana’s “Smells Like Teen Spirit,” which we recorded at ToyLanta last March.I used a snippet of this in this year’s JoeLanta/ToyLanta wrap up clip, but people kept asking for the whole song, so I obliged.

In the original host segments that were lost, I introduced music from the 2016 JoeLanta jam session, but we used that footage in that year’s JoeLanta wrap up, so in its place I decided to finish editing this video and include in our new and revised “lost” episode. 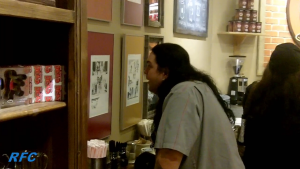 Our untitled abstract animation is something I did some time in the last five years and forgot about. It’s my art and music, so don’t blame anyone else for it. We also bring you some footage that I shot in Senoia on the day that we filmed the now-really-lost host segments, so you can see a lot of footage of the Wall at Alexandria from The Walking Dead, plus Lee Harrah and Mel in the Walking Dead Museum and Lee flipping out over original TWD comic book art.

That is the story of RFC 215, “Adventure Team Shirt.” I hope you enjoyed it. It’s just under half an hour, and it will not be the last episode of Radio Free Charleston‘s video incarnation. I’m never going to produce the show at its old nearly-weekly pace, but 2018 will see several more editions of Charleston’s favorite music video show that nobody’s heard of.

BONUS NOTES AND EXPLANATIONS ON RFC 215:

About the gloves…the reason I never wore gloves on the show before was because I couldn’t. My hands had been paralyzed for much of the time that I was producing RFC, and getting gloves on was a pretty daunting chore. I didn’t even own a pair of gloves for the longest time.

Eagle-eyed readers may notice that I am wearing gloves emblazoned with the Chicago Bears emblem. This is not because I am a big fan of the Bears. I am a life-long, loyal Pittsburgh Steelers fan. However, in December 2016, after I began treatment for Myasthenia Gravis and regained much of the use of my hands, I found myself in Chicago on a particularly bitterly cold day. I was ready to try wearing gloves again for the first time in decades. Mel and I dashed into an Under Armor store, and they had really nice gloves…for over fifty bucks. They had sports logos for the Cubs or whatever basket hoop or hockey-ball type teams they have up there, but they were really expensive. When I asked if they had something more affordable, they pointed me to the Chicago Bears section. Apparently the Bears really, really sucked last year, and anything with a Bears logo was heavily discounted. So I got a pair of fifty-dollar gloves for around ten bucks. I have joked that the “C” on my gloves stands for “Cheap.”

About the Myasthenia Gravis, and how it affected my ability to edit video: Video editing is a fairly sedentary activity, and you would think that it would not be something that could be greatly impaired by “grave muscle weakness.” However, my case is unusual. I have a mild and atypical type of MG. I am very grateful for that. I have friends with this disease and they have days where they can’t get out of bed. I have not been hit that hard yet. In my case it only affected by fingers and eyes, and I’m responding so well to treatment that many days it’s like I don’t really have a chronic ailment. I cannot stress enough how lucky I am. I have a ridiculously mild case of an extremely debilitating illness.

I had adapted to having paralyzed fingers for years. I could still type, though occasionally I would have to dictate to Mel.I could not open a water bottle by myself, which was just lovely during our Water Crisis back in 2013. I had also adapted to just using one eye while I edited video. This was problematic, and you may notice in many older episodes of RFC I squint really badly in one or both eyes.

Once I began taking medication for MG, my fingers quickly regained their strength. My eyes, on the other hand, started going in and out of double vision and on top of that, one of my meds caused me to rapidly grow cataracts. Either of those can play havoc with a person’s ability to edit video. The double vision is still an issue that will probably forever limit my video-editing time. The cataract issue has been solved rather decisively.

What this means is that I don’t have to quit editing video completely. I have cut way back. This video is the first I’ve posted to YouTube since August. But I’m not done yet. I plan to produce somewhere between four and eight episodes of Radio Free Charleston as a video show in 2018. And I’m also producing a one-hour weekly audio version for The AIR, which I have to admit is much less work.