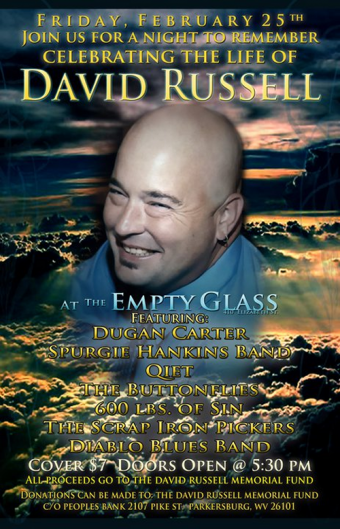 With this week’s edition of the RFC Flashback, we have decided to jump ahead about forty episodes in our chronological presentation of episodes of the Radio Free Charleston video progam.  The main reason for this is that your PopCulteer has fallen behind in his remastering of classic episodes, so rather than make a mad dash to get them done, we’re going to save them for later this year. After all, there’s no law that says we have to bring them to you in order. I mean, Star Wars started with chapter four and nobody complained.

With that explanation out of the way, we bring you Radio Free Charelston 120, “Zombie Babies Shirt” which was first posted in February 2011 as a tribute to the late David Russell, to promote a benefit show (held at The World Famous Empty Glass) for his memorial fund. You can see the poster for it at right.

The show features music from The ButtonFlies, Sierra Ferrell and The Diablo Blues Band, all of whom performed at the benefit. We also brought you the trailer for Porkchop, the Eamon Hardiman-directed movie on which Dave worked as cinematographer.  Little did we know at the time that Porkchop would go on to inspire a trilogy that has been sold on DVD nationwide and developed a cult following.  As an added bonus in this episode we have a look at the soundcheck version of “Get Loose” by Beaver Knievel.

It’s been nearly seven years since Dave died. I wrote about it here in PopCult. He was a true positive force for the creative arts here in town, and he will be greatly missed.  His sudden passing caught his family off guard and left a void in Charleston’s creative community.

This was one of our most bittersweet episodes, but I think we did Dave proud.