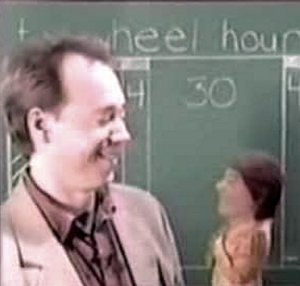 Originally funded by HBO, the premium cable network passed on the special after filming the pilot, and it wound up shown one time only on Comedy Central a couple of years later. Hosted by Hodgeson, with a cast of comedians and puppets, The Television Wheel could have been one of the coolest comedy shows in the history of TV if it had been picked up as a series.

For The Television Wheel Hodgeson conceived a sketch show packed with short blackout skits that all took place around a single stationary camera. The stage was a huge rotating monstrosity that moved from one scene to the next, twirling around the camera and allowing the cast and crew to work on scene changes out of view. The Television Wheel made judicious use of real-time camera tricks like mask framing and forced perspective to create vastly different scenarios with its limited space. The show was not really designed for a live audience, since all the action was directed at the camera, and all an audience could do is watch what was going on “backstage.” At the taping the small audience followed the action on big screen TVs situated around the room. 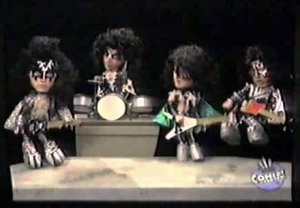 Aside from a large cast of hilarious puppets, The Television Wheel had a cast that included Hodgeson, Morwenna Banks, Steve Bannos, David Cross, Paul Feig, Doug Benson, Melissa Samuels, Andy Kindler and Fred Stoller. In the clip above you’ll see the show, preceded by a 12-minute documentary feature that gives the full history of the creation of the show, which was originally called “The X-Box.”

It’s almost criminal that this project never made it beyond the one episode. It was conceived as a commercial-free half hour, so when Comedy Central aired it, they included the documentary to pad it out to an hour, and put all the commercials in the documentary half, so that the actually “Wheel” would run uninterrupted. The Television Wheel was really the first new take on “live” comedy on television since the days of Ernie Kovacs.