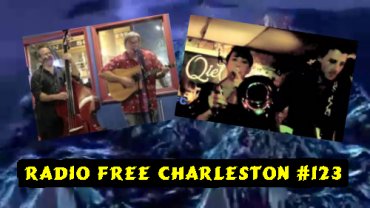 This week we venture once again back to March, 2011, as Radio Free Charleston was on a roll with a weekly run of terrific shows. This episode featured the first non-FestivALL solo appearance by Andy Park on the show, and the first-ever performance we filmed by an early line-up of QiET.

We also present the second song that we’d recorded with Roger Simms performing in the back of a pick-up truck on Capitol Street, and we have a short film by MURFMEEF and remastered CGI animation by Frank Panucci.

Host segments for this show were shot at Gallery 1031, and my performance in this show was pretty sub-par, as I managed to get the name of the gallery wrong at one point, and nearly mangle Deron Sodaro’s name, even though I knew him for almost twenty years at that point. Still, I got to wear my Green Lantern shirt to give the show its title before Big Bang Theory forever ruined wearing DC Comics shirts in public.

Next week we’ll continue our trek through March, 2011 with a show that features music from Electro Biscuit, Slate Dump and Red Audio.