Today in The 2021 PopCult Gift Guide we are going to recommend some prints, posters and other wall hangings which will make great gift ideas for the folks on your holiday shopping list. All of these are online only, and there will be a secondary link to their online store, just in case you want to see what else they have to offer. 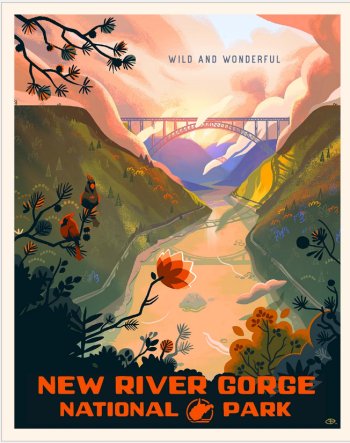 $40 plus shipping from Hero Complex Gallery

This cool travel-style poster of West Virginia’s New River Gorge (the newest of our National Parks) is perfect for any fan of Glen’s, and any fan of West Virginia’s natural beauty, who wants a cool souvenir of the gorge, done up in a wonderful style. The fine art Gliclee measures 16″ by 20″ and is limited to 255 copies, so you might want to hurry on over to order it.

Glen Brogan is the type of artist that makes his fellow artists want to give up and pack it in. Glen is a friend, and I’ve been recommending his art in The PopCult Gift Guide for years.

With a sleek style and a strong appreciation of the coolest elements of pop culture, Glen has made a name for himself with exhibits in New York and Los Angeles and work commissioned by Disney, King Features Syndicate, Marvel Comics and many more top companies. 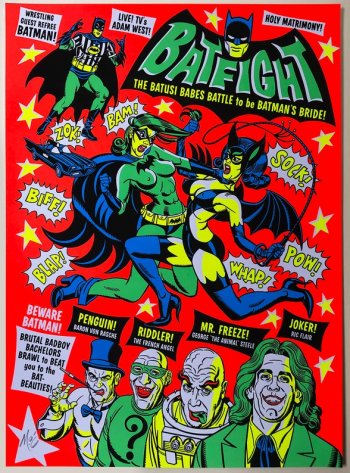 $50 plus shipping from Mitch’s Etsy Store.

This print grabbed my eye, and as soon as I can find a spare wall, I’m getting one for myself. It’s perfect for any fan of the 1966 Batman TV Show, old-school professional wrestling or just the amazing art of Mitch O’Connell.

Mitch is a legend in the world of pop culture illustration. He’s been pubished in Newsweek, Time, Rolling Stone, New Yorker, Entertainment Weekly, GQ and Playboy. His newspaper work includes pieces done for The New York Times, Village Voice, Chicago Tribune and dozens more. He’s been featured in the world of rock ’n’ roll on album covers and posters for groups from The Ramones to Weezer to No Doubt to Moby. And I’m not even going to mention examples of his advertising campaigns, fine art works, tattoo designs and all the other cool stuf he does.

Here’s what Mitch says about this piece:

I put 70s wrestling, ’60s Batman and a Catfight in a blender, and this is what happened!

A hand signed 18 by 24″ hand pulled screenprint limited to an edition of only 50 using the brightest in DayGlo Water Based Fluorescent Paint. Photos are unable to capture the retina melting goodness!

Seriously casting Ric Flair as The Joker is a stroke of genius! 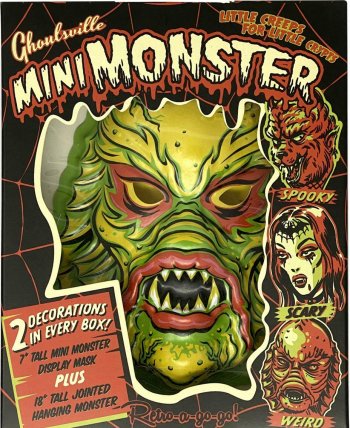 $20 plus shipping from Retro A Go-Go

I don’t often talk about it, but I’m a big fan of The Creature from the Black Lagoon, or as he is sometimes known, “The Gill Man.” Retro A Go-Go has released this cool “Mini Monster,” which features a vacu-formed Gill Creep head that bears a strong resemblance to the famed Creature of lore.

Along with the head, you get a jointed cardboard body. The head is about seven inches tall, and the body makes him over 18 inches tall, and it’s posable. So you can fit him into a tight space with his body, or just display the head. 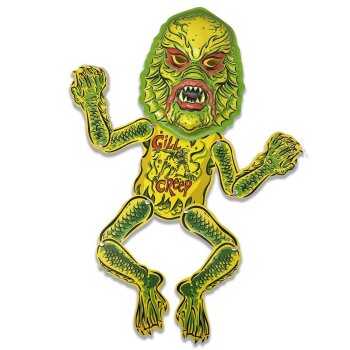 Rising from the lagoon, crawling out of the sickening seaweed, is Gill Creep. Add life and color to any boring wall of your choice. The yellow & bright lime green will make such a horrid scene! He looks like he radiates and glows. How toxic was the black water we’ll just never know!

This is the perfect gift for any monster-loving fan (with empty wall space) on your holiday shopping list. 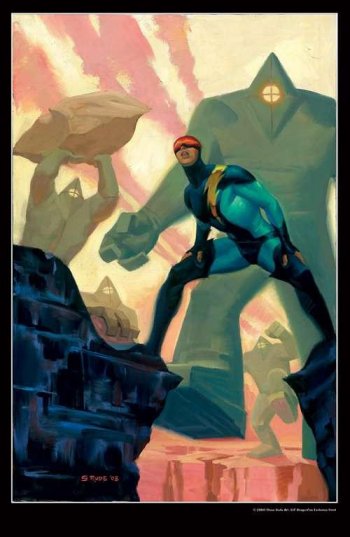 Nexus “Valley of the Living Rocks” Print by Steve Rude

$24.95 plus shipping from Steve Rude (who will sign it for an additional five bucks)

Steve Rude is a master comic artist of whom I have been a fan for four decades. This print depicts his signature co-creation, Nexus, in a cool action pose, fighting giant rock monsters. Rude’s art manages to embody the influence of both Jack Kirby and Russ Manning, while remaining wholly original.

This particular oil painting was done for the badge art for 2008 Dragon Con. It’s printed 11″ by 17″ here, and can be signed and personalized for a small additional fee. It will be shipped rolled in a tube to prevent creasing.

This is the perfect gift for any fan of Rude or Nexus, or just anybody who thinks a superhero fighting giant rock monsters would be a cool thing to have hanging on their wall.

$65 from the Pee Wee Herman Store 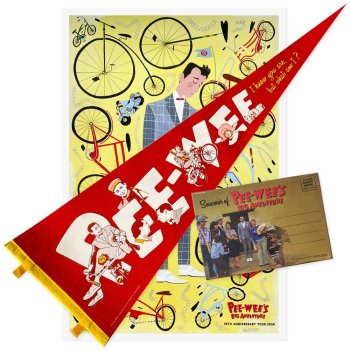 A must-have item for any fan of Pee Wee Herman, this collects some cool commemorative items for Pee Wee’s big-screen debut, and two of those items are loverly things to hang upon your wall.

This bundle includes items produced for the Pee Wee’s Big Adventure 35th Anniversary Tour, which was cut short due to the pandemic.  These exclusive items were only available to a limited number of fans at each show, however, due to the tour cancellation, these are being offered only on the Official Pee-wee Store! Extremely limited run of these items is now available.

This package includes a very cool poster inspired by the movie, and an extremely cool pennant, plus a set of 14 postcards featuring stills from the movie that, if you wish, could also be hung on your walls.

Is this a great gift idea or what? Only the most evil people on the planet don’t love Pee Wee’s Big Adventure, so you really can’t go wrong with this gift!