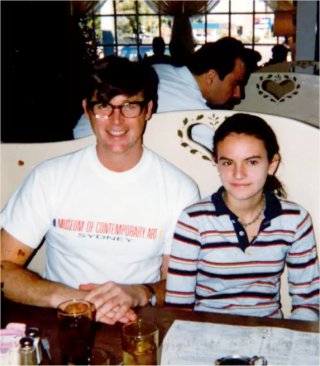 Last week John Kricfalusi, the creator of Ren and Stimpy, was the latest person-in-power to get caught up in the #MeToo and #TimesUp movement, and I’m a bit rattled by it.

Buzzfeed printed accounts by two women, one of whom I’ve been friends with on social media for years, that go beyond plausible and well into the realm of probable. John K. is accused of grooming at least two underage girls who wrote him fan letters to be his “protégé,” moving one to Los Angeles when she was 17 to act as his girlfriend.

You should follow the link and read the original article, if you haven’t already. It’s sordid and sickening, pretty damning stuff. Some of the images accompanying this post come from Buzzfeed’s article. At the head of this post you see John with Robin Byrd, one of the women in question. This photo is from when they were dating. She looks like she was 12.

What makes all this worse is that it was apparently common knowledge in the animation community that they were in a relationship.

A little history about why this is such a gut punch to me is in order. If it hadn’t been for the articles that I wrote for The Charleston Gazette about Ren and Stimpy with Mel Larch, beginning in 1991, there probably wouldn’t be a PopCult blog.

Mel and I were such big fans of the show that we pretty much blathered on about it to anyone who would listen. At one point I blathered to Douglas Imbrogno, the features editor at the Gazette, and he said, “Why don’t you write a story for me about the show?”

We did, and it went over really well. The Gazette readers liked it, and we were asked to contribute more stories about animation. Nickelodeon liked it and supplied us with tons of information about all their other new cartoon shows. John Kricfalusi liked it, and when he was fired by Nickelodeon, he sought us out to get his side of the story in print. At the time having access to the hottest creator in animation, at a time when everybody wanted to hear his story, was too big a perk to pass up.

During this time, John was very generous with his time and attention and gave us all kinds of background material that, if he’d consulted with a lawyer first, we never would have seen. John was very charismatic and seductive and more than a little pushy at times. We chalked it up to his being devastated by having his prized creations ripped away from him.

That may well have been the case. When confronted with the accusations of Robin Byrd and Katie Rice, the only reaction from John’s camp was a statement from his lawyer blaming mental illness and alcohol for some of his actions while denying the most criminal of them.

Here’s the statement that was released to Buzzfeed: “The 1990s were a time of mental and emotional fragility for Mr. Kricfalusi, especially after losing Ren and Stimpy, his most prized creation. For a brief time, 25 years ago, he had a 16-year-old girlfriend. Over the years John struggled with what were eventually diagnosed mental illnesses in 2008. To that point, for nearly three decades he had relied primarily on alcohol to self-medicate. Since that time he has worked feverishly on his mental health issues, and has been successful in stabilizing his life over the last decade. This achievement has allowed John the opportunity to grow and mature in ways he’d never had a chance at before.”

The statement goes on to deny the charges of child pornography, but sadly, denying that sort of thing is what lawyers are paid to do, and there seems little doubt that everything Robin and Katie said is true. What’s particularly bothersome about what John’s lawyer says is that it blames unspecified “mental illnesses” mixed with alcoholism for John’s behavior. This brings us to a conflict. There is a great hue and cry to destigmatize mental illness in our culture. Blaming John’s predatory sexual behavior on mental illness throws a monkey wrench into that concept.

While it is a good idea to promote a healthy public opinion of, and acceptance of, mental health issues, this explanation comes dangerously close to allowing mental illness to replace religion as the last refuge of a scoundrel.

We are now in a position of trying to determine if John’s obvious bi-polar behavior, rampant alcoholism and Cluster B Narcissistic personality disorders should be accepted as an explanation of what he did to these women. Nothing can excuse what he did, and I have no idea what he could possibly do to make it up to them, if that’s even remotely possible.

I can’t help but think that any attempt by him to reach out and attempt to rectify the damage he did would only make things worse. It seems that the best case for Robin Byrd and Katie Rice would be if John simply went away and was never heard from again. Even if we accept the statement from John’s lawyer at face value, and believe that he has been sober and in therapy for the last ten years, there’s still the question of what he did in the past. Craig Yoe, the publisher of Yoe Books and one of the world’s top comic book historians, was so disgusted by the revelation of John’s actions that he has said he will go to his warehouse and destroy all the remaining copies of the compilation of John’s “Spumco Comic Book” that his company published. As much as I flinch at the idea of destroying books, I understand and respect Craig’s decision.

John’s behavior with these two women was so toxic that it’s hard to believe anybody tolerated it. I noticed over the years that most of John’s closest associates, the folks who stood by him when he was fired by Nickelodeon, had abandoned him, one-by-one. One can assume that, as the years progressed, they eventually saw John engaging in more and more activities that they could not condone, so they left quietly.

That “quietly” part is what the #MeToo movement is about. The problem is not just that John acted like a predatory beast, pouncing on young impressionable girls who looked up to him. That’s horrible enough, but what makes it even worse are the people who stood by and didn’t do anything about it. That leaves us with the question of what happens next. Nickelodeon is currently in the midst of a huge marketing push for Ren and Stimpy and other Nick properties that have reached the age of nostalgia. Do they drop Ren and Stimpy from the future waves of merchandise? Do they let the DVDs go out of print? What about the music videos that John created for Bjork (seen right), Weird Al Yankovic and Tenacious D? Can we look at those the same now?

Do people stop working with John K.? Although his work has always appeared sporadically, he still gets the occasional high-profile gig, like creating “couch gags” for The Simpsons, or designing the Miley Cyrus Bangerz tour in 2014.

The other question is how do we view his work now? Now that we know that Ren and Stimpy was used to lure a teenaged girl to move in with him, can we enjoy the work like we did before?

Is there any way that John K. can make it up to the women he abused? 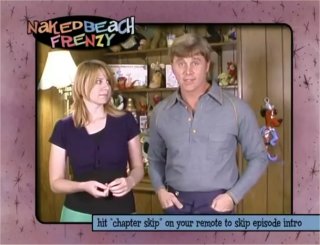 I don’t know the answer to those questions. I’m pretty wrecked by the whole thing because I sort of knew something fishy was going on, but was too far from the epicenter to figure it all out. I saw references in print to John having a teenaged girlfriend and thought they were jokes in really poor taste.

I could pick up a vibe from Katie’s social media that her association with John was uncomfortable. Even in the DVD intros to Ren and Stimpy’s Adult Party Cartoon (seen left) her body language indicates something odd going on.

I’ve lost touch with John over the years. Mel and I hadn’t spoken with him for probably twenty years. I last traded messages with him on Facebook nine years ago, and had to remind him who I was. Mel and I used our interviews with John to launch “Animated Discussions,” which ran in The Charleston Gazette until 2005, when I made the jump to PopCult and the paper quit running local movie reviews.

I’m pretty sure that if you scour the PopCult archives you’ll find more than a few articles about John and Ren and Stimpy. I always had a warm spot in my heart for Ren and Stimpy.

That spot has gone cold. This is just a sad story all the way around.