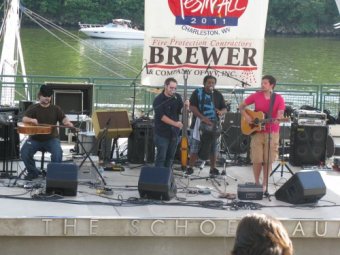 For the next couple of months The RFC Flashback will go back to the most ambitious series of episodes in Radio Free Charleston history.  In June, 2011 I decided to try and do something sort of crazy. I’d managed to crank out Radio Free Charleston on a weekly basis before, which was no mean feat since the show was basically produced by me alone, with camera help from my now-wife Mel Larch and occasional help from other friends. Since I somehow managed to pull that off (with an undiagnosed case of Myasthenia Gravis, no less), I wanted to do something completely insane. Taking advantage of the wealth of local events happening during FestivALL, I hatched a crazy scheme.

I wanted to see how close I could get to producing the show daily.

I came close enough for honors. Starting on June 20, with the show you see posted above, I delivered four episodes in four days, with a total running time of 88 minutes. The next week I delivered three more shows on consecutive days, then I skipped a day and posted the final 33-minute installement on July 1. If that wasn’t crazy enough, five days after that I dropped our fifth-anniversary show, which ran more than an hour. That was more than four hours of multi-camera performances by local artists that I shot, mixed the audio, edited and stitched together into shows in less than three weeks. 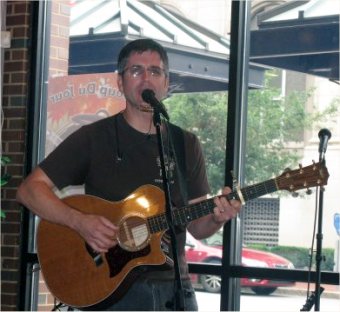 I don’t knock myself out covering FestivALL any more. It’s still a fantastic series of events, but there are plenty of people being paid to shoot video of the events now, and freed from the bonds of caregiving, I’m able to travel, which is something I couldn’t do until 2013. June offers up too many irresistable events out of town this year, so I’ll be missing both weekends for the first time.

Still, I’m very proud of what I was able to pull off back in the day, and we’re going to bring you the 2011 FestivAll episodes of Radio Free Charleston for the next couple of months, as a sort of countdown to this year’s big ole mess of a city becoming a work of art.

On this episode our featured performers were The Boatmen (seen at the top of this post), recorded Live On The Levee, the Charleston Light Opera Guild, recorded at the Charleston Civic Center Little Theater, and two great performances from the Songwriter Invitational at the late, lamented Capitol Roasters by Todd Burge (seen at left, and hey, that’s my car in the background!) and Andy Park.  You can find he original production notes HERE.